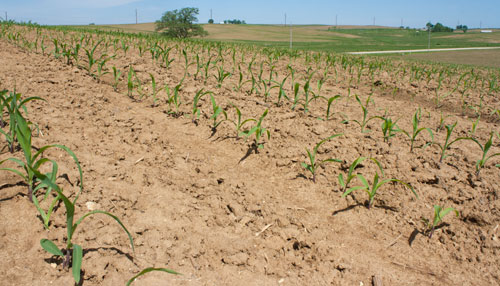 This letter is in response to the "Walmart's organic promise" article in last week's Hoard's Dairyman Intel email:

While the concepts of organic agriculture may mirror in many ways the farming approaches of our grandfathers, the reality of "modern" organic agriculture is that there is a steep learning curve to organic practices before yields respond to all the preparatory effort. The majority of today's organic farms are making a transition from row crop chemical farming, and the three years of "detoxifying" that is required for certification is merely the tip of the iceberg when it comes to recreating a "living" soil in which microbial organisms feeding on organic soil matter produce the humic products necessary to plant growth in the abundance that will support more competitive yields.

Walmart is used to contracting products at fixed "low ball" costs predicated on volume and usually expect their suppliers to "carry" (consign) the inventory in their stores. Neither individual organic farmers nor the fledgling organic marketing cooperatives are in a position to meet these expectations. Walmart is a product of the high technology world, maintaining the illusion that high volume production from high technology is always cheaper per unit. Organics is equally technological in what needs to be known to be successful, but only in the sense of being less linear about biological processes, in which there are no "shortcuts."

It is a contradiction for a volume-based price marketer to carry lines of premium (short supply) products. Thus, Walmart and organics will never be a good "fit." However, it sends a signal to production agriculture that the number of consumers who are becoming conscious of the conditions and inputs involved in food production is growing. Increases in organic units of production will generate more data on which comparisons versus conventional production are made, and the trends will be in favor of organics over chemical-based food production as the patterns of knowledge and biological-based technology are identified, reported and adapted by all organic producers.

Nutrient-dense foods will tend to win out over volume yields of empty calories when all the environmental issues and costs of production are factored in. It is already true that 100 bushels of 12 percent protein conventional grain that is 95 percent digestible yields equal nutrient value to 200 bushels of 7 percent protein GMO grain that is 80 percent digestible. Once the soils are ready, the costs to yield 100 bushels organically are no greater than the costs to produce 50 bushels organically - but for most organic farms, due to stage of transition, lack of skill assimilation and lingering confusion over differences in propogation practices, 50 bushels is closer to the average yield today, especially where plants and animals do not co-exist in the farming unit to provide humic stimulus to each other.

In terms of feeding a growing world population, the organic practices of recycling locally available nutrients are more likely to feed any local population with access to land to grow it, while the populations that have to wait for government subsidized "cheap" commodity food are just as likely to stay hungry waiting for someone to pay for it, as they cannot afford the external inputs to grow it locally. Western public policy clearly has trouble grasping the unaffordability of high technology farming in the vast low-tech populations of the world, where income is too low to finance production.

Very little is said on the issue, but the key problem with our agriculture could be our monocultural mindsets. After all, we who read Hoard's Dairyman see ourselves as "dairymen" - that is, a monocultural (single product) farmer. The production model that will yield the most food in organic production is to be "pluralcultural," that is, propogate multiple species of flora and fauna on the same farm from integrated acreage. Genetic selection changes from maximum yield varieties that require specialized external inputs to optimized yield varieties with natural pest resistance. This is ultimately why the yield-oriented conventional farmer and the quality-oriented organic farmer have trouble understanding each other. It is a specialization of skills and a financeable acquisition of purchased inputs to produce any food in volume quantities, but it is merely a conservation and recycling of local inputs (of which soil is the ultimate resource) to grow food in sustainable quantities.
- Greg Palen
Ovid, Michigan