A survivor of childhood leukemia, Robert Hershey is running to show Noah Flores, who is currently battling leukemia, that there is hope for a bright future. 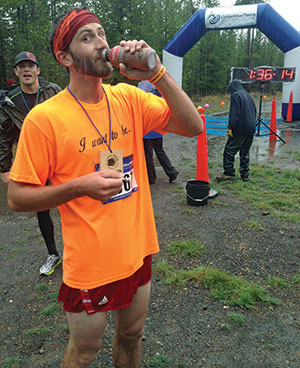 This past Thanksgiving, while many people sat down to give thanks and count their blessings, one young man in Montana chose to run a 10K race instead. Robert Hershey's decision to race was not only for himself but for a young cancer patient named Noah.

A survivor of childhood cancer himself, Robert (son of Common Threads author Marilyn Hershey) felt a drive to do more than just offer prayers and healing thoughts, as so many of us do when we hear of a young child battling serious illness. He has chosen to support Noah Flores and his family by running races, each one in honor of 5-year-old Noah.

Running for Noah
Growing up on a dairy farm in southeastern Pennsylvania, Robert was 5 years old when he was diagnosed with ALL (acute lymphoblastic leukemia). He was treated at Hershey Medical Center in Hershey, Pa., and successfully finished treatments when he was nearly 8 years old. In high school, he ran cross country races, and after graduation ventured to Montana to attend Montana Wilderness School of the Bible (MWSB), then transferred to Montana Bible College (MBC) in Bozeman, Mont. 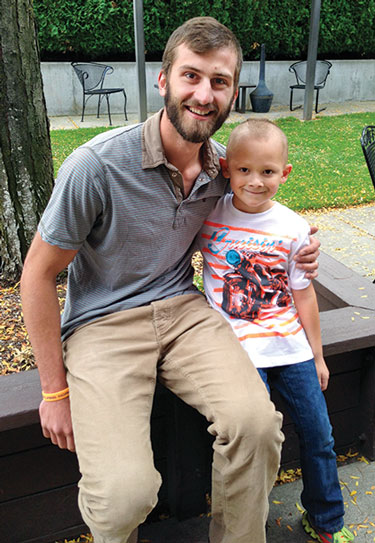 "Running for Noah" has been Robert's theme since he first learned of Noah's illness a few months ago. Traveling with friends to Yellowstone National Park last August, they passed through the town of West Yellowstone. After deciding to shop and visit the small town, they noticed many fundraiser cans for a young boy named Noah who was battling ALL leukemia.

"I was walking back to the car to meet up with my friends and passed by a lemonade stand run by two children outside the local ice cream shop," Robert said. "I gave them a pocketful of change for a glass of lemonade and read more about Noah on a sign they had."

As he talked to the kids, he asked if they knew Noah, or if he was around. They said they were neighbors and played with him often, but he was being treated in Spokane, Wash. "I told them the next time they saw him to tell him they met a survivor of childhood leukemia," Robert said. "Their eyes got huge, and they got really excited and agreed to tell him."

Just having a glass of lemonade wasn't enough for Robert to support a young boy's battle. He felt led to do more but wasn't sure just what.

"God had been impressing upon my heart about being more outspoken about being a survivor," Robert said. "All my life I always struggled with sharing it with others because often it brought empathy that I didn't know how to deal with, even though I survived cancer."

Sharing his journey
After talking it over with his wife, parents and a friend who has a niece battling cancer, Robert decided to look back to his high school running days and turn it into a sponsorship of sorts. "I wanted to run for Noah, to show him and his family that there is hope," he added.

Robert lives in Bozeman, which is about an hour and half away from West Yellowstone. With only the boy's first name and the location of the lemonade stand to go on, Robert tried to track down the family to learn more about Noah. He called one business after another until, finally, he found one that referred him to Daniel Flores' workplace.

"I told him my story," he added. "I told him how I heard about his son, that I myself am a survivor of ALL leukemia, and asked if I could run my upcoming half-marathon in his son Noah's honor. He absolutely agreed, thanked me for sharing and helped me contact their friend who was heading the fundraising efforts in West Yellowstone."

After a month of training, Robert and his wife, Hilary, traveled on a cold, rainy fall day for the run, where he came in second overall. One of the day's highlights was meeting with Noah's friends and neighbors. They established a fast relationship with these families and remained in contact with Daniel.

Hilary and Robert have traveled to Spokane to meet Noah and his family. He is being treated at the Children's Hospital Medical Center in Spokane, Wash. His family - Daniel; his mom, Agnas; and little sister, Sophie, are able to stay with him at a Ronald McDonald House nearby.

"However, when I first met Noah, I asked him to show me his port for his IV, and when he pulled down his shirt, I pulled down mine to show him my scar from having a port," Robert said. "That helped Noah realize that I had actually been there as a kid."

A hard pill to swallow
Robert said his decision to run for Noah was a way to share his own strength but also to help himself overcome emotions he has been dealing with about surviving cancer.

"I can honestly say, up to when I was 19, I struggled with bitterness and resentment, ironically. I never liked the attention I received when others mentioned I was a survivor, although it was with the best intentions," he said. "So I chose to not really speak of it. Only some of my closest friends knew, and even then it was never talked about. I never even spent time talking about it with my family."

One of Robert's cousins was undergoing cancer treatment at the same time he was and, sadly, lost his battle. "I think one of the biggest factors about why I felt that way was the fact that I lived while my cousin Kyle didn't," he said. "That's a hard pill to swallow for anyone, but especially for a kid to deal with. And it was literally through God's grace that kept our entire family central and supportive for one another."

"My desire for Noah, his family and others is to ultimately see the hope and trust that not only healed me from cancer but healed my soul, as well."

Overcoming setbacks
Robert's friend, Bjorn Anderson, runs ultramarathons in honor of his niece who has cancer. Robert said Bjorn strongly encouraged him not to be shy about the life God gave him. "Although I still don't like the attention personally, to realize this hope is more for another person rather than myself, that gives me comfort," Robert said. "When I was a kid, I knew I was pretty sick but couldn't feel the weight of what cancer meant until my cousin Kyle passed away."

Robert ran in the "Huffing for Stuffing" 10K on Thanksgiving Day and has plans to run another half marathon in the spring and a potential triathalon in June. He believes that his running is to show Noah that there is hope.

In November, Robert said that Noah had "hit a wall" in his race against cancer, which strengthened his commitment to "Run for Noah." He is dedicated to running as long as Noah is on cancer treatments.

Robert said he has a deep compassionate heart for these families and children. After Robert's treatments were completed, his mother, Marilyn Hershey, said he didn't want a celebration. "At the time, we were all still numb from losing Kyle," she said. "However, he did want a party six months later when his medi-port was removed. The port had limited him from swimming in the Bay, the creek and doing other fun farm kid stuff."

"Ultimately, kids like Noah need to play because even in the midst of something like this they teach us that life is precious and every day should not be taken for granted, but enjoyed," Robert said.


This article is The People Side feature on page 60 of the January 25, 2015 issue of Hoard's Dairyman.

Where are markets headed?
Features

Around the Kitchen Table: October 2020
Features
Related to:
features
In Features

In defense of Federal Milk Marketing Orders
By Andrea Stoltzfus

Features
He jumped at a passport experience to promote dairy