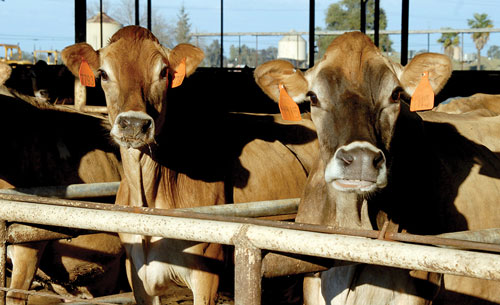 This Reader Response relates to the Hoard's Dairyman Intel item, "California asks to be a federal order."

Regarding the California FMMO piece, don't forget that the USDA is by no means obliged to give California the order language proposed by the three cooperatives. The Agricultural Marketing Agreements Act gives dairy farmers who would be regulated under a new order, and them alone, the privilege of voting for an order, up or down in its entirety, but it also instructs USDA to balance the interests of producers and consumers in constructing the terms of the order. In addition, the 1990s reform legislation strongly encourages USDA to keep orders as simple and as similar across areas of the country as possible. While this is not strictly or literally binding, USDA in a sense has to ask the question: Why, when an area wants to do something different from the norm, not Why Not? The California cooperative's proposal asks for several things that are quite different from other federal orders.

One of these differences relates to their pool quota. Another relates to the geographic construction of the order area. The Ag Act of 2014 resurrects language in the 1996 Farm Bill that pertains to certain special provisions allowed to the California dairy industry in conjunction with federal order reform during that period, specifically:

"Upon the petition and approval of California dairy producers in the manner provided in section 8c of the Agricultural Adjustment Act (7 U.S.C. 608c), reenacted with amendments by the Agricultural Marketing Agreement Act of 1937, the Secretary shall designate the State of California as a separate Federal milk marketing order. The order covering California shall have the right to reblend and distribute order receipts to recognize quota value."

This language requires the USDA to designate the entirety of California as a single and separate federal order. USDA defines the geography of its marketing orders by marketing areas. Those areas which we are accustomed to seeing as shaded areas on a map refer to places in which processors compete for the sale of Class I milk products. Thus, the first exception in the old farm bill departs from the standard way in which USDA defines the geography associated with a marketing order. If USDA were to ask the question, is California one big Class I market that goes all the way to border and stops there, they might not answer yes. No other federal order is defined by the boundaries of a state. In addition, the California cooperative petition explicitly includes one county in Nevada simply because it is the location of a DFA plant that has been associated with the California market for years. DFA is of course one of the petitioners. Thus, their petition already deviates slightly from the literal words of the old law that have been resurrected. I don't think anyone is imagining that USDA will reject the inclusion of that Nevada county from a proposed order simply because of a literal reading of the old law, but I suspect they could.

The 1996 language also sought to accommodate California's unique pool quota system, under which California farmers can pay for a piece of paper that gives them the right to a higher price than farmers who don't own that right. Of course, California has a very specific regulation defining exactly how their pool quota system works. The California petitioners believe that USDA will or must adopt that specific system in its entirety. I don't think the language of the 1996 bill requires USDA to adopt the California pool quota plan precisely as it is. It simply says a California order shall have a reblending provision to recognize quota value.

Beyond those unusually specific instructions, the rest of a California order, assuming USDA eventually proposes one, could look quite different from the cooperatives proposal. Or it could look a lot like their proposal but have some thing in it that is very different from what the cooperatives had in mind. At that point, each eligible voting farmer or his authorized cooperative would have to decide if the order language finally offered by the USDA is close enough to what they had in mind or if they would rather stick with what they have in California.

Of course, there is also nothing to prevent a California organization, including any or all of the three cooperatives, to continue to work on amendments to the state order or its underlying legislation to see if they can get it changed to achieve a similar effect.

This California cooperative's proposal remains a box that can't be judged just by its wrapping. There is a lot that still needs to happen before we know whether the USDA will recommend a federal order for California that its producers will judge to be better than what they have now or what they might yet get from their state in the meantime.
- Andrew Novakovic, New York