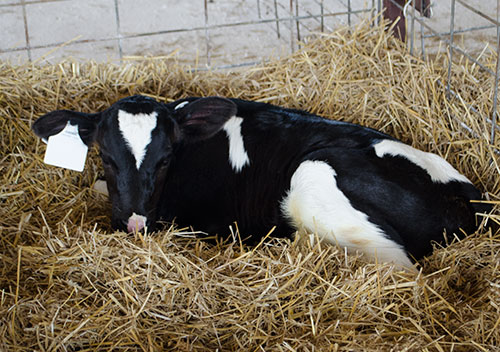 German scientists recently discovered a haplotype that limits a Holstein calf's ability to digest cholesterol. In these instances, calves eventually deplete all fat reserves, including those found around the spinal cord, and essentially die of starvation. In the U.S., the condition is being called Haplotype for Cholesterol Deficiency (HCD). It is the sixth haplotype discovered in the Holstein population.

In the weeks leading up to a calf's demise, genetically affected individuals lost their appetite and were lighter in body weight when compared to unaffacted herdmates. As this happens, in most cases calves will come down with chronic diarrhea. As health deteriorates, calves will also become inflicted with secondary diseases like pneumonia and oedemas (edema or retention of fluid). Calves with a homozygous haplotype (carrying two copies) generally die between three weeks and six months after birth.

In unearthing this sixth haplotype involving Holsteins, German scientists ruled out other disease-causing agents by repeatedly conducting pathogen tests on afflicted individuals, which turned up negative. That is when the collective group from Verden, Bonn and Munich, Germany, turned to genetics as a possible answer.

The results of that research found the genetic source for the condition.

The prominent sire Maughlin Storm appeared to have inherited a causitive mutation as his sire and grandsire do not carry HCD. Due to Storm, and offspring from ensuing generation's popularity, some individuals that have Storm appearing twice in their pedigree inherited two homozygous copies of HCD. When inheriting these copies from Storm, all calves eventually die because they cannot digest cholesterol and only survive a few months as mentioned earlier.

The popularity of the aforementioned Holstein bloodline, along with Goldwyn (who appears to be a carrier as his dam was sired by Storm), have caused the condition to proliferate since 2000. German scientists found a 8.7 percent frequency among living Holsteins carrying one copy of HCD among all genotyped individuals. That means about 0.16 percent of all Holstein calves are born homozygous for HCD and will eventually die from the condition. It should be noted that Canada has reported that some suspect homozygous females lived for two years. However, these are rare circumstances.

Scientists estimate that every time a calf dies from inheriting two copies of the HCD gene, a farmer loses a minimum of $450. That includes the calf's value, labor and medical costs.

To date, the genetic test can accurately discover 80 percent of the HCD carriers. That is because Maughlin Storm and a Holstein breed matriarch, Comestar Laurie Sheik, and her sons, Leader, Lee, Outside and Lheros, share a common ancestor - Fairlea Royal Mark. While Laurie and her descendants carry a normal DNA section from their common ancestor, Storm inherited a mutation. It's that differentiation that must be untangled to create a more definitive test for HCD.

Ongoing tests by German scientists and those from USDA's Animal Genomics and Improvement Laboratory (AGIL) and the Canadian Dairy Network are collaborating to precisely trace HCD, which is known as CDH in Germany. The current haplotype information can help Holstein breeders avoid matings of known carriers.

To learn more, visit this link.