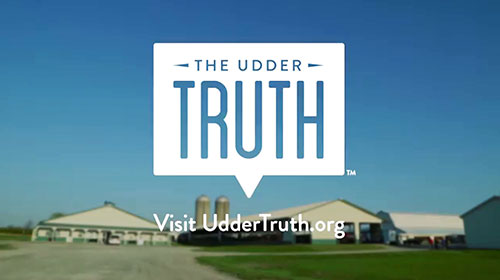 The newest promotion campaign by Dairy Management Inc. (DMI) is unlike anything milk producers have seen before. And many figure to not see this one either.

That's because "The Udder Truth," launched July 21, is aimed at millennial consumers (ages 15 to 35), and its distribution is the social media world of Facebook, Twitter and the other like-minded media outlets. Social media is an ever-changing realm composed of user-generated content and filled with hearsay and fallacy. For many millennials, it is often their primary source of information.

The goal of The Udder Truth is to "reclaim dairy's voice" and drive trust, advocacy and reconsideration of dairy among millennials by highlighting farmers' stories and debunking common dairy myths.

A second key part of the campaign is the Dairy Good Amplification Center, where milk producers and their families can share their farm videos and engage in conversation with consumers.

A third part is the Acres+Avenues video series, which pairs dairy farmers with millennials to reveal their shared values.

The Udder Truth's strategy is to drive discussion, balance conversation that has thus far been dominated by extremists, and change perceptions about dairying, dairy farmers, and dairy products.

It's an effort that DMI admits is bold, edgy and risky. But to not try is perhaps even riskier.