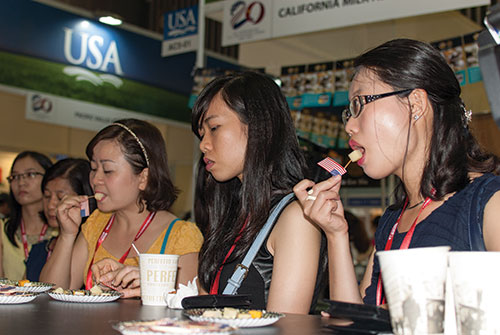 Cheese sampling was a big hit at the Vietnam Food and Hotel 2015 Trade Show.

On a U.S. Dairy Export Council (USDEC)trade mission this past April, it quickly became apparent why the budding trade partnership still holds a great deal of upside. It's a combination of expanding incomes, more people heading to cities, growing populations along with an improving infrastructure, which includes the food service sector. Then there is the matter of the region's high temperatures and humidity.

"This isn't a place for cows," said trade mission member John Brubaker, who is a lifelong dairyman hailing from Idaho. Those comments were made in direct reference to the high temperatures and humidity experienced by the group on an April morning just 700-plus miles north of the equator.

Anyone with bovine experience knows that cows begin to have issues with heat stress when temperatures go above 72°F with any degree of humidity. On that morning, it was over 90°F with humidity levels to match. That makes Vietnam and its nearby Southeast Asia neighbors - Indonesia, Malaysia, Philippines, Singapore and Thailand - long-term buyers if people want to incorporate dairy into their diets.

"Those six countries, with a combined 566 million people, purchased $1.3 billion in U.S. dairy goods last year," calculated USDEC's Alan Levitt, who noted the region had nearly twice as many people as the U.S. "That was a 39 percent gain over the past two years and more than 14 times the value shipped a decade earlier. During that time, the U.S. share of Southeast Asian dairy imports rose from 6 percent in 2003 to nearly 25 percent last year," said the USDEC vice president of communications.

For those who market dairy products, any region that is importing or buying two-thirds of its dairy products should grab their attention. "If you look at what is going on in this region, it is very exciting," said Tony Emms who heads up USDEC's Southeast Asia office.

Vietnam received special focus
The nation engulfed in war a generation ago looks quite different these days. With a land mass equivalent to Wisconsin and Illinois, Vietnam is home to 92 million people that average 29 years of age. For this generation, the war is a distant history lesson and the communist rule of law looks more like "capitalist-communism." The roadsides in Ho Chi Minh City (formerly known as Saigon) are lined with businesses run by for-profit entrepreneurs. As incomes continue to rise (currently $150 to $160 per month on a U.S. dollar), young parents want more for their children. That includes a protein-based diet.

The partnership to bring more dairy to Vietnamese consumers involves Vinamilk. The company currently ranks fourth on Forbes magazine's Vietnam list of the top 500 companies. The innovative Vinamilk brand is the largest player in Vietnam's dairy product category. It held a 48.7 percent market share last year. And since 2000, it netted a collective 23 percent annual growth rate in sales. This past year alone, the company purchased over $100 million of U.S. dairy products. A good portion of that came in the form of milk powders.

The world's most modern fluid plant
After a tour of Vinamilk's new facility, located in the Binh Duong province of Vietnam, those on the trade mission agreed that plant would be the first nominee for modern plant design and a shining example of efficiency. Part of that efficiency is ensuring milk quality in the hot and humid conditions that prevail in the Southeast Asian nation. All of this was witnessed firsthand by Brubaker; California dairy woman Renae DeJager; Washington dairy woman Kima Simonson; Pennsylvania dairyman Harold Shaulis; USDEC staff; USDA staff; and a group of dairy journalists.

Constructed in partnership with Tetra Pak, the Vinamilk facility manufactures milk to the same specifications that the U.S. Food and Drug Administration and Department of Agriculture would place on American-based dairy processors. That voluntary step by Vinamilk is a growing trend as the region steps up food safety standards.

At the plant's grand opening in April 2013, it was on pace to produce 105 million gallons of milk annually. With a recent expansion, that number has doubled to 210 million gallons. The entire manufacturing process is completed with less than 200 employees on a campus covering 50 acres.

Adding to the modern plant design are robots. A central computer system, with eight computers and four technicians, controls every step along the way. Robotics move sterilized paper and plastic into filling machines. At the time of our visit, about 25 cartons of milk were moving through a single line every 10 seconds.

Robotically driven pallet machines then deliver electronically coded products to the intelligent warehouse, a first for all of Vietnam. The warehouse, situated on 15 acres, has 20 dispatching and receiving lanes. The massive storage facility contains 17 floors of shelving holding the ultra-high temperature processed milk (UHT) that can be stored at room temperature.

While many point to China as the world's largest dairy buyer, importing 74 pounds of dairy products for every citizen, other countries in Southeast Asia also have growing dairy appetites, consuming 42 pounds of dairy per person annually. This developing phenomenon was witnessed at the Vietnam Food and Hotel 2015 Trade Show where the U.S. trade section saw heavy foot traffic. And a great deal of that interest was focused on dairy products, particularly cheese as the region's consumers begin developing a taste for it.

It was only 20 years ago that the Vietnamese and U.S. governments re-engaged in communication channels by restoring diplomatic relations. From that moment, Vietnam moved from America's 91st ranked agricultural trading partner to 33rd in 2007. That happened to be the year Vietnam joined the World Trade Organization (WTO) and agreed to adhere to international trading rules. Last year, Vietnam climbed to America's 12th ranked agricultural buyer by purchasing $2.1 billion in goods. Topping that list was dairy.

While open air markets still dominate the marketplace, Southeast Asia is quickly transforming into a modern storefront. As that happens, dairy product sales will have a bright future in the region.