By Barry Bradford And   Caroline Ylioja
The authors are an associate professor of dairy nutrition and a graduate student, respectively, at Kansas State University. 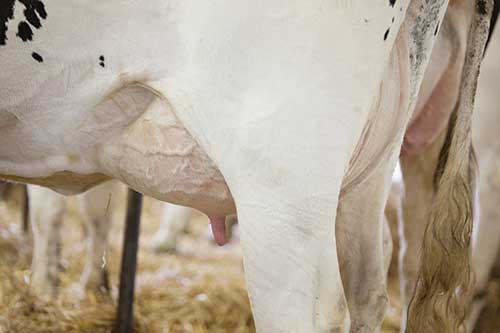 Inflammation has a bad reputation, but at times it is actually helping our cows recover from stress, pathogens, injury or toxins.
When was the last time inflammation was on your mind? If you're like most people, maybe it was a week ago when you hit your thumb with a hammer, or when the last storm front came through and your knee ached all day.

Although inflammation is certainly involved in injuries and chronic pain, what we are learning about inflammatory signals today is that they play a much broader role in regulating body functions than was recognized previously. As dairy producers, a more nuanced understanding of the many roles of inflammation can lead us to make wiser decisions about anti-inflammatory treatments and even nutrition of our cows.

A source of healing
Inflammation is a core component of the body's immune response to stimuli which can include stress, pathogens, injury or toxins. It is involved in tissue protection, repair and maintenance, with the purpose of eliminating the cause of stress, clearing any damaged tissue and triggering tissue repair as necessary.

Calving and the beginning of lactation can certainly be considered a stressor. It requires a huge adjustment on the part of the dam in a short window of time as she shifts from gestation to milk production. Despite our typical negative view of inflammation, local inflammatory processes are crucial at this time, especially for tissue remodeling and immune system responsiveness.

One example of a beneficial role for inflammation is in the process of calving and postpartum uterine regression. Multiple studies have now shown that the use of nonsteroidal anti-inflammatory drugs (NSAIDs) shortly prior to calving can slow down the birthing process and promote retained placentas. This is most likely because the muscle contractions and tissue remodeling required during this process are stimulated by inflammation.

Likewise, although inflammation in the mammary gland is generally thought of in relation to mastitis, it also plays an essential role in normal development and function of the udder. One mouse model demonstrated that a reduction in an inflammatory signaling pathway in the mammary gland disrupted mammary development to such an extent that all pups from this line of mice died of starvation because the dams didn't produce any milk. We believe it is likely that inflammation plays a similar role at some point during bovine mammary development as well.
The udder also employs immune defense strategies at the end of lactation. Dry-off is a time of higher susceptibility for bacterial colonization. The regular removal of milk abruptly stops, and any bacteria present in the mammary gland would likely take up residence and multiply, causing trouble for the cow.

At this time, a local inflammatory response works to prevent bacterial infection as well as to dismantle the milk production machinery until it's needed for the next lactation. Several studies in different species have shown that anti-inflammatory treatment at this time actually delays the process of mammary involution.

Too much of a good thing
All of these examples of adaptive roles of inflammatory signals don't negate the fact that excessive inflammation (the hammered thumb or the mastitic udder) can be problematic. In fact, some recent studies have demonstrated that treating mastitis with an NSAID on top of antibiotic treatment can improve the odds of a cow remaining in the herd in the months following the illness. One key question in dairy physiology is - particularly during the transition to lactation - what does a healthy degree of inflammation look like?

We and others around the world have been studying responses to short-term administration of NSAIDs in the days after calving. What we have seen has surprised us. In multiple studies, apparently healthy cows treated with NSAIDs during the first week of lactation have gone on to produce 5 to 10 percent more at peak milk, and in the few studies that have followed cows for long enough, the response was sustained over the entire lactation.

We do not yet have a good explanation for these responses, but given the critical role of inflammatory signals in the mammary gland, we are digging into mammary mechanisms now. Perhaps the inflammation carried over from the process of calving impairs mammary cell function, and blocking these responses during that critical window of time pays long-term dividends.
Use nutrients to tame
Using NSAIDs to treat postcalving inflammation is a relatively new topic, and there are no drugs with explicit approval for this in the U.S. However, some nutrients can also influence inflammatory tone. In particular, Omega-3 fatty acids (found most abundantly in algae and fish) are known to limit inflammatory signaling, while Omega-6 fatty acids (found in corn and soy oil, for example) can enhance it. Specialty feeds are available that provide these nutrients at levels that can alter the degree of inflammation in cows, although there is only limited information currently available about the health and productivity responses to Omega-3 and -6 feeding strategies.

We have a lot more to learn about the pros and cons of inflammation. The next time you pop an aspirin or a fish oil pill in your mouth to help control your knee ache, think about all of the gears turning away in each of your organs and the myriad effects that little pill might be having. When it comes to dairy cows, as we discover more about the impact of inflammatory signals on animal function, the many potential opportunities and risks of anti-inflammatory treatments will need to be evaluated.

Features
What have we learned from this crisis? 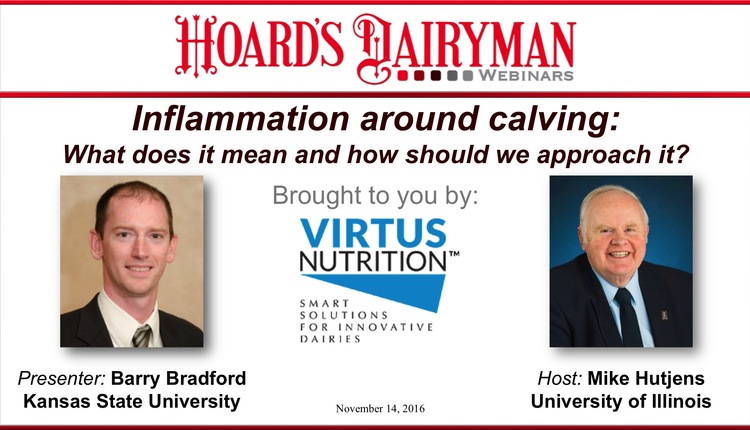 2016 Webinar Archives
Inflammation around calving: What does it mean and how should we approach it?

Crops and Forages
Is alfalfa hay worth the price?
comments powered by Disqus