Building on the good financials from just one year earlier, Dairy Farmers of America (DFA) posted its second consecutive year of record income. During the past fiscal year, the cooperative earned $132 million in net income, rising above the $84 million total from 2015. As a result, the nation’s largest dairy co-op distributed $42 million in cash via patronage dividends to its members last year.

“It’s not how big we are, but how much value we bring to our co-op members,” the always candid Rick Smith told those attending the 19th annual meeting of the Kansas City, Mo., based cooperative. Smith, who gave his 11th address as CEO of the cooperative, noted that DFA’s staff didn’t work any harder in 2015 and 2016 compared to prior years, but initiatives started years ago made greater returns on investment.

These days, DFA has 42 wholly owned manufacturing facilities. That total climbs to 75 when factoring in alliances and joint ventures. It’s that latter category that continues to grow. The most recent joint ventures include:

DFA, WNY Enterprises, and Arla Foods constructing and operating a cheese plant in western New York that will be called Craigs Station Cheese.

DFA and Select Milk Producers partnering to own and operate the Portales, N.M., dairy plant.

“Our commercial operations have an incredible customer list. We are going to grow but in a disciplined way,” commented Smith of these and other projects now in the works. “I expect next year we will be telling you about our office in Singapore.”

Smith added that there are 3 billion potential customers living in the Asian region when combining China, India, and the other nations. That represents over one-third of the world’s population.

“We need to get closer to our customers,” he explained.

“Trade is a growing business for U.S. dairy. We must have a seat at the trade table to protect and grow dairy’s interests,” said Randy Mooney, chairman of the DFA board.

As for the joint ventures, Mooney noted that the retail climate continues to evolve.

“Today, co-ops are being squeezed due to consolidation between processors and retailers. We need to work together to create more value across the entire dairy food chain,” Mooney went on to explain, with the “we” meaning all dairy farmers no matter what cooperative affiliation. 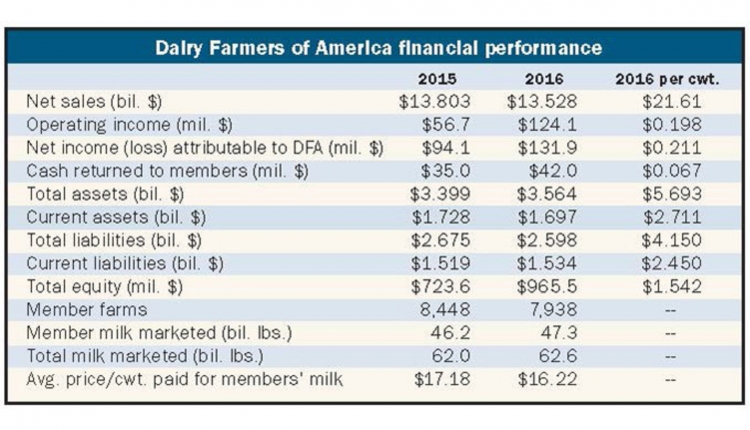 To fund the joint ventures and other facility upgrades, the co-op that markets 29 percent of the nation’s milk acquired credit on the financial market. Thanks to a strong credit rating, DFA gained access to $150 million in preferred equity securities. On top of that, it garnered $250 million of additional senior notes.

“The co-op’s credit rating is stronger than that of Saudi Arabia if you look at financial reports,” noted Smith. “We looked for $250 million in credit, and we were offered $900 million.”

While finances have improved greatly for the 19-year-old co-op, board chairman Mooney reminded the audience that members matter. “The true strength of any cooperative is the engagement of its members.” To that end, “DFA is a cooperative positioned to lead, and not afraid to lead,” he said with an eye toward the future.

The co-op definitely captures the full, wide breadth of the industry with members in 49 states. “We have all kinds of dairy farms, and we cover the entire U.S.,” said Smith in making his 31st presentation as a dairy co-op CEO, 20 of which were with another cooperative.

At the Tuesday night awards banquet, seven farms, one each from the DFA’s seven area councils, were honored with the “Member of Distinction” designation. To fully transition the corporate board size back to 49 seats after the Dairylea-DFA merger, 10 directors retired from the board who previously contributed 300 years of combined board experience. In addition, $53,000 in scholarships were awarded to 45 high school, college, and graduate students.

From grass to glass
Features
Related to:
features
In Features