We can solve lameness around the globe 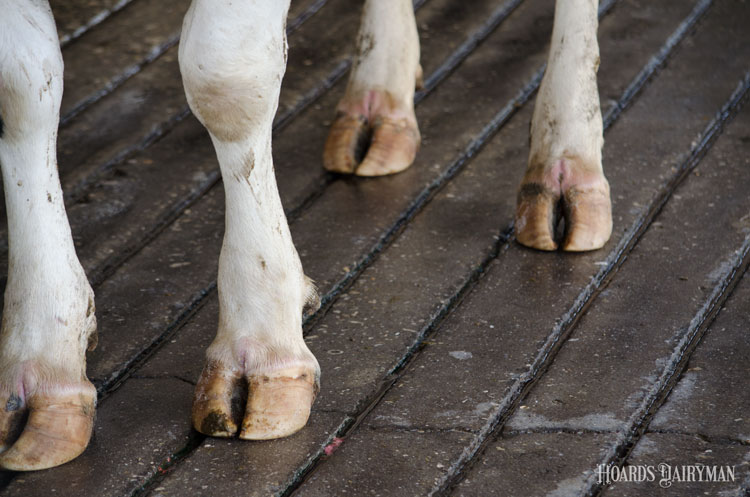 Foot lesions are a big deal when it comes to cow foot health. “Foot lesions impact a cow for a lifetime,” stated the University of Wisconsin School of Veterinary Medicine professor who has extensively studied the impacts of foot health.

While three hoof lesions are responsible for nearly all the global lameness from a medical standpoint, human error also plays a role.

“Of the lameness problem herds, almost 100 percent have a hoof trimming issue . . . caused by poor hoof trimming technique,” noted the veterinarian. “At the same time, good hoof trimming restores a more upright claw angle and balances weight between the inner and outer claw,” he went on to say.

When it comes to the big three hoof lesions, Cook explained that poor flooring has a direct impact on white line disease. That poor flooring includes slippery concrete, concrete with poorly placed grooves, and slatted floors.

“However, poor flooring alone does not cause white line lesions,” said Cook. “Poor cow handling technique plays a role, too. Sole ulcers on the other hand can be solved by attention to the cow’s time budget — ensuring that she is able to rest for 12 hours per day. Minimizing time out of the pen milking, providing a comfortable, deep-bedded stall and paying attention to heat abatement will go a long way to reducing the risk for this condition,” he said.

Meanwhile, digital dermatitis, to some degree, remains a riddle.

“Digital dermatitis is a disease of modern freestall facilities,” explained Cook, noting that the moist hooves combined with certain bacteria make cows more susceptible. The problem is those bacteria can be found everywhere that cows are located.

“The ideal footbath optimizes foot immersions,” said Cook. “Two to three immersions per foot is ideal so baths need to be 10 to 12 feet long.” He went on to say that farms should run footbaths four times a week . . . and then increase or decrease frequency based on whether effective control is achieved.

“Use the footbath as long as it’s effective,” Cook went on to say. “That’s usually 150 to 300 cows. Then change out the solution.”