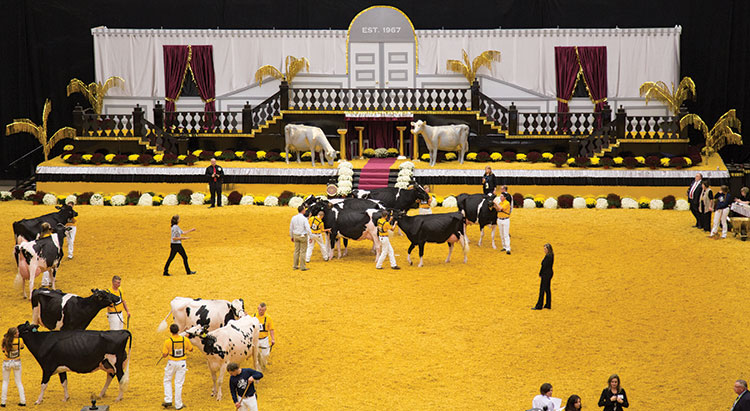 Since 1988, each World Dairy Expo has had a unique theme. That theme is reflected in just about every aspect of the show, from the Purple Cow Gift Shop to media materials to the ever popular showring.
No two World Dairy Expos are alike. Each year brings unique displays, first-time trade show exhibitors, and a new Supreme Champion cow. And for nearly three decades, each show has also had its own theme.

As memories of past World Dairy Expos begin to fade, the themes often linger in people’s minds. Of course, everyone has their own favorites. Last summer, Hoard’s Dairyman mailed a ballot to 50 long-time World Dairy Expo attendees. We asked them rank their top five themes. The design from 2004, Breeds in Bloom, topped the charts. The Greek theme from 1993 was second.

When people think of the World Dairy Expo theme, they often remember the showring. The theme, however, goes well beyond the Coliseum and encompasses just about every aspect of the show.

Where it all begins

The theme for World Dairy Expo doesn’t simply come together overnight. Selection begins about a year and a half in advance.

Kristin Olson, World Dairy Expo’s media relations manager, explained that the theme selection process involves all staff. The first step is a brainstorming session, where everyone throws out ideas, taglines, and concepts. They discuss trending topics and how they relate to the dairy industry. Olson noted that they must keep in mind that this is a global show and, therefore, the theme must have global appeal.

From there, the team narrows the list down to five ideas or less. A week goes by so everyone can marinate on those themes, and then all staff members vote anonymously.

With a chosen theme in hand, World Dairy Expo takes that idea to their designer, who will work up three different visual concepts. World Dairy Expo staff plays around with those concepts to finalize the theme.

Staff members explore the taglines and different looks. Some staffers have design experience, which is a plus. Their background knowledge in dairy is also a tremendous advantage as they finalize the theme.

The first piece of art that is created is the poster that is distributed to media and exhibitors prior to the show. The staff builds off that poster to design the clothing for the year, other commemorative items, the annual pin, and the cattle show awards. “The idea really blossoms from there,” she said.

The theme is incorporated into all communication pieces, including the premium book for cattle exhibitors and the letterhead and envelopes that go to sponsors and exhibitors. All media materials for the year also reflect the theme.

Some years these details all come together easily, other years it is a bit more difficult. For example, Olson explained that in 2017, they knew they wanted a nautical, worldly theme. The plan for 2018, on the other hand, required them to dig a little deeper and get creative.

“It’s definitely a collaborative, team approach,” she said. “Two heads or more are better than one.”

The staff enjoys the opportunity. “It’s a way for staff members to hone into their creative skills, and it is fun to see the theme become real at the show,” Olson said. “It’s a challenge, but it’s a fun one.”

All around the ring

Tom McKittrick was at the World Dairy Expo helm as general manager the first time the show had a theme. It was 1988, and that year the World Ayrshire Conference was held in conjunction with World Dairy Expo. Fittingly, they went with a Scottish theme to honor the origin of the Ayrshire breed.

McKittrick said that a few of the other early themes followed along those lines, commemorating the countries where certain breeds originated. After that, they started to expand into other areas.

Selecting the theme was a fun part of the event, according to McKittrick. He felt the staff always came up with plenty of ideas, although some were easier to work with than others.

He said, “Where you started the brainstorming process was often different from where you ended up.” For instance, one year the theme all began with the idea of clocks. It ended up with the tagline “Time well spent.” “That was one of my favorites,” he said.

Some years the showring tied in really well; other years, the print materials were fun. “I loved being creative,” he said. “The process was always fun to do with the staff.”

McKittrick left World Dairy Expo in 2007 after nearly two decades as general manager. His involvement with the show didn’t end there, though. Three years ago, McKittrick began working with World Dairy Expo again to design the showring.

Once they send him the theme, McKittrick mocks up three general designs for the showring. The staff picks the one they like best, and from there he finalizes the details, coordinates the shavings and mums, and orders supplies. As the event approaches, he works with Badger Dairy Club members to get the ring decorations built.

“I love it. It really is fun,” he said. “The showring was always one of my favorite parts.”

That passion shows in his work. Olson said, “We let him know our ideas, but he runs with it and really brings the theme to life in the showring.”

The theme has become a World Dairy Expo tradition, according to Olson. “People look forward to it each year, whether they are a cattle exhibitor or not,” she said.

McKittrick echoed similar sentiments. “A lot of business takes place at World Dairy Expo, but it is also a reunion of the dairy industry,” he said. “The theme is fun. It’s new and different, and it adds interest each year.”