Step down, not backward, at weaning 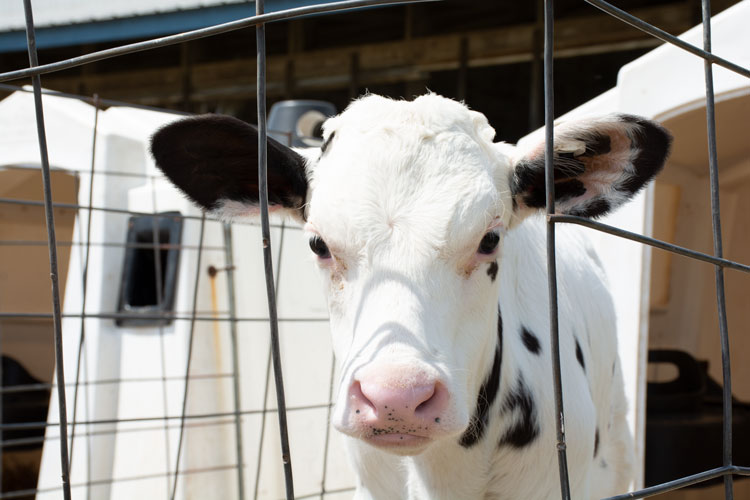 A calf faces many challenges at weaning, including the transition to a solid diet and often commingling with other calves. On top of this, a calf is still developing its immune system, which is not fully functional until 5 to 8 months of age.

Whitney Knauer, with the University of Minnesota College of Veterinary Medicine, shared some strategies to make weaning a smoother transition during her presentation at the Minnesota Dairy Health Conference held in St. Paul, Minn.

The goal, she said, is to get calves through weaning in good health with average daily gains to support growth so they are two times their birth weight. We also want them to have a functional rumen ready for grain and eventually forage consumption.

Weaning takes place when milk is removed from the diet. According to data from the National Animal Health Monitoring System (NAHMS), average age of weaning has not changed much but is trending upward. In 1991, average age at weaning was 7.9 weeks; in 2014, it was up to 9 weeks. “Producers are seeing the benefit of keeping calves on milk a little longer and giving them more time to adjust to solid feed,” Knauer said.

Removing milk from the diet can be done abruptly or over time. With the introduction of automatic calf feeders, “step down” weaning has become more popular, but this can be done with conventional feeding systems, too. Research has shown that calves benefit from a more gradual reduction in the amount of milk fed.

Knauer shared one study that included four groups of calves weaned at 42 days. The groups were weaned abruptly, or weaned with a 4-day, 10-day, or 22-day step-down protocol. The results showed that calves weaned over 10 days had the best overall results in terms of weight gain during and immediately after weaning.

In another study, calves were weaned at 48 days either abruptly or after receiving half as much milk for 12 days prior to weaning. Knauer pointed out that the group on the step-down protocol had improved starter intake and growth immediately after weaning.

Using these results, Knauer recommended a 10- to 14-day step-down period, which allows calves time to adjust to starter consumption and reduces the postweaning growth slump.

Her best management practices for step-down weaning are as follows:

1. Reduce milk allowance by 50 percent.
2. Feed milk once per day, preferably in evening.
3. Provide fresh starter and water at the opposite feeding to encourage consumption.
4. Completely wean from milk 10 to 14 days later.

A quick word on the coronavirus and dairy
Hoard's Dairyman Intel

Where is Farm Bureau on supply management?
Hoard's Dairyman Intel

A quick word on the coronavirus and dairy