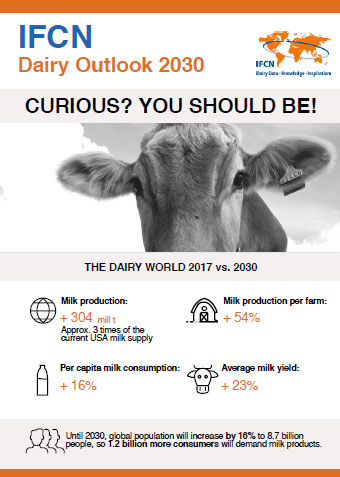 The world’s milk production could climb by 35 percent, predicted researchers associated with the IFCN Dairy Research Centre. South Asia, anchored by India and Pakistan, could lead the way, expanding milk flow by 64 percent by 2030.

Milk production per farm could climb by 54 percent, while milk yields per cow would grow 23 percent globally.

As for herd size, Oceania (New Zealand and Australia) would set the pace, growing herd size to 414 head of milk cows, up 14 percent through 2030. North America, anchored by the U.S., would climb 82 percent to reach 340 cows per herd. As of last year, U.S. herd size averaged 234 cows.

Rounding out the major export regions is Western Europe where herd sizes could expand by 65 percent to reach 98 cows per farm.

After that, the next largest dairy region, Latin America, could see herd size jump by 22 percent to reach 16 cows per farm.

More consumers, more demand
Through 2030, the world’s population could grow 16 percent to reach 8.7 billion people. With a current global population of 7.5 billion souls, there would be 1.2 billion new consumers on Earth.

As a point of reference, consumption of dairy products stood at 646 pounds for every U.S. citizen in 2016.

More dairy trade
From 2004 to 2017, dairy trade expanded by 53 percent, surmised the IFCN Dairy Research Centre think tank after polling some 80 researchers from 40 countries at their recent annual gathering. Through 2030, the net dairy trade is expected to climb by 73 percent up to 95 million metric tons of energy-corrected milk. On a pounds basis, that’s 209.5 billion pounds or roughly the total U.S. milk flow in 2017.

To learn more, contact the IFCN Dairy Research Network via email at info@ifcndairy.org.