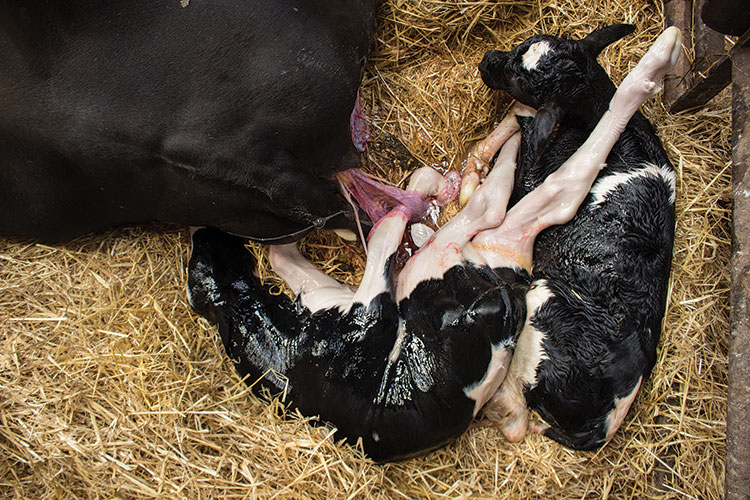 Dairy cattle, like other cattle breeds, are a monotocous species. In other words, they usually ovulate only one egg per heat cycle. Other farm animals, such as pigs, sheep, and goats, are polytococus species, ovulating multiple eggs per cycle.

The latter species were created to ovulate multiple eggs and carry multiple offspring at once. Although dairy cows can carry more than one calf at a time, it is not usually in their best interest because of the many problems that often follow such as a difficult birth, a retained placenta, uterine disease, and reduced postcalving lactation and reproductive performance.

Strange things, however, happen in biology. For example, a 4-year-old Holstein cow in Orland, Calif., gave birth to quadruplets in 2011. All four calves were heifers and were born alive, healthy, and full-term without assistance. This was the cow’s third calving . . . the first two resulted in single-born calves. The cow ovulated spontaneously without any hormonal intervention and was artificially inseminated with non-sexed semen after a natural heat.

The cow apparently ovulated three eggs from its ovaries, which were fertilized, one of which then split, producing two genetically identical calves out of the four calves. Hair sample DNA taken from the cow and all four calves confirmed mother and calves were related.

What are the odds of such an event?

Twinning in dairy cattle occurs 4 to 5 percent of the time, with the greatest frequency occurring in Holsteins. Twinning is quite rare for the first calving, but its occurrence climbs with successive calvings and is more often observed in higher milk-producing cows.

Most twins are dizygous (nonidentical or fraternal). Dizygous twins can be of the same gender or one of each.

Some cow families produce twins at much greater frequencies than normal. Genetic selection of cattle based on twin births and later combined with ovulation rate elevated the twinning rate from 4 to 31 percent in beef cattle breeds. After further selection for ovulation rate and twins, more than 35 percent of all births in this experimental herd resulted in twins.

Nearly all twins that occur in dairy cattle are the result of two follicles ovulating and producing two eggs. Because multiple ovulation occurs approximately 15 percent of the time in dairy cows, the occurrence of dizygous twins is most common. The offspring in this case (dizygous twins) are full siblings because they both share the same dam and sire.

A heifer born co-twin to a bull is known as a freemartin. Freemartin heifers result from 92 percent of heterosexual twin births. It is not only heifer calves born co-twin to a bull that can be infertile. Any heifer that was exposed to a twin male in utero for approximately 40 to 50 days after conception can become a freemartin, even though the heifer is born as a single calf. The wisest remedy is to cull freemartin heifers because more than 90 percent are not anatomically normal and rarely conceive.

Freemartinism has been reported to occur in cervids (red deer, wapiti, and reindeer), goats, and pigs, but not in horses. The condition occurs when blood is exchanged prenatally between two adjacent placentas fused together. It is also known that the bull born co-twin to a heifer may have less than normal fertility as well.

Other rare congenital anomalies called intersex (the animal has male or female gonads, but has the opposite gender’s external reproductive anatomical parts) or chimeras (fusion or cellular mixture of male and female embryos) occur, resulting in infertility. For example, the intersex goat acts like a female at birth but later, usually at puberty, starts to butt like a buck and become aggressive.

A majority of intersex goats show pronounced male libido in the presence of a doe. Depending on the type of gonad that forms, goats can have either male or female gonads (pseudo or false hermaphrodite), or both (true hermaphrodite). Intersex individuals have rarely been observed in most animals (goats, pigs, cattle, camelids, and horses) and are infertile.

When cows are diagnosed with twins, they require a greater-than-normal plane of nutrition during the last three months of gestation (all of the normal dry period) because of the extra nutrients, particularly protein, required by the second fetus and placenta. Of greater consequence is the shorter gestation of six to 10 days, and if not managed correctly, twinning cows will spend inadequate time in the close-up dry cow pen. Earlier dry-off and earlier movement to the close-up pen are recommended.

These cows also may require assistance at calving time. Precalving culling is an option if these cows have other issues that might warrant culling. Identifying cows carrying twins at either the first (30 to 40 days) and confirmation (60 to 80 days) pregnancy diagnosis allows for targeting appropriate future management. Happy A.I. breeding!