These buildings met their match

An unprecedented blizzard brought heavy snow that collapsed buildings on several Midwestern farms; a lack of engineering seems to be the main culprit. 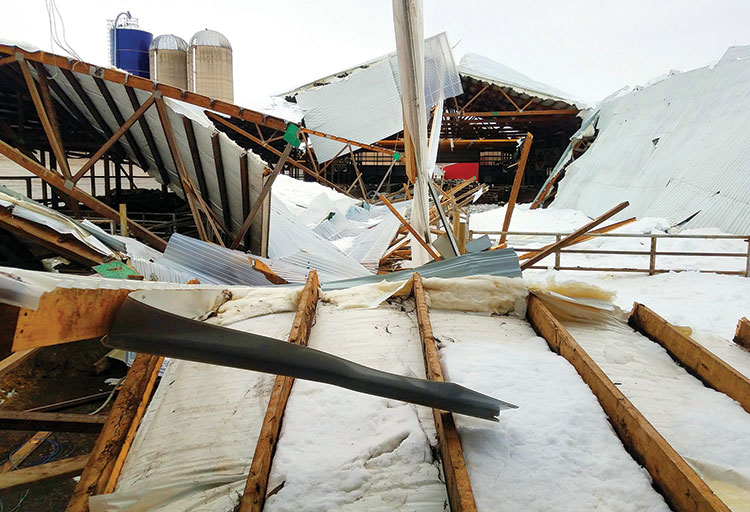 Buildings that are not structurally engineered are at risk for failure when extreme weather conditions strike. The roof on this freestall barn collapsed during the blizzard that hit northeastern Wisconsin in April of 2018.
Most people living in the northern United States or Canada have come to expect long, cold winters. However, Mother Nature really threw a curveball last April when a major snowstorm swung though the Dakotas, Minnesota, Iowa, and Wisconsin, dumping more than 2 feet of snow in some places.

One area hit particularly hard was northeastern Wisconsin, where numerous dairy farms reported roof collapses from the weight of the heavy, wet snow. Similar damage was not seen in commercial or residential buildings. Why was that the case?

For David Bohnhoff, a registered professional engineer and an emeritus professor of Biological Systems Engineering at the University of Wisconsin–Madison, the answer is clear. “Almost without exception, the agricultural buildings that failed in Wisconsin on April 14 and 15, 2018, were not structurally engineered,” he stated during his presentation at a UW-Extension Farm Management Update for Ag Professionals meeting. “A building that is not structurally engineered is going to have numerous, inherent weaknesses.”

“Structural engineering is basically an interactive, three-step process that begins once a framing plan has been roughed out,” explained Bohnhoff.

“The magnitude of various loads and load combinations to which the building could be subjected are first calculated. Detailed finite element analyses are then performed to determine forces induced in framing components, component connections, and cladding by each load and load combination,” he said. “Finally, all components, component connections, and cladding are checked to make sure they can withstand the induced forces and that their movement under load is not excessive.”

If one or more building elements are undersized or significantly oversized, adjustments are made and the structural system is reanalyzed. “When a building is not structurally engineered, these analyses and checks are not performed, and no one has a clue as to what load types and levels will result in a building failure,” he said.

He stressed, “It’s extremely important to understand that a detailed set of drawings with material specifications and an accompanying truss design means absolutely nothing unless accompanied by a comprehensive set of stamped/sealed structural calculations.”

4. There is a perceived higher cost of structural engineering.

Exempt from the law

When it comes to state law, Bohnhoff talked about Wisconsin’s two building codes: the Uniform Dwelling Code, which is the state’s code for residential buildings, and the Wisconsin Commercial Building Code.

Some buildings are exempt from provisions of the Wisconsin Commercial Building Code, and structures on farm premises used exclusively for farming purposes fall into that category.

Wisconsin did not write its own commercial building code; rather, the state adopted a model code called the International Building Code (IBC). Bohnhoff explained that the IBC covers agricultural buildings and has been adopted in every state. However, when Wisconsin adopted the IBC making it state law, it made a few adjustments called “Wisconsinisms.” One of those Wisconsinisms is the exemption of farm buildings from the code.

The exemption of farm buildings from the governing commercial building code is not unique to Wisconsin. It is also historic in nature. Building codes are largely fire codes and were initially enacted to limit disasters that would wipe out an entire town or section of a community. Because barns were isolated in rural areas, were relatively small structures when compared to industrial buildings of the time, and seldom placed human life in danger when they did catch fire, they were granted an exemption from the code.

Today’s barns are considerably larger and house more workers for longer time periods. In most of these larger buildings, structural performance far outweighs fire-related concerns, and for this reason Bohnhoff said the code exemption for farm buildings — at least larger ones — should be questioned.

“When buildings get big, structural engineering becomes much more critical,” Bohnhoff said, in regard to large dairy barns. He pointed out that larger buildings are bigger targets for extreme weather events and explained that wind and snow loads can be highly variant. Drifting snow is a great example of that.

A common characteristic of many nonengineered farm buildings is that they feature trusses designed and installed like residential trusses. This generally means they were created without any consideration of the rest of the building system. “You can get by with this on small buildings but not large ones,” Bohnhoff said. “Trusses designed and installed like residential trusses commonly feature web bracing that is only applicable to trusses spaced less than 4 foot on center. When used in a post frame building, this bracing adds to the cost of the building, raises the probability of failure, and increases the risk of progressive collapse.

Features
Are autofeeders in your herd’s future?