U.S. looks to lift both quantity and quality

As the U.S. Dairy Export Council implements its “Next 5 percent” strategy to grow exports from 15 to 20 percent of production, value-added ingredients and cheese will be a key focus 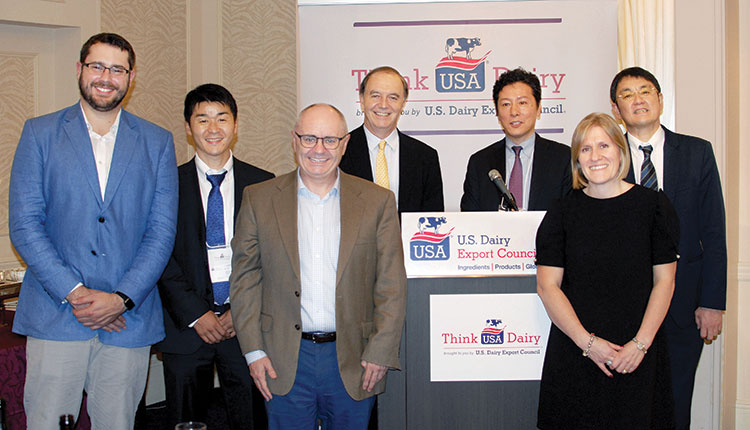 The “Next 5 Percent” strategy includes more boots on the ground for USDEC. Shown at the Tokyo-based trade mission were (L to R): Luke Waring, Itsuki Tomiyama, Ross Christieson, Jeff McNeill, Hisao Fukuda, Angélique Hollister, and Hiroshi Furuyama. Waring, Christieson, and Hollister are based out of the U.S., with McNeill, Fukuda, Furuyama, and Tomiyama based out of USDEC’s Japan locations.
There are a number of significant economic issues that linger like storm clouds over the collective U.S. dairy sector. Four years of subpar milk prices have taken their toll on dairy farm equity and, more concerning, have eaten away at the very psyche of dairy farm families.

Then there’s the matter of a constantly growing milk supply and a domestic consumer base that can only consume so much of that growth. Make no mistake, the two matters have a direct correlation.

During that same window, cow numbers have fluctuated roughly 200,000 head in a dairy herd that totals just over 9 million milk cows. All this new milk and the resulting dairy products from the same number of cows must find a home.

Some good news is that U.S. consumers are eating more dairy.

USDA estimates that American consumers now eat 78 pounds more of dairy products than just 20 years ago when measured on a milk-equivalent basis, milk-fat basis. Even though dairy product consumption has climbed from 565 to 643 pounds per person, that’s not nearly enough to absorb all the new milk being shipped off U.S. dairy farms. Given this situation, exports had to become part of the long-term strategy.

When the American dairy industry entered its modern-day growth cycle, the U.S. Dairy Export Council (USDEC) was just in its infancy. At its inception in 1995, U.S. processors exported between 2 to 3 percent of the nation’s production, which was mostly aided by government support.

With the aid of international marketing know-how from USDEC, U.S. dairy cooperatives and processors reached out to world markets and grew dairy exports to the equivalent of 15 percent of all U.S. milk production. That means that all U.S. dairy cows produce milk for international customers one day each week.

Most of this USDEC activity has been funded by U.S. dairy farmers via money from the national dairy checkoff, along with membership fees from dairy processors. However, to keep pace with growing U.S. milk supplies, even more dairy product export sales are required.

That’s why USDEC CEO Tom Vilsack and his team developed the “Next 5 percent” strategy. If USDEC reaches this lofty but achievable goal by 2022, the U.S. dairy sector will be exporting one in five tanker trucks . . . 20 percent of its production. This would take place even though U.S. dairy farmers continue to ship more and more milk.

The “Next 5 percent” export strategy is based on more partnerships, more people, and greater investment in programs. It takes all three components because people still buy from people, and relationships matter . . . especially when it comes to growing international markets.

Those extra boots on the ground also are a must because major dairy export competitors from Oceania and Europe have deployed far more human resources throughout the world. To fund this new initiative, USDEC turned to state and regional dairy promotion groups for additional funding. Those dairy promotion groups receive 10 cents or two-thirds of the overall 15-cent dairy checkoff. Under former USDA Secretary Vilsack’s leadership, many state and regional groups stepped up to meet the challenge.

“Cheese is becoming far more important to the U.S. as an export product,” said Christieson. “There’s a big, growing cheese market around the world. The returns on cheese are higher than selling a lot of commodity ingredients,” said the cheese expert during a USDEC trade mission to Japan.

While all dairy products are the ultimate priority, those products don’t just sell themselves.

“We’re investing more money in exporting as an industry. We are building plants, making products that are more export-focused, and improving our supply chain,” said Christieson. “We are also spending more time on customer service,” he said, noting these are the things that major exporters of any product must do in order to serve international markets.

“In the past, we were an industry that at times disposed of commodity products on the world market,” he said. “We did that as well as we could without investing much money in the activity.

“When we reach our 20 percent export goal, the U.S. dairy sector will be more valued on the international market and provide more value to customers,” said the lifelong marketing specialist.

There will be ups and downs

“We have to control what we can,” Christieson went on to say.

“The Next 5 percent strategy has given us (USDEC) a more long-term, strategic focus,” he said. “As an organization, because of the way we were funded, we ran an annual cycle in our business and that wasn’t the most efficient.”

These future cheese sales will include bulk commodity cheese, which the U.S. has a solid base. The goal will also include more focus on specialty cheese. With this new focus, the Next 5 percent goal should be achievable.

“We have been good at exporting cheese. Bulk commodity cheese has been the low-hanging fruit,” noted Christieson.

In 2014, the U.S. had become the largest single-nation cheese exporter. However, the Russian ban on exports from the U.S. and Europe and the European Union eliminating its supply controls changed the market. With renewed focus, USDEC should help the U.S. dairy industry regain the title of the world’s largest cheese exporter.