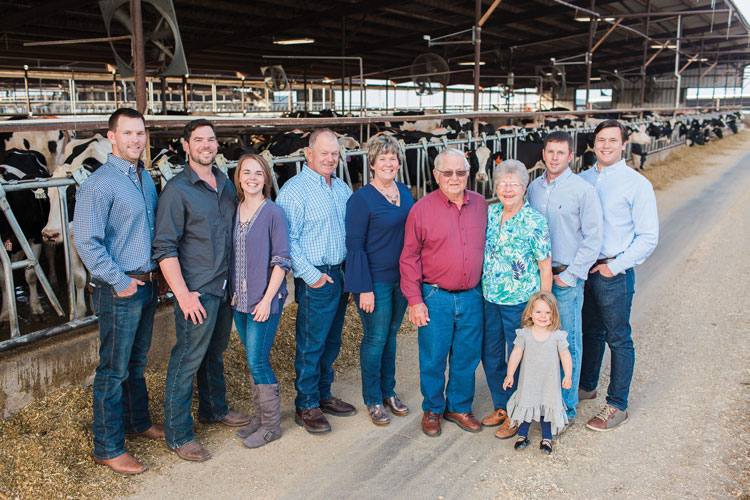 For the Ohlde family, the farm transition process included four grandsons buying their grandparents’ share in the farm. Justin Ohlde shared that keeping everyone whole was the most challenging part.

Farm transitions rarely go exactly as planned. Much like anything in life, there are both joys and hard moments to estate and succession planning.

“The toughest part of the transition was keeping everything whole while trying to be fair to everyone,” shared Kansas dairyman Justin Ohlde.

“We had to come up with a price that was fair because it was a big chunk of our grandparents’ retirement,” continued Ohlde who farms with his three brothers and parents. “So, we needed to be able to get started but take care of them as well. My advice would be to make it as simple as possible, and make sure everyone understands what and why things are being done the way they are.”

For the other three young dairy producers interviewed for the Round Table “These young farmers came back to the dairy,” recording the transition, timing it right, and cooperating with family were all part of their succession story. Read more on these young farmers in the December 2018 issue of Hoard’s Dairyman on pages 714 to 716.

Here’s how the other three participants answered the question, “What has been the toughest part of the transition?”

Glen Meadows Farm (Clark Egelston), Fultonville, N.Y.: The toughest part of the transition was getting it all on paper. For one, it’s a big step in general, but it was also a little harder to write down our spoken agreement than I thought it would be.

The reason I think our transition went smoothly is that no one was looking to get rich in our transition. I’m in this business because it’s my passion as it is for my uncle. I think that we both understood if we wanted to see this business continue that some compromises needed to be made on both sides.

Schulze Dairy (Chris Schulze), Holland, Minn.: The toughest part of the transition and transition planning was our timing. I entered the business in 2014 without the opportunity to really enjoy the higher milk prices, and then we have slogged through the last few years of tough economic times in the dairy industry.

There is, however, very little that we would change if we could go back and do so. There is nothing else we would rather be doing even if we could make more money in a different career.

Slaymaker Farm (Jessica and Dan Slaymaker), Mansfield, Pa.: There were definitely some tough moments in our farm transition process. One of the blessings was having the capitol already invested in the farm. Even though there were some pretty tight financial moments, we already had the farm paid off.

That being said, communication was hard with the older and younger generations desiring different things. We wish that we could have talked more openly. We definitely learned a lot from the transition process.