Cheese sales are worth a long-term investment 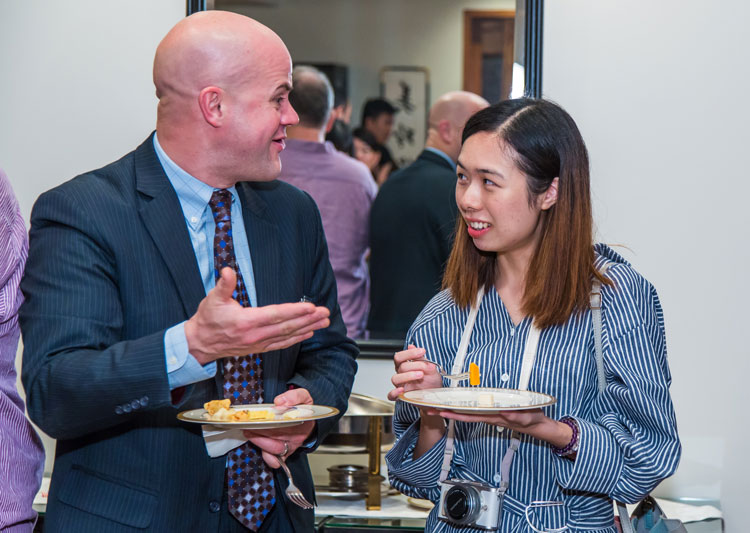 “I just know about Cheddar and Parmesan cheese,” said Vivian Kwong, a trade and commerce reporter for the Hong Kong Economic Times Limited.

For the first 39 minutes of the dialogue, Kwong had been mainly interested in the brewing trade war between China and the United States and how that trade war impacted dairy farmers’ bottom lines — an important topic indeed.

However, with an elaborate cheese and wine reception set to take place at the U.S. Consul General’s Residence, Christieson, a senior vice-president of cheese marketing with the U.S. Dairy Export Council (USDEC), brought the conversation back to the topic at hand — selling U.S. dairy products to Asian customers. After all, more cheese sales can deliver more income for the farmers he represented on the trade mission. Cheese sales also are a linchpin in growing U.S. dairy exports from 15 to 20 percent by 2022.

Hence, Christieson’s question about cheese to Kwong . . . and it was a good one.

Cheese is an acquired taste

Typically when new dairy markets open up, the first thing people do is drink fluid milk. Next in the food evolution, consumers start eating fresh dairy products such as yogurt. Finally, those people develop a taste for cheese and its spectrum of unique flavors.

This transition can take decades to develop, as children who grew up eating processed cheese slowly switch to natural cheese as more sophisticated adults.

Japan’s blue cheese boom brings to light this evolution in food palates, as blue cheese has become a market growth leader in two of the past three years. Marketers originally feared Japanese consumers might think that the strong-tasting blue cheese, with its distinctive flavor, would be considered stinky tofu and pass on purchasing it. The exact opposite transpired. Blue cheese sales are booming.

Even with this growth, Japan’s per capita cheese consumption of 5.3 pounds (2.4 kilograms) annually remains far behind U.S. consumers at 37 pounds (16.7 kilograms). But at 5.3 pounds consumed per person, Japan already has become the world’s largest cheese importer.

Imagine if per capita consumption climbs to 10 pounds?

The cheese and wine reception at the U.S. Consul General’s Residence — Consul General Kurt Tong and his wife, Mika Marumoto — was a breath-taking location to showcase some of America’s finest cheese with incredible views overlooking Hong Kong’s harbor. It was the sizzle to sell the steak . . . or in this case, the ambience to sell the flavor and aroma of cheese.

With over 100 guests in attendance, mainly cheese distributors, retailers, and food service operators, I sought out Vivian once again because I admired her questions from the earlier interview.

“Do you want to try some cheese?” I asked.

“I don’t know where to start,” Vivian said. And she meant it.

There were over 70 artisan cheeses from the America’s Atlantic to Pacific coasts, with many artisanal choices from America’s heartland. Those cheese had been expertly laid out by Chef John Esser and Gordon Craig with the U.S. Dairy Export Council. Cheese pairings included the accompaniment of ideal foods such as olives, along with an assortment of fruits and nuts.

After asking Vivian a few questions about her favorite Asian foods, I picked five of the cheeses on display and explained the attributes of each. It was a fascinating dialogue between a pair of journalists, and she wrote down the names of each cheese she sampled in her journal.

This exchange between Vivian and myself was just one of hundreds of conversations that took place that evening between USDEC staffers, U.S. dairy farmers, and U.S. cheese exporters on the trade mission that started in Tokyo, Japan, and made its way to Hong Kong. The slideshow shares some images from the evening.

“This is all part of the USDEC halo,” Christieson later said. “We’ll provide the promotional effort as an organization. But, we need the cheese exporters to sell. That’s why we do these joint missions.”

After that evening reception, the U.S. cheese export companies had one-on-one meetings with many of the cheese distributors, retailers, and food service operators the next day.