Stop BLV super-shedders in their tracks

The authors are with Michigan State University Extension 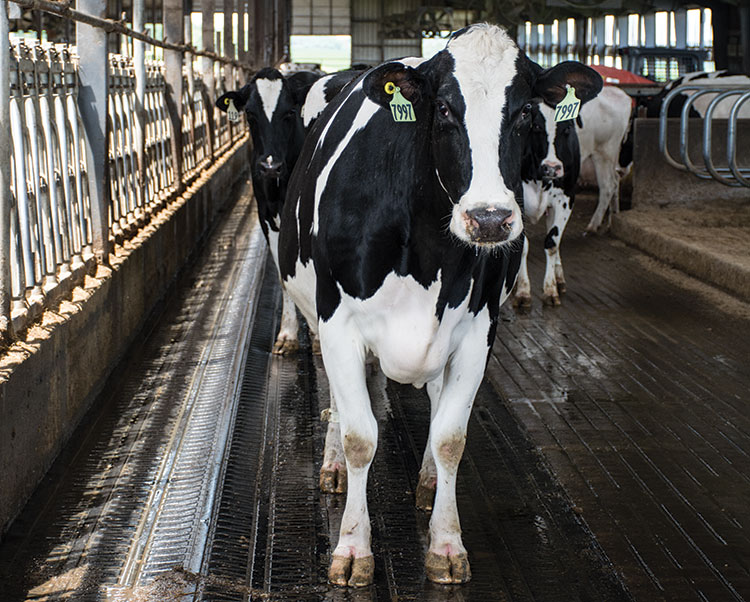 Cows that don't appear sick may still be carries of bovine leukemia virus (BLV). Finding and removing super-shedders appears to be a critical control point to reduce BLV transmission within the herd.

The prevalence of bovine leukemia virus (BLV) in U.S. dairy cattle was about 10 percent in the 1970s. Since then, that number has slowly climbed to approximately 45 percent of all dairy cattle infected, while about 95 percent of herds have at least one positive cow. Lymphoma tumors induced by BLV are the leading cause of cattle condemnation.

We are now realizing that even greater than previously suspected economic losses are associated with the reduced milk production and shortened cow lifespan that come with BLV. Many recent studies have discovered that BLV disrupts the cow’s immune system in multiple ways. This immune disruption is thought to be the underlying reason why many BLV-infected cattle do so poorly compared to uninfected herdmates.

We have known for decades how to control BLV. Over 21 nations have completely eradicated BLV from all dairy and beef herds. These nations tested for BLV antibodies, most recently with an ELISA test, and then culled the positives, or at least temporarily separated them until they could be culled. However, they were starting with prevalence rates generally under 5 percent, and government programs often paid indemnities.

In contrast, for decades the U.S. and many other countries have ignored BLV and allowed its prevalence to gradually rise. We estimated annual costs in one of our demonstration herds at $38,000 per every 100 milking cows. Most of this loss is due to less milk production and reduced cow lifespan. However, our recent national survey of 103 dairy producers indicated that only about 10 percent viewed BLV as a significant problem.

If your herd’s BLV prevalence is typical (about 45 percent), it would be economically difficult to cull all your BLV ELISA-positive cows, as well as a normally lower percentage of your young stock. So, how can you reduce your prevalence down to 5 to 10 percent where culling all the infected cattle could be feasible to eradicate the disease from your herd?

Our Michigan State University Extension study of 80 Michigan herds that tested annually for at least three years showed limits to what we can achieve by management alone. While some herds that started using single-use needles and single-use reproductive sleeves have seen small reductions in BLV prevalence over a period of three years, the pace of change has usually been slow.

Our studies convinced producers that BLV was important, but we were left with no good advice regarding how it could be controlled. We recently conducted a field trial of single-use needles and reproductive sleeves and saw no significant impact. These are Preliminary results of an intervention field trial on three dairy herds to reduce BLV prevalence (ELISA milk antibody test) by selectively culling or separating cows with the highest proviral load and/or lymphocyte counts.

We must do more

The proviral load is the number of proviral copies per cell or volume of blood, nasal secretions, saliva, milk, or other fluids. The proviral load and the blood lymphocyte count (a measure of leukemia) are highly correlated. Because the provirus is usually the infectious particle for BLV transmission, its concentration is recognized as an indicator of infectiousness for BLV and other retroviruses.

Several studies have shown that most BLV transmission is from high proviral load cattle. The standard BLV antibody ELISA test only measures the amount of antibody present and is lowly correlated with proviral load and lymphocyte count.

The proviral load can differ vastly among ELISA-positive cattle in that some cows can have several thousand times more provirus per volume of blood than other ELISA-positive herdmates. The term “super-shedder” is used for cattle with high proviral load that represent the greatest infectious threat to their herdmates.

These super-shedders are an obvious critical control point for the many routes of BLV transmission, including direct contact with nasal secretions, milk, saliva, semen, and feces. Transmission can also come through biting flies, colostrum, milk, and various types of blood borne transmission via hypodermic needles, reproductive sleeves, hoof trimming, ear tagging, and gouge dehorning. All these routes rely heavily on the presence of the super-shedders, which may be the weakest link for breaking the chain of transmission.

Our three-herd pilot field trial was the first ever demonstration that a significant reduction in BLV transmission (and prevalence) could be achieved if super-shedders were regularly removed from the herd. Every six months, these three milking herds were screened by milk ELISA through DHI.

The decline in BLV prevalence after two and a half years is shown in the figure below. In comparison, the 80 herds on our management intervention study showed no significant average reduction in prevalence over three years.

Broad national recommendations cannot be based on just these three Midwestern herds, so this field trial is being expanded to include more herds with diverse management systems and even different breeds of cattle.

The pilot study results are encouraging in suggesting that this method can reduce prevalence to a low level where it could become economically possible to eradicate BLV from the herd by culling all the remaining ELISA-positives. This has been done in thousands of herds in other nations. Inexpensive post-eradication monitoring methods to assure continued absence of BLV are well-tested in these other nations.

A test for the future

The proviral load test we had been using until spring 2018 for our research is very laborious and, therefore, quite expensive. A new proviral load test is being developed that will hopefully soon be available though the DHI organization. We have begun using this new test for our expanding field trial and for other BLV research projects, and the results are extremely encouraging.

While it may be a couple of years before the test is widely available, dairy farmers and their veterinarians can take steps now in advance of the new test. The first step we recommend is to have a BLV Herd Profile test done. This is usually done as an ELISA test of milk samples from 40 cows in the herd; the 10 most recently fresh of first, second, third, and fourth or greater lactations. Most DHI technicians are becoming familiar with this procedure.

Secondly, within-herd biosecurity should be practiced to reduce the risk of transmission of BLV among your cows by using single-use needles for all injections and single-use sleeves/gloves for rectal exams and insemination. Colostrum fed to calves should be frozen or pasteurized.

Still, all the different methods of transmission are difficult to block completely with management. The availability of an inexpensive test to detect super-shedders for removal could allow many producers to more quickly reduce BLV prevalence down to such a low level that they can eradicate it.

Find the super-shedders in your barn
By Paul Bartlett