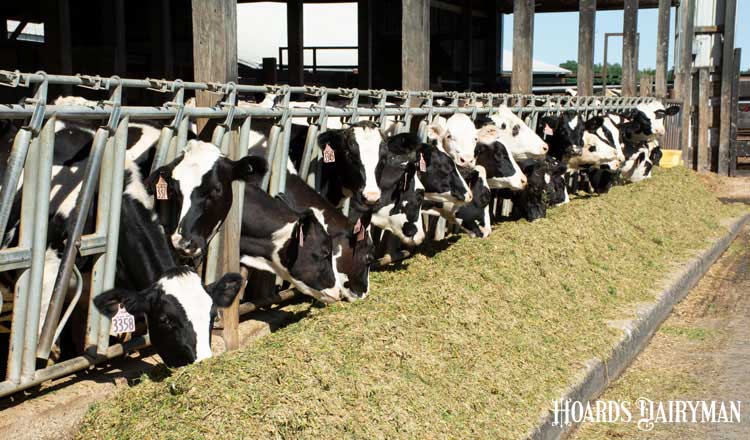 Lameness isn’t a concern among heifers on most dairy farms. In recent years, though, a heifer hoof issue has appeared, and common rearing practices may be to blame.

“We are talking about something that occurs in our best herds, in herds that have lameness in control,” Cook shared. Originally considered by many as simply a nuisance, Cook explained that hoof care experts are realizing this is instead a problem that impacts herds in unusual ways.

The syndrome affects the inner claw of the foot, and most often, it initially appears in heifers or first lactation cows.

For Cook, real concern about corkscrew claw syndrome began as he worked with a herd that initially appeared to have a growing thin sole issue, especially in first lactation heifers. After closer inspection, the herd was displaying symptoms of corkscrew claw syndrome, including a corkscrew shape to both the front and rear medial claw, wide legged walking, and shifting weight from rear legs to front legs, which leads to splaying of the front toes. Also of note, the problem began early on, when animals were still heifers.

Not always good for heifers

Cook and a pair of graduate students then visited 43 herds in 2017 to identify factors that might contribute to this syndrome. Unfortunately, some fairly common practices seem to be potential risk areas. “What’s good for cows, and how we have learned to manage cows, isn’t necessarily good for heifers,” Cook said.

For starters, the syndrome was most prevalent in heifers housed in freestall barns.

“This is not a big problem in bedded pack housing. This is a problem of freestall housing,” Cook said. He added that it is a regional problem, as the syndrome is not seen on farms with dry lots. Sand bedding — particularly coarse, recycled sand — seemed to exacerbate the problem.

Headlocks were another risk factor.

“This is a story of an animal leaning up at a feeding space, putting enormous forces on the front and back feet as it pushes for feed,” Cook explained.

In addition, limit feeding strategies put more pressure on bunk space and can create aggressive behavior at the feedbunk, causing heifers to push harder against headlocks and further elevating the hoof issue.

Improvement in heifer reproduction, leading to overstocking, seemed to be another contributing factor. Grooved concrete was also associated with a higher incidence of corkscrew claw syndrome. And for some herds, hoof trimming practices were having a negative impact.

“When you remove the axial wall in the toe region, you make the problem worse,” Cook said.

Unfortunately, this is not a condition that gets better with age. It is permanent, it impacts the skeleton, and it’s painful, Cook added.

For herds dealing with corkscrew claw syndrome, Cook provided these recommendations to improve the situation.