Whether on a football or farm field, leadership matters

Leadership is about perception. Body language and word choice matter. When both are absent, football teams and dairy farm teams flounder.

The author has been involved in large-scale commercial dairying in Wisconsin for more than 20 years and is now an account manager for Chr. Hansen Inc. 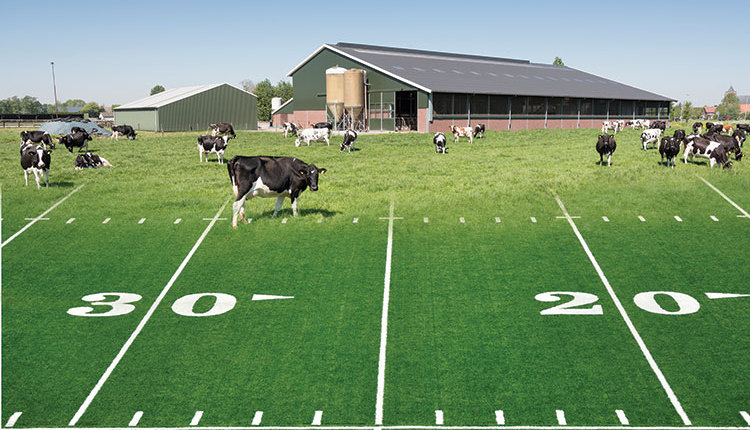 The 2018 Green Bay Packers can teach us a lot about our farms. When egos get out of hand and veterans don’t fill the leadership void, problems will occur that your dairy has not previously experienced.
It’s actually written somewhere in the state charter that a resident of Wisconsin has to be a Green Bay Packers football fan.

If you don’t have season tickets, you can add your name to the waiting list and then start making plans, knowing that your number will be called somewhere around March of the year 2361. It’s the reason that church services are finished by noon in Wisconsin, as people want to see the kickoff.

Given our passion for Green Bay Packer football, it’s been downright depressing watching them virtually implode over the last two years. The Packers finished the regular season with a worse record than the Cleveland Browns. Let that sink in . . . we have arguably the best quarterback in the NFL and (had) a Super Bowl-winning coach. Yet nearly everyone following the team knew by mid-season that the Green Bay Packers wouldn’t be in a playoff run.

Recently, there was an exposé that described infighting, mistrust, and a virtual collapse of the chain of command within the Packer organization. We’ll never know how much verifiable truth there was to “What happened in Green Bay” by Tyler Dunne, but even the most complacent observer could attest to a definite breakdown of both leadership and culture on game days.

Decay has no boundaries

There are many similarities between the decay of an otherwise championship organization and a dairy that is struggling with its culture. In both cases, a breakdown in leadership is the culprit. In both cases, egos were put ahead of what was best for the team. In both cases, as the veterans left, the rookies didn’t (or couldn’t) fill the leadership void.

Again, a person could just see that coach Mike McCarthy, quarterback Aaron Rodgers, and the rest of the players were not performing like a cohesive unit. It reminded me of visiting a dairy that’s struggling to get through a stressful time and seeing people at the end of their rope.

After an incompletion, Rodgers would shake his head and have a look on his face that looked as if he was saying, “You guys are idiots.” I didn’t see the on-field leader fired up and passionately trying to raise the level of intensity among his guys. I didn’t see him doing anything to improve the situation.

Maybe he was, but that wasn’t the fans’ perception. In the world of leadership, perception is reality. It reminded me of a dairy manager walking out to the hospital pen and seeing way too many cows with mastitis — and just shaking his head and doing nothing to motivate anyone. Of course, he’s stressed about it; of course, he’s frustrated, but so are the employees having to deal with it. Seeing a look of defeatism from their boss contributes absolutely nothing. In fact, it makes the entire situation worse.

Here’s an alternative scenario. What happens if the dairy manager says, “Aw man, you guys have your work cut out for you today. Days like this are no fun. I’ll talk with the parlor manager and see what he’s thinking.”

At this point, the employees know the situation is serious and the manager understands that. They know that he feels sympathetic about the extra work they will have to put in.

Whether on a football field or a farm, when a leader’s body language says, “You guys are idiots,” nothing good can come of the situation. So much of leadership is how we are perceived. Body language and word choice really matter.

Google defines “ego” as “a person’s sense of self-esteem or self-importance.” However, I don’t think that even scratches the surface of the gravity of the word.

A healthy ego is a must, whether you’re a dairy manager or a professional athlete. Carrying yourself with confidence and giving the perception that you’re on top of things leads to successful outcomes.

If you’re down by two touchdowns, you have to project that you’re not rattled and have the situation under control. If your parlor is two hours behind schedule and then the power goes out, your attitude has to have people believing that you’ll figure things out and see the team through it.

The flip side, of course, is when there’s too much ego or conflicting egos. Even a fair-weather fan of the Packers could see our quarterback often didn’t believe in the game plan put forth by the coaches and was calling audibles. Maybe if quarterback Rodgers and coach McCarthy could have set aside their egos earlier, the two of them could have had constructive conversations and solved some of the underlying issues.

It’s like telling your harvesting crew to start chopping hay, then realizing it’s a little too wet. You don’t want to admit you’re wrong, so you keep chopping, and your haylage ends up being a big pile of nastiness. If your ego is such that you can’t admit you’re wrong and you can’t take a little ribbing from your teammates, they’re going to hope for your failure and even participate in it.

The other recurring theme evident in the Packers’ collapse was the loss of veterans. As the experienced Packers retired or got traded, their replacements didn’t fill the void when it came to leadership. It sounds like a dairy that just expanded and went from having four seasoned veterans milking in the parlor to a rookie squad because the veterans got promoted to crew leader, assistant herdstaff, feeder, and night supervisor.

The new employees don’t have the experience and aren’t as familiar with the culture of the dairy. When you have veterans who have been there for years, they all know the standards. They know that leaving a blue milker’s glove in the parking lot is completely unacceptable and is insulting to other coworkers.

Whereas with a new team, if someone carelessly leaves a milker’s glove in the parking lot, there may not be anyone with the character and the guts to say, “Hey, don’t do that.” People who aren’t familiar with the standards and culture are far less likely to correct someone’s bad behavior — they themselves are still learning what is acceptable and what is not.

A lot to learn

We can learn a lot from the 2018 Green Bay Packers: When egos get out of hand, if leadership doesn’t correct it and the veterans don’t fill the leadership void, your haylage pile may go bad, and you will get milker’s gloves in your parking lot. The result is you end up with a worse record than the Cleveland Browns, who haven’t had a winning season since 2002.

Common Threads - May 2022
Features
Related to:
features, features
In Features