Not every choice an owner or manager makes will be a winner. Learn from your mistakes and move on. 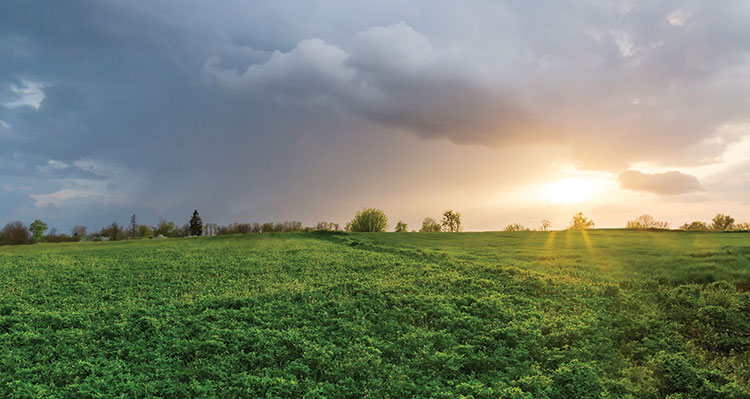 It wasn’t suppose to rain on Tuesday and you made the call to cut alfalfa on Monday. Now it got rained on. That’s life on the dairy. Remember, use the best information at the time, make a decision, and lead with confidence.

Suffice to say, each of us can recall a “really bad day” at the dairy. In fact, it probably isn’t too hard to muster up a list of “absolutely horrible days.”

In 2011, for instance, a massive blizzard rolled in on a Sunday morning. In anticipation, we had our normal plans in place for what was predicted to come. There were six of us arriving at 2 a.m. — all from different directions, all in four-wheel drive trucks — planning to get enough snow moved to at least get the employees in and out at 5 a.m. for the shift change and to start getting the milk tankers headed to town.

The trip to the dairy was treacherous. The municipal snowplows hadn’t been out yet, and I was having to use my own plow just to bust snowdrifts and make it through. About 2 miles from the dairy, I couldn’t see the road and planted my truck straight into the ditch. What was worse was that the next car behind followed my tracks right into the ditch and blocked the actual road. That was a problem given that two more members of the 2 a.m. crew couldn’t get to the farm now that the road was blocked.

While I sat there in the ditch trying to figure out what to do, one by one the other four guys who were trying to get to the farm called me to say they were stuck somewhere or simply couldn’t get to the farm.

Needless to say, writing that off as “a bad day” would be a sheer understatement. There was a legitimate possibility that if I had made a bad decision, someone would get hurt, or worse. I was stressed. My stomach was in knots, worried sick that an employee would make the bad decision to abandon his stuck car and try to walk for help while I sat here in my truck waiting for a tow.

I recall this particular episode knowing that anyone who has spent any amount of time at a dairy has faced similar situations. Most managers have been in a situation where if the wrong decision were made, there would be a visit from the ambulance, Occupational Safety and Health Administration (OSHA), the sheriff, or the television news helicopter.

My point is, managing a dairy is really, really hard. We’re operating multi-million dollar businesses that absolutely have to run 24 hours a day, seven days a week, and 365 days a year. The farm is filled with biological systems that depend on the weather. It’s staffed with people, some of who may not speak English. Farms are regulated by government agencies, some of which might like to see us cease to exist, and when our customers turn on the television, they see some misinformed Hollywood stars calling for the boycott of our products.

Most critics couldn’t survive running one of these operations — and most of us who have still don’t appreciate just how difficult it is running a farm.

Lots of industries have employees who are from other countries and speak other languages. My brother is a senior software engineer. He’s employed a great deal of staff members over the years from different countries who speak different languages. There’s a big difference between software development and farm operations . . . when there’s mistakes in translation, the software gets messed up. Contrast this with a new non-English speaking employee on a dairy who mistakenly mixes the bleach and the acid and blows up the milk house.

A person in sales who doesn’t meet his annual quota gets a bad annual review and a smaller paycheck. A dairy manager who sells all of his manure to the local crop growers doesn’t have a choice of having a “bad” sales year. If he doesn’t sell enough product, he’s got a potential environmental catastrophe on his hands.

Of course, while all those potential crazy scenarios are going on, someone still has to figure out how the bills are going to get paid with the razor-thin margins our industry has been dealing with over the last half decade.

The reason I point this out is simple. When I’m visiting farms in my current profession, I’ll often talk with a dairy manager who’s letting the job “get to him.” I see people get caught up in “could have, should have, and would have” scenarios all too often, instead of saying, “At the time of my decision, I looked at the information in front of me and chose to go down path B. We’re going down path B, get on the bus, keep your arms inside, and let’s get moving.”

When we are giving off an image of waffling and lethargy, it becomes very difficult for a manager or owner to carry themselves with the right balance of confidence and compassion that’s needed to successfully run a dairy. Yes, our employees must absolutely know that we genuinely care about them as individuals, but at the same time, there needs to be no doubt as to who is in charge. There needs to be no question that the leaders are competent, experienced, and driving the bus in the right direction.

I see this all too often in younger dairy managers — and understandably so. If you’re out of college a few years or if you’re farming with your parents like you’ve done your whole life, it can be really difficult to get your mind around just how tough dairying is. As a result, it’s really easy to let a “bad” decision wreck your confidence.

A person for whom the dairy is their world may not realize that the other 45 decisions they made that day were “good” decisions and allow themselves to celebrate those 45 little victories. So you missed the chance to lock-in soybean meal at a low price — oh well. Evaluate the decision and move on. Your night shift lead milker just quit . . . that stinks . . . life is going to be tougher for a few weeks. You know what’s going to happen when we get the new night supervisor trained? You’ll have to make a decision as to whether to pull cotton out of the diet . . . hopefully, you make the right call. Keep learning and keep growing.

This is the world we live in, a constant state of trying to portray confidence and competence while we’re dealing with the 200 decisions that have to be made that day. Even on the good days, we make the right call on 75% of them.

Dairying is really hard — and will continue to get harder. For most people, a day at the helm of a commercial dairy would feel like being Barney the Purple Dinosaur going up against Godzilla in a street brawl. However, we can take a measure of solace in knowing that the sun will rise and the sun will set tomorrow, and we’re not alone. Every dairy manager went through the same learning curve.

We can learn from our mistakes, carry ourselves with confidence, and learn to (almost) embrace the crazy events that we face on our dairies.