He’s unmatched in the showring

While David “Dave” Bachmann Sr. fully retired from dairy farming a few years back, the Wisconsin dairyman continues to write new chapters when it comes to his ongoing impact within the Holstein breed.

“That’s a total of 88 Excellent cows with 16 or more consecutive Excellent cows . . . every one of them has seven generations of Excellent Pinehurst cows behind them,” said the Sheboygan Falls, Wis., dairyman.

Pinehurst Farms traces its roots back to 1845 when David Giddings cleared the land three years before Wisconsin joined the United States as the 30th state. In 1912, Peter Reiss, president of C Reiss Coal Company, purchased the well-established farm from the Giddings family. Reiss set out to make it a modern-day, showplace farm and his summer home. Peter Reiss died in 1928.

Peter Bachmann, in 1945, and David Bachmann, in 1947, came to Pinehurst to help manage the property. In 1948, they purchased a John Deere agency in Sheboygan Falls, with Peter assuming the management of the dealership and David remaining at Pinehurst. The Bachmanns were “city boys,” sons of a Chicago doctor who had died in his early 40s. Their mother was the daughter of Peter Reiss from Sheboygan. In 1950, David and Peter purchased Pinehurst from the Peter Reiss Estate.

In 1955, after operating the two entities as a partnership, they agreed to dissolve the partnership with David becoming sole owner of Pinehurst and Peter taking over the Bachmann Implement Company.

“The better the team you have, the better the success,” advised Bachmann. “I came to Wisconsin in 1947, and I did not have very much farming experience. People told me, ‘You can’t find good help anymore. Nobody wants to work,’” he said.

“Back then, I hired three local farmers who worked for me the rest of their lives,” reminisced Bachmann. “Those three guys had 120 years of service to Pinehurst Farms. I can’t thank them enough.

Those three men worked so well together and were tops at all phases of farming. This allowed Bachmann to engage in other related agricultural endeavors to enhance knowledge, income, and exposure to cattle all over the United States. This took him into the cattle sales business. He became an auction sales manager in partnership with Henry P. “Sonny“ Bartel and added Darrel Pidgeon and Greg Bovre to the staff. 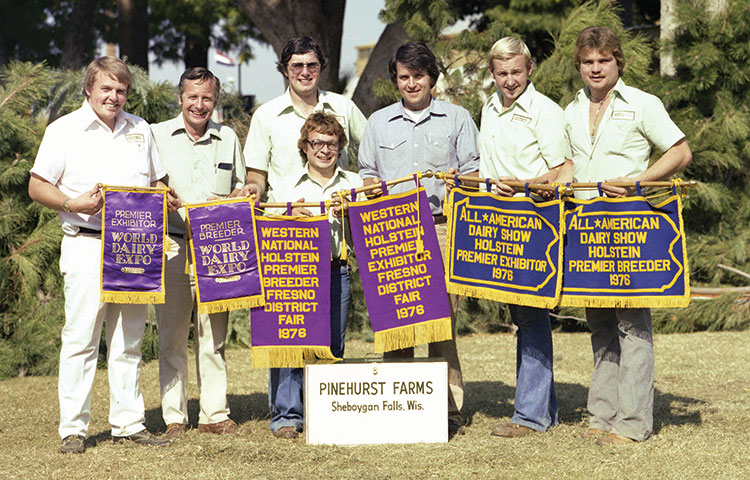 The 1976 show season was historical as Pinehurst Farms became the first herd to win both Premier Breeder and Exhibitor at all three National Holstein Shows. Shown (L to R) in this Ken Vial photo are: Greg Bovre, David Bachmann Sr., Ken Empey, Norm Nabholz (in front of Empey), Barry Quickfall, Rick Bovre, and David Brown at the Western National in Fresno, Calif. Bachmann, Empey, Nabholz, and Quickfall would all go on to win the Klussendorf Award.

One of three nationals

“At the start, we didn’t know if it was going to make it . . . but then it gained superiority over all shows,” said Bachmann, who exhibited at the very first World Dairy Expo in 1967 and continued to show there through the turn of the century.

So shaky was World Dairy Expo’s start, Bachmann took his famed show herd to all three major dairy shows following the demise of the National Dairy Cattle Congress in Waterloo, Iowa. That was an expensive effort, but an effort Bachmann took seriously. The undertaking was important to secure All-American nominations. Those labors paid off as Pinehurst was the leading exhibitor and breeder of All-American nominees from 1975 to 1981.

The 1976 show season was a defining moment in show history as the Pinehurst Farms’ show herd became the first and only showstring to be named Premier Breeder and Premier Exhibitor at all three national shows — Harrisburg, Pennsylvania’s Eastern National; Madison, Wisconsin’s Central National; and Fresno, California’s Western National. Pinehurst repeated that feat in 1980, and no herd has replicated that accomplishment in the past four decades.

“Showing cattle is a sport,” said Bachmann, known to many friends simply as “Senior.” “We enjoyed the competition.”

Specifically at World Dairy Expo, Pinehurst exhibited four Grand Champions in four different breeds — Ayrshire, Holstein, Jersey, and Red and White. The feat remains unmatched after 52 World Dairy Expos. Of those champions, the Ayrshire and Jersey went on to be named Supreme Champion. 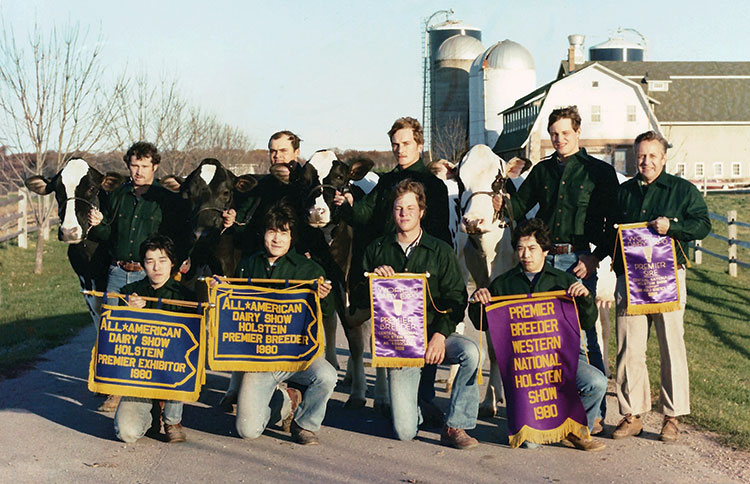 The 1980 Pinehurst Show crew repeated the amazing feat from 1976 by winning both the Premier Breeder and Premier Exhibitor banner at all three national shows. Terry Lee headed up the show crew and recruited some of the most important talent. Shown back row (L to R): Terry Lee, Greg Henderson, Greg Mell, Jim Lewis, and David Bachmann Sr. Shown in front are Japanese and American farm trainees. Lee went on to become the youngest person to win the Klussendorf Award in 1981. Others who worked with Bachmann and won the Klussendorf Award were Buddy Fleming, Joel Kietzman, and Bert Stewart.

Throughout his life, Bachmann loved the hunt of finding, helping prove, and merchandising bulls. Among his finds were 10 bulls that Bachmann discovered and later sold to A.I. studs for well over $100,000. This took place prior to 1970.

Bachmann’s first All-American was a bull named Pinehurst Peerless. The Nosawa Company of Japan purchased him for $15,000. In 1968, that was the highest price Pinehurst Farms had ever sold a Holstein.

That first sale got Bachmann started in the export business. Over the next 25 years, he visited Japan once or twice a year, putting together select animals for buyers and working with several trading companies.

As part of those sales efforts, Bachmann became a master of data. As a result, his catalog business eventually produced more than 700 sale catalogs.

“We exported thousands of animals all over the world, including the Orient, Western Europe, and Eastern Europe,” said Bachmann. “It was a lot of fun and a great opportunity.

“We also managed four National Holstein Convention Sales,” he said. “We had the first sale with over $1 million gross sales average. We were pretty proud of that achievement,” said Bachmann, who served an eight-year stretch on the Holstein Association USA board of directors, later chairing its finance committee.

When listing the very best Holstein breeders in North America, Bachmann’s name is on a short list of the elite. “He is one of history’s all-time great breeders of registered Holsteins,” commented Horace Backus, the “Dean of Pedigrees.”

He bred or developed two 97-point cows; 12 96-point animals; and 44 individuals that were 95 points or greater. For this and many other breeding achievements, Bachmann won the Klussendorf Trophy at the 1995 World Dairy Expo, and National Dairy Shrine named him the Distinguished Cattle Breeder the very next year.