The Brandel family had no idea the Milking Shorthorn calf they purchased a few years ago would lead them to the winner’s circle at World Dairy Expo not once, not twice, but three years in a row. 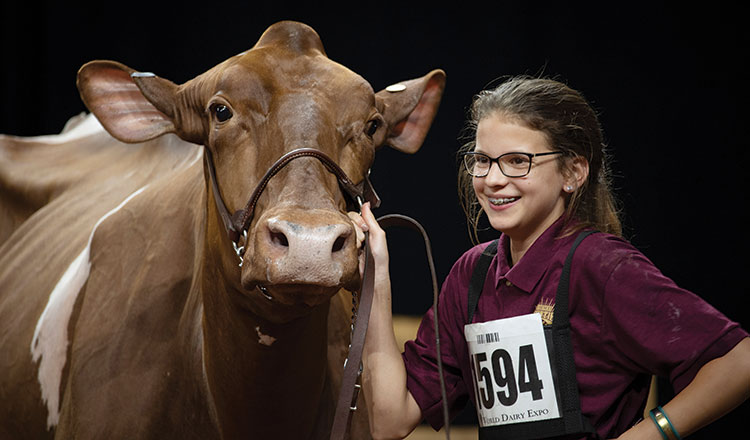 Maple Fudge of 12 Oaks has taken Ashley Brandel and her family from Lake Mills, Wis., on a sweet ride, earning Grand Champion honors of both the Junior and Open Shows at last year’s World Dairy Expo.

There are some calves that seem destined for greatness from the start. They have the look, the pedigree, or the numbers.

Then there are others that are diamonds in the rough, an unexpected hero. That was the case for Maple Fudge of 12 Oaks, the Grand Champion Milking Shorthorn of both the Open and Junior Shows at last year’s World Dairy Expo.

Ashley Brandel was just 8 years old when her family attended their first Wisconsin Dairyland Milking Shorthorn Sale. Matt and Tracy Brandel, who milk mostly Holsteins on their family’s farm in Lake Mills, Wis., wanted to dabble in a different breed with their children. After doing some research, they decided to check out the Milking Shorthorn sale.

Earlier in the day, Ashley’s older brother, Colton, purchased a calf, Apple, that became the foundational cow of his Milking Shorthorn herd. As the sale wound down, Ashley had not bought a calf yet, but she had an eye on one she thought was very cute. That calf was Fudge, the last animal in the sale.

Tracy never really said her daughter could bid on the calf, but as she was busy gathering up the rest of the family, she heard the auctioneer say, “Sold to the little girl.” And with the final tap of the gavel, Fudge was theirs.

Fudge and Apple found their new home at Straussdale Holsteins. That is where Matt farms with his uncle, Jim, and cousin, Bruce. They milk 230 cows, raise all their replacements, and run about 750 acres of cropland. Bruce’s oldest daughter, Mariah, works full time on the farm, and Tracy is also active on the dairy in addition to working at the Wisconsin Department of Agriculture, Trade, and Consumer Protection.

Matt and Tracy’s children, Colton (age 14), Ashley (age 12), Katie (age 10), and Justin (age 9), all actively work on the dairy, along with their cousins. “The kids all work well together,” said Tracy, “and our farm family has been very supportive of the kids’ projects.”

The Brandel children are busy with school, sports, and working on the farm. Their chores include milking cows, feeding calves, helping with harvest, and doing whatever else needs to be done.

The family is also very active in their 4-H club, the Southside Eagles. The children participate in speaking contests, do community service, and show beef, sheep, horses, and — of course — dairy.

Fudge made a few appearances at local shows as a calf and heifer. It wasn’t until she started bagging up before her first lactation, though, that they realized she could really be something special.

After earning reserve champion honors at the open show at Wisconsin State Fair in 2016, a friend of the extended family, Brett Hildebrandt, approached the Brandels about housing Fudge. They took the Hildebrandt family up on that offer. “They got her on a show program,” said Tracy. “Their guidance and talents really developed her.”

The next stop for Fudge was the 2016 World Dairy Expo. The Brandels had never shown there before, and Tracy said it was overwhelming at times.

“I remember thinking, ‘We don’t belong here,’” Tracy recalled. “We were out of our league.”

Yet, it was worth the steep learning curve, because Fudge won her Junior Two-Year-Old Cow class and then went on to be named Intermediate Champion and Grand Champion Milking Shorthorn of the Junior Show. That meant a trip to the Supreme Champion ceremony for Fudge and her leadsman, Ashley.

“It was really cool to be under the spotlight in my first year,” she said.

Fudge headed back to World Dairy Expo in 2017 as a Junior 3-year-old. Once again, she won her class and was tapped Intermediate Champion and then Grand Champion of the Junior Show.

As a 4-year-old, Fudge was ready to make another trip to Madison. Tracy said they knew the 4-year-old class would be tough, so their expectations were not too high. However, 2018’s World Dairy Expo surpassed the two years prior, as Fudge not only won the Junior Show, but she was also chosen as Grand Champion of the Open Show.

“I get emotional when it comes to good cows, and it’s pretty cool to make a little girl grand,” announced Judge Brian Behnke of Albany, Wis., when he named Fudge as the Open Show Champion.

The Brandels are still in awe about the success Fudge has had. “We just wanted to find two foundational cows for the kids,” Tracy said. “Never in a million years, never in our wildest dreams, did we think any of this would be possible.”

Even more important to the family are the friends they’ve made on this journey. “We have so much gratitude for all the people we have met who have given us the best part of them,” Tracy said.

Ashley agreed. “The people have been great, both in and out of the showring,” she said.

“We are also excited to be part of the Milking Shorthorn genetic expansion,” Tracy said, “but the biggest blessing in all of this is the people we’ve met.”

It starts in the barn

Showing isn’t just fun and games for the Brandel crew, though. Matt, Tracy, and the children all work hard alongside their extended family to operate their dairy farm.

“Times are tight, and there is a lot of distress in the dairy industry right now,” said Tracy. Both Matt and Tracy were expected to understand the financial side of dairy when they were showing and growing up on dairy farms, and they instill those same life lessons into their children.

For this reason, Tracy said the kids’ projects must cash flow. For instance, to help pay for their trips to World Dairy Expo, Colton and Ashley worked nightline duty at the show.

“We are very proud of the kids for the time they have put into their dairy projects,” Tracy said. She reminds them often that success in the showring begins at home.

“It starts in the barn first,” she said. “You have to work for it, and you have to pay attention to details.”

Having the kids so involved on the farm is something Matt and Tracy very much enjoy. “It is super rewarding to work beside the kids. That is my favorite part,” Tracy said.

With all the lessons they are learning on the farm at an early age, the future for Ashley and her siblings looks very bright as they grow up and become even more involved in the dairy industry.

And as for Fudge? After being flushed, the 92-point cow has been bred back to calve in the spring. She won’t be making the trip to World Dairy Expo this year, but the Brandels look forward to bringing Fudge back to the colored shavings in the future.

This dairy farming Olympian ran toward her goals
Hoards at Expo
Related to:
HAE, WDE, shows
In Hoards at Expo 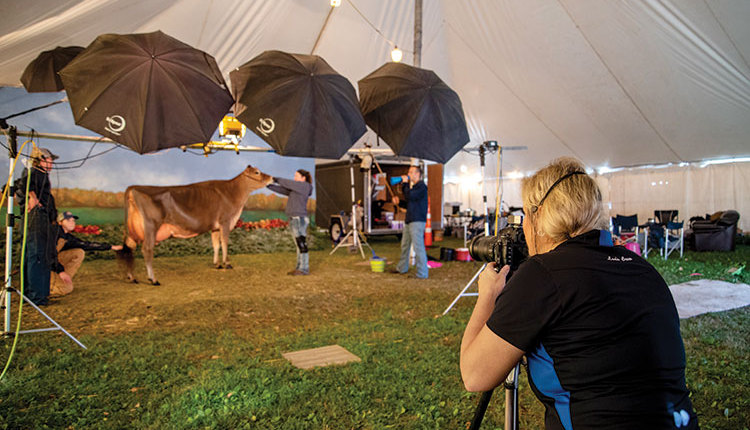 Getting the best picture one shot at a time
By Abby Bauer, Senior Associate Editor