Farm Tour is in its 11th year, and Bryan’s motivation for doing these shows on farms is quite simple. 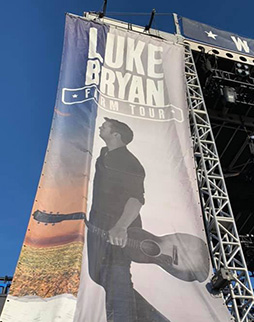 “Growing up as a kid in a rural community, we never had big concerts come to my area,” he said in a media teleconference held prior to the tour. His goal for Farm Tour was to bring entertainment to more rural areas while promoting agriculture in the process. Bryan mentioned his small town roots and admiration for farmers.

“It’s people working in really tough situations doing really tough jobs. Farmers are feeding the world, and they are trying to feed the world better,” he said. “I am so honored to attach my name to something so positive.”

Each year, Farm Tour holds concerts at six farms. The tour originally started in the Southeast and has now made its way to the Midwest. This year, concerts are being held in Kansas (two), Michigan, Ohio, Oklahoma, and Wisconsin.

Located near Marshall, Wis., Statz Brothers Inc. was contacted by Luke Bryan’s promotion group in the spring of 2017. Once chosen, they were not able to tell anyone until the tour dates were announced this summer.

Amanda Jolma, the farm’s assistant to the managers, was appointed the main contact between the farm and the concert coordinators. Over the next two years, meetings were held to plan for the event, which brought 20,000 concertgoers to the farm the evening of September 26.

Joe Statz, who operates the dairy with his cousins, Troy and Wesley, and his sons, Zach and Austin, looked forward to the challenge of hosting such an event.

“It was something different to do,” he said. “It was also a way to get agriculture’s name out there.”

The Statz family is used to planning for a large occasion, as their 4,500-cow dairy was the host site for the 2015 Farm Technology Days, a traveling trade and educational show held in Wisconsin each summer. Hosting Farm Technology Days proved they could pull off a large event, Jolma said.

After all the prep work, the family was able to enjoy the concert and was pulled on stage to be recognized during the show.

Beyond the entertainment factor, Farm Tour also supports good causes. Bayer has partnered with Bryan the last five years to provide meals to those in need and scholarships for rural students pursuing further education. Every time someone uses the hashtag #HeresToTheFarmer on social media, Bayer donates a meal to a hungry family through the Feeding America program. Their goal for this year is to donate 1 million meals.