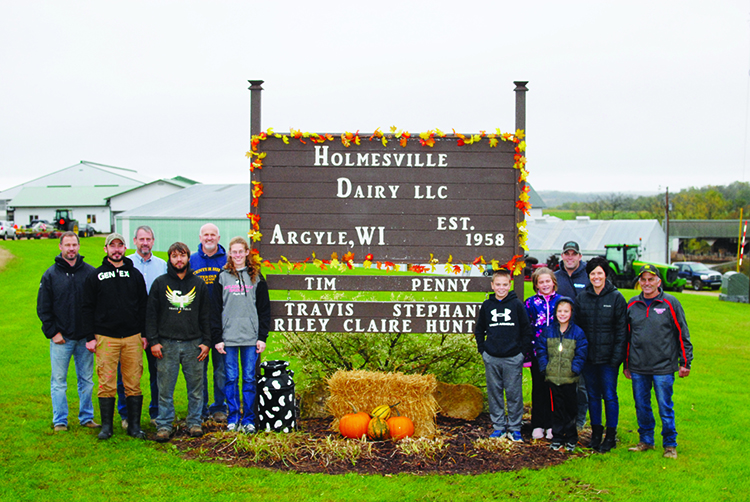 A voluntary waiting period (VWP) of 88 days is the longest calving-to-breeding period among all the finalists in this year’s Dairy Cattle Reproduction Council’s awards competition.

“We recently raised this waiting period by 10 days to try and improve our peak milk,” said Travis Holmes, a Platinum winner of the Dairy Cattle Reproduction Council’s 12th annual awards competition. “After calving, all of our cows are bred at 88 days whether they are first lactation or are producing high volumes of milk,” said the Argyle, Wis., dairyman who operates Holmesville Dairy LLC.

“For the heifers, they are bred at 14 months of age, and we use sexed semen the first two breedings,” continued Holmes. “If they don’t get bred on the first two services with sexed semen, then we will use beef semen on heifers.”

All six of this year’s Platinum winners of the Dairy Cattle Reproduction Council’s awards share additional insight in this Hoard’s Dairyman Intel as well as the Round Table found on pages 675 to 678 of the November issue of Hoard’s Dairyman. This year’s competition drew 105 nominations — the second most to date.

Here are additional responses to the question, “What is your voluntary waiting period?”

Britannia Dairy, Flandreau, S.D.: All first-service animals are set up on double ovsynch with a VWP of 65 DIM (days in milk) . . . although we sometimes drop below this if our heat detection system picks up a heat one or two days before the planned time breeding day. To keep things simple and streamlined, we synch all lactating cows for the same VWP.

For our Jersey heifers, we start breeding at 12 months of age, and any crossbred heifers with lineage from previously purchased animals are bred when they are the same size as the Jerseys so they don’t get too big at calving. We previously considered a lower VWP for our heifers, but our Zoetis representative showed us data that proved 12 months of age is the sweet spot for Jerseys in order to maintain and improve first-lactation milk yield.

Kayhart Dairy, Addison, Vt.: We have the same VWP for all cows, 70 days. We talked about extending it last year to allow for longer lactations and to give first-lactation animals a bit more time to continue growing their frames. It was decided to keep it at 70 to have a larger percentage of the herd at peak milk. We also couldn’t really find anything broken at 70 days, so we decided to leave it alone.

The VWP for heifers is 380 days at which point we begin heat detection. We want to see our Holstein heifers 50 inches tall, with good body condition and acceptable hip width. Heifers are tail chalked and observed daily. Heifers not seen in heat by 395 days are given prostaglandin (Lutalyse) weekly until they are serviced. Nonresponders will get a controlled internal drug release (CIDR).

Red Top Jerseys, Chowchilla, Calif.: We have never made breeding decisions based on peaks or production but have gone back and forth over the years with voluntary wait periods. We have settled into a nice groove the past couple of years and haven’t changed much since. All milk cows, regardless of parity, are bred first service off of double ovsynch 68 to 74 DIM. Virgin heifers are bred starting at 12 months of age.

Schilling Farms, Darlington, Wis.: Most cows receive first A.I. via ovsynch between 87 and 93 DIM. We have seen positive results in our conception rates and peak milk by raising our VWP for our ovsynch from 60 to 87 days.

With improving first-service conception rates, we have slowly raised our VWP over the years with favorable results in both conception rates and improved peak milk. Most recently we raised our VWP by seven days. We also did this to move our hoof trimming prior to breeding . . . previously cows were getting trimmed four days after the first ovsynch.

Virgin heifers are bred starting at 13 months of age.

Wenzel Hilltop Dairy, Hilbert, Wis.: The VWP is different for young versus mature cows. The first-lactation animals have a VWP of 79 DIM, while the second-lactation and greater VWP is 65 DIM. All cows are bred to a double ovsynch on the first service.

Is there a place for FMMO modernization?
By Corey Geiger, Managing Editor