Let’s tackle these basic, but important questions related to teat hygiene and health.

The Pasteurized Milk Ordinance (PMO) states, “Teats shall be treated with a sanitizing solution just prior to the time of milking and shall be dry before milking.” Premilking teat disinfectants are designed to meet the rules for interstate shipment as listed in the PMO.

Keep in mind that premilking teat disinfectants do not completely eliminate all bacteria. At best, the most effective premilking teat cleaning and sanitizing can reduce bacteria counts by 85 percent.

The real value of predips was established from research in the 1970s and ‘80s, some of which was published by Cornell University. An example is a paper by Dave Galton and his colleagues, “Evaluation of udder prep on intramammary infections,” which was published in 1988. The discovery was that reducing bacteria on teats before milking reduced the incidence of new environmental mastitis cases.

The other important reason to disinfect teats before milking is to harvest a safe food product. Besides pasteurization, little can be done to milk at the processing plant to fix high raw bacteria levels. The largest portion of bacteria in raw milk typically comes from the teat skin. Keeping teats as clean as possible between milking has the greatest impact on the success of disinfecting the teat prior to milking.

Each class of skin moisturizer functions differently, but the goal is still the same — to provide a teat surface that is free of dry or cracked skin.

Foaming a dip typically reduces the amount of dip used per application. Interestingly, the viscosity of the dip has a major influence on the amount of dip used per application. A thick dip drips less but you use more because more product sticks to the teat surface. Application of dip via spraying usually raises dip usage by 15 percent and teat dip coverage on the entire teat surface is typically the worst. 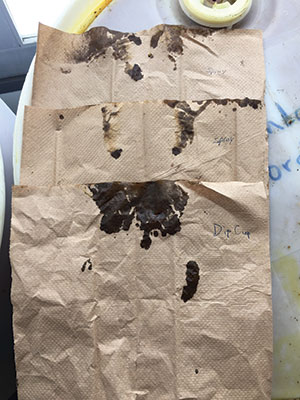 A towel test can determine teat disinfectant coverage on the teat skin surface.
Check for yourself

The active ingredient in teat disinfectants that kills bacteria is called the germicide. There are different classes of germicides used in pre- and postmilking teat disinfectants. All germicides that come in contact with organic matter are weakened, which means there is less germicidal activity to kill the bacteria under high organic load.

There are mainly two classes of germicides used in teat disinfectants:

Have you ever heard of a “barrier” teat disinfectant and wondered what it is and what is it designed for?

There is no standardized definition of a “barrier” disinfectant that is agreed upon by the industry, academia, or government officials. Barrier disinfectants usually have polyvinyl alcohol (PVA) added to them with the idea that the PVA will create a “plastic-like” barrier over the opening of the streak canal.

The plastic-like material that makes detergent “pods” is an example of PVA. The “barrier” is designed to reduce the risk of bacteria migrating through the dip after it is dry, thus preventing colonization of bacteria on the teat skin. Barriers are postmilking teat disinfectants.

Barrier dips were designed to be used during wet conditions, most notably the rainy season in the western U.S. when cows are housed outside or during extensive periods of humidity. One of the drawbacks of “barrier” dips is they take an extended period of time to dry as compared to a nonbarrier postmilking teat disinfectant. This slow drying characteristic increases the risk of organic matter sticking to the “barrier” on the teat surface, making the teat harder to clean at the next milking.

Barriers also are the most difficult type of teat disinfectant to remove from the teat skin prior to milking. Barriers, when used during specific environmental conditions (weather and bedding type), may help with udder health issues.

The importance of pre- and postmilking teat disinfectant is in reducing the bacterial load on the teat surface and prevent mastitis. There are many questions to be asked when choosing a teat disinfectant, such as application method, dip usage, class of germicide, and skin moisturizers, to name a few.

Milk Quality
Time to get a grip
comments powered by Disqus