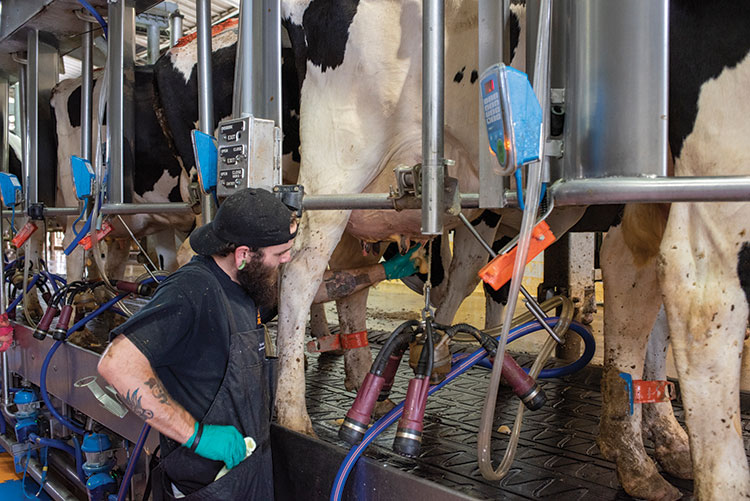 Over the last century, milk production in dairy cows has climbed dramatically. Along the way, udder and teat conformation have changed just as substantially. However, the milking systems that harvest milk basically do so just as they did at the start of the 20th century — by applying vacuum to the teat end within a double-chambered teat cup.

To be fair, milking into a pipeline versus a bucket, getting the cow’s udder above the milk line, electronic pulsation, automatic cluster removal, and milk meters were important advances. Also, milking protocols that help prevent mastitis have become more accepted. Thus, the dynamic relationship between the cow, producer, and machine has been beneficial for the dairy industry, and it has allowed more milk to be harvested with less labor and better quality.

Enhanced milking center productivity has been interlinked to larger herd size; so much so that farms with over 1,000 cows account for more than half of all cows in the U.S. dairy herd. Taking that one step further, more than two-thirds of the milk supply is produced by herds with over 500 cows.

To attain better milking productivity, dairy producers have invested considerable capital into milking systems. Depending on factors such as milk production and dairy markets, the timeline for the return on investment varies. This adds considerable pressure on farm finances.

The key force that drives milking center operations for many dairies is the number of cows that are milked through the facility each day. Thus, the parlor — just like housing and feedbunk space — becomes one of the critical “bottlenecks.” Many producers strive to find the balance between “parlor efficiency” and growing their operation. However, this has created other challenges along the way. Most notably, these challenges include employee availability, training, and engagement due to fast-paced and repetitive milk harvesting tasks. Also, the demand for higher milk quality and consumer concerns over the welfare of dairy cattle impact milking management.

Ask any dairy producer or herd manager what comes to mind about milking their cows, and labor availability and protocol compliance often top the list. The other major concern is likely to be “keeping the cows on schedule” through the parlor. This is especially the case where milking times for groups of cows are synchronized with cleaning of pens, feeding, and other needs such as breeding and herd health.

Most herds track parlor efficiency. For example, turns or loads of the parlor per hour, number of cows milked per hour, number of cows milked per employee per hour of work, or milk harvested per hour (or shift or day) all can be counted among the key measures of milking success. Thus, in many herds, the primary goal has become to milk as many cows as possible in the shortest time as possible.

But are we missing something?

Milking efficiency is the percent of time that milk flows near maximum while a unit or cluster is attached to a cow. For example, if a milking unit is attached for five minutes, and milk flows for four minutes and 45 seconds, the cow’s milking efficiency is 95%. That math works out to 285 seconds divided by 300 seconds. When milk isn’t flowing while the unit is attached, it’s not only inefficient but, more importantly, it creates high vacuum on the teats, which disrupts blood flow and may decrease milk quality and milk yield.

There are two primary reasons for poor milking efficiency:

Both of these problems can leave cows “high and dry” and expose teats to high vacuum levels. We’ll focus on the pitfalls of premilking protocols that emphasize high cow throughput in the parlor. In the second article of this series, we’ll discuss the consequences of these pitfalls.

It’s all about milk letdown

Teat stimulation before milking — rubbing the udder, stripping, automated brushes, or drying with towels — activates nerves in the udder to carry an “electric signal” to the pituitary gland in the brain. The pituitary then releases oxytocin into the blood and to the udder. It takes one to two minutes to reach optimal oxytocin levels, which forces muscles that surround the milk ducts to “squeeze” milk to flow to the teats.

The two important points about oxytocin function are:

Unfortunately, many herds sacrifice adequate premilking preparation to enhance cow throughput in the parlor. In fact, in our study of Michigan dairy herds, we found that larger herds tended to have:

Is this the new normal?

What is the balance between parlor efficiency and milking efficiency? Compared to a simple measure, such as “How many cows were milked through my parlor today?”, the impact of bimodal letdown seems vague. Historically, we believed bimodal letdown was undesirable because it elevated the unit on times or even raised the risk of mastitis.

Bimodal flow may reduce milk quality and teat health, but the overall impact on a herd is difficult to measure. Thus, like subclinical mastitis that is often overlooked compared to clinical mastitis because it is more difficult to detect, the impact of poor milking efficiency is often overlooked compared to parlor efficiency. In our next article, we’ll expand on how bimodal milk impacts milking performance of the cows and the bottom line of milk productivity in a dairy herd.

It’s all in the flow
By Rhyannon Moore, Michigan State University