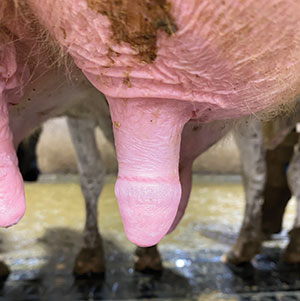 During bimodal letdown, milk quickly empties the teats, leaving the teat deflated. This creates an air space between the teat and the liner. The ensuing high vacuum causes poor blood flow, swelling, and constriction of the teat canal — all of which combine to reduce milk flow.
What would be your first thought while standing at the palpation rail for routine pregnancy checks if you saw cows running by, back to their pen, udders full, streaming milk? I hope some of the questions that might come to mind would include, “Didn’t they just come from the parlor? Shouldn’t they have been milked?”

As practitioners, the authors of this column had that experience one morning and also were confused by this turn of events. Upon talking with some of the employees, we found out that the parlor was “behind schedule,” and to make up for lost time, employees were pushing the cows through the parlor without milking them.

Unfortunately, some producers can probably relate to this scenario. For one reason or another, the parlor gets behind, and employees scramble to get the last group of cows milked before the milking cycle starts again.

How can we fix this?

Why should we fix this?

No one likes to be rushed, cows or employees, but as herds grow in size, the balance between feeding, barn cleaning, herd health, and milking schedules becomes more complicated. As this all takes place, we try to maximize the number of cows that are milked in the parlor in the same 24-hour day.

What’s the impact of the “parlor push approach” to milking on cow health and employee performance? Should our metrics of milking center success be solely based on parlor efficiency?

In the April 25, 2021, article “Time to get a grip — Maximizing parlor performance could go too far” on page 248, we talked about how inadequate premilking procedures, especially inadequate teat stimulation, can actually lead to reduced milking efficiency, which was measured by more cows with bimodal milk letdown. In this article, we’ll discuss the impact that bimodal milk letdown has on not just the cows, but also the employees.

If a cow is ready to milk when a unit is attached, her teats are full of milk and “plump,” filling the space between the inside liner wall of the liner and outside of the teat. However, during bimodal letdown, milk quickly empties from the teats, leaving the teat “deflated,” which creates an air space between the teat and liner, allowing vacuum to fill the space. Thus, the teats are exposed to high levels of vacuum for 45 to 60 seconds, or even longer.

This is bad for the teats and for the cow on several levels. High vacuum causes poor blood flow (or blood congestion), swelling, and constriction of the teat canal, all of which combine to reduce the milk flow.

Think of wrapping a tight rubber band around your finger. You might not mind it for a few seconds, but what about 30 seconds? A minute? The same goes for a cow’s teats under high vacuum. She’ll show her discomfort by stepping, kicking off the milking cluster, or may even vocalize.

Perhaps surprising to some, cows with bimodal letdown don’t have milking units attached any longer than herdmates who have normal milk letdown. For bimodal cows, what does poor milk flow plus equal milking time add up to?

If the delay in letdown is about 30 seconds to a minute, milk yield at that milking alone diminishes by 3 pounds. If the delay is over a minute, it is reduced by 7 pounds. The longer the teats are exposed to high vacuum during low milk flow, the more milk is lost, and more cows with bimodal letdown in your herd leads to greater losses to your bottom line.

What effect does the “parlor push” have on employees? For starters, it makes their job more difficult — and dangerous. Preparing and milking cows that find milking to be painful makes a difficult job even worse.

Frustration is typical as employees have to avoid dancing feet and reattach kicked-off units, let alone deal with the extra time that is demanded of them while they try to stay on schedule. Also, under these conditions, employees often reattach units when cows are done milking, or they set cluster removal to manual, which can lead to overmilking, further exposing the teats to high vacuum.

It’s time to rethink our priorities in the milking parlor. Although there is a never-ending need to improve parlor efficiency, like many things in life, there is a balance between maximum and optimum. Herds should not sacrifice the health and welfare of the cows and employee performance for the sake of maximizing the cows per hour through the parlor. Improving cow comfort and employee work environment, while enhancing milk production, could be a win for the producer as well as the herd.

So, how are your cows milking? It doesn’t take a lot of equipment — by using your eyes and ears and spending time in the parlor, you might get clues if bimodal letdown and high vacuum are an issue on your farm. Watch milk letdown in the cluster after units are attached. Does the flow stay consistent, or does it stop a few seconds after the unit is attached? How about when the units come off — are teats discolored, purple, or have rings? Do teat ends look rough?

If you’re answering yes to these questions, evaluation of your milking routine may be in order. Does your routine have enough stimulation time for good milk letdown? If not, it may be time to get a better grip.

It’s all in the flow
Milk Quality
Related to:
milk quality
In Milk Quality

It’s all in the flow
By Rhyannon Moore, Michigan State University

Milk Quality
Time to get a grip
comments powered by Disqus