One birth at a time

The more we learn about dairy cattle behavior, the better off our calves will be. 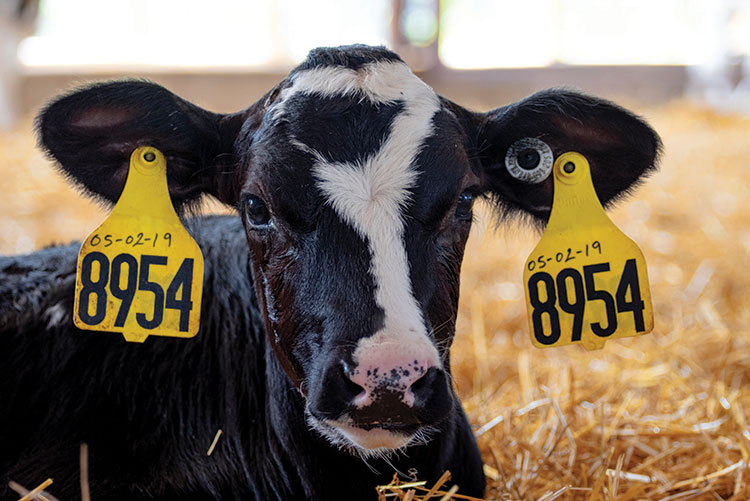 Most farms are quick to separate calves from their dams after birth, but some research shows potential benefits to leaving the pair together longer when possible.

Everything on a dairy farm begins with a calf. For that reason, in this article we will explore cow-calf research that was presented at the International Society of Applied Ethology (ISAE) annual meeting.

This may sound like the fancy title of an uptown meeting in the ritzy side of New York, but in reality, every year ISAE attracts animal behavior and animal welfare scientists from around the world to share their recent work on many species in production systems.

This year, in the quaint fishing town of Bergen, Norway, scientists and industry representatives alike learned about the most innovative animal behavior research. Our goal was to take some of the most relevant research presented and share it with those who can directly apply it into their management approaches.

Since most cows give birth once per year, calving is a common event on dairy farms. However, we know relatively little about what cows might desire in their calving environment. Due to this challenge, a calving management workshop was organized as part of the meeting for researchers to address what dairy cows want at calving. A few noteworthy issues emerged from the discussion.

Cows are herd animals, but they seek separation from their herdmates as calving approaches. Individual maternity pens have become a popular option to reduce disturbances during labor, but this may leave cows feeling exposed to a variety of risks in their environment. Work from the University of British Columbia in Canada and Aarhus University in Denmark found that cows in individual pens preferred calving in sheltered areas. However, applying these results to group maternity pens may be difficult.

Depending on pen size and number of cows in a group pen, cows may have difficulty finding seclusion prior to calving. A series of studies conducted at Aarhus University attempted to create seclusion in group pens by providing various levels of physical cover. Cows preferred calving in shelters with smaller openings, suggesting they wanted more coverage. However, when shelters were equipped with a self-locking gate, allowing one cow access at a time, the preference for calving in a shelter rose for dominant cows only.

This difference in calving preference suggests that reducing a cow’s personal space in a pen could limit its ability to choose a desirable calving site. From this collection of studies, we might consider that a “one-size-fits-all” approach to shelter installation does not work in group pens.

Observing cows on pasture can give us insight to preferences of cows in their “natural” environment. Another collaborative study between the University of Tennessee, The Ohio State University, and Miner Institute provided group-housed cows access to a barn and small pasture to determine calving preferences. Cows preferred calving in the barn or at the furthest end of the pasture.

Calving site varied with parity. First-calf heifers preferred calving furthest from the barn, in natural forage, while mature cows preferred the barn, closest to feed. For these animals, parity was a driving factor when choosing a calving site.

The key to an ideal calving environment may be creating multiple options and giving cows the opportunity to choose. Parity, dominance, and environmental differences can all contribute to preferred calving sites, resulting in individual variation. Maternity pen design should be considered within a dairy’s facility’s layout and adapted to fit individual needs of the herd.

Many European dairies allow cows to raise their calves for three months (cow-calf) as opposed to immediate calf removal (conventional). European farms cite switching to cow-calf groups due to growing consumer pressure to allow the calf access to the dam. For simplicity in this article, only cow-calf research that allowed the calf to nurse its dam for three months and was compared to conventional practice are discussed.

Surprisingly, reproduction was not different from conventional groups and culling rates for fertility were similar. However, lower milk production was evident in the cow-calf group throughout the cow’s lactation, yet milk protein remained higher.

Although fertility was not affected for cow-calf grouping, larger sample sizes may be needed. This research suggests fluid milk production may be affected long after the calf is weaned, but this lag effect is not well understood.

Compared to conventional practice, cow-calf groups had lower diarrhea prevalence in the summer and lower Bovine Respiratory Disease (BRD) prevalence in the fall. However, calf mortality was similar between groups. Contrary to what was expected, cow-calf grouping may actually improve calf health during “flu” season for diarrhea and bovine respiratory disease in calves.

Cow side effects and calf health are both important rationales for the conventional practice of calf removal. However, many farms also use this conventional practice to strengthen the human-calf bond. The University of Austria assessed if cow-calf groups had higher human avoidance distances as calves, heifers, and mature cows than conventionally raised calves.

An avoidance distance test is the amount of distance a cow travels to avoid an unknown person in a familiar environment within a certain amount of time. Large avoidance distances are generally associated with inappropriate cattle handling practices (yelling, hitting, and so forth).

In the Austrian study, cow-calf groups had higher avoidance distances as calves and as heifers, but there were no differences as milk cows. One possible explanation is cow-calf groups handled appropriately over time become acclimated to human presence. However, it is also possible that a human-calf bond preweaning is simply not required to acclimate the calf to milking as a cow.

Cow-calf relationship research is a buzzing topic in Europe. Cow fertility, calf health, and cow avoidance of humans many not be as negatively affected by cow-calf groups as once thought, but milk production is reduced even after a calf weans. Although our current freestall systems require modification to accommodate cow-calf pairs, perhaps we should be open to the concept of researching whether cow-calf groups can work on dairy farms in the future.

Off to a good start

Regardless of when calves are separated from their dams, calf care strategies are critical to promote calf welfare. After separation, calves must be managed effectively to help them grow, develop, and be bred at the correct time. Insufficient care can lead to negative health, behavioral, and production results.

If calves are immediately separated from their dams, producers have an initial challenge: feeding colostrum. Because some calves do not have the suckling reflex immediately after birth, producers may feed newborn calves with an esophageal tube. Although esophageal tube feeding ensures that calves receive high-quality colostrum quickly, this method can be difficult to perform without the calf responding negatively.

Researchers from the Swedish University of Agricultural Sciences and the University of Bern in Switzerland assessed calves’ stress response using cortisol, vocalizations, and struggling when fed by esophageal tube compared to bottle feeding. Regardless of feeding style, passive transfer success rate was equal and cortisol levels rose during their first feeding.

Bottle-fed calves were less likely to make vocal sounds than calves fed with an esophageal tube, but they were just as likely to struggle. These results suggest bottle feeding calves is as effective as esophageal tube feeding while providing calves with their first meal with as little stress as possible.

Finally, producers have a third challenge: Managing calves to achieve lower mortality rates. Researchers from the Norwegian Veterinary Institute and the Norwegian University of Life Sciences evaluated 912 herds for welfare criteria including sick calves, feeding, bedding, housing, mortality, water access, and colostrum feeding routines. Average mortality rate was 8 percent, but it ranged from 0 to 14 percent. Factors including type of milk fed (milk replacer or whole milk), number of daily feedings, and milk quantities fed per day were not related to calf mortality rate.

When herd size increased and herds were housed in tie stall barns rather than freestall barns, calf mortality rate declined. This may be due to the fact that as herd size grows, the number of staff also goes up, giving producers more time to check on their calves. Also, when cows are housed in tie stalls, producers are more likely to give each animal personalized attention, which could translate to calf management style.

Farms that allowed unlimited access to water had lower calf mortality rates. Unlimited water ensures that calves stay hydrated and lowers the risk of dehydration associated with scours. Providing water to calves is an easy management factor to incorporate to potentially lower calf mortality on farm.

Calves are the future of your dairy herd. Use knowledge and research about animal behavior to create an environment where calves can thrive, even before they are born.