Can we reduce mastitis? 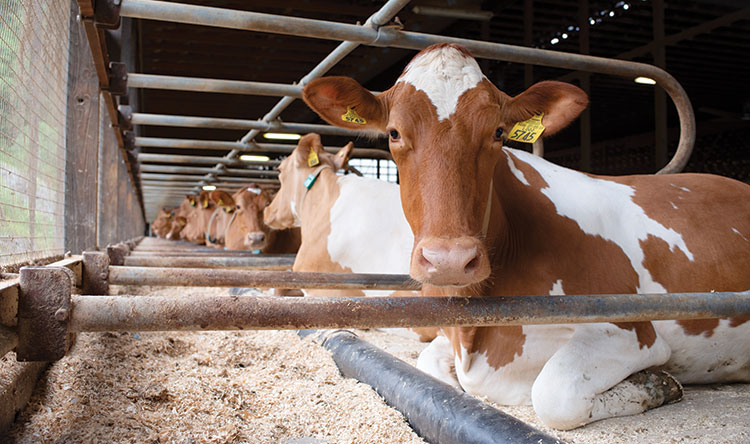 Bedding with high bacteria counts is generally associated with more intramammary infections.
Bedding and towels both play a critical role in milk quality and the potential need for antibiotic intervention to treat infections. University of Minnesota College of Veterinary Medicine researchers set out to learn if certain bedding types or towel cleaning practices elevate or lower the risk for mastitis.

To perform the largest survey of intramammary infection in cows approaching dry-off in the U.S., the study worked with 80 herds from 10 states. The four bedding types sampled were manure solids, organic non-manure, new sand, and recycled sand.

After each herd was visited twice for sampling, researchers collected milk samples from 20 cows. They also collected samples of both unused and used bedding.

In contrast, the association between counts of bacteria in used bedding and intramammary infection varied by bedding material type.

“We know from previous studies that bedding does impact udder health,” said Sandra Godden, D.V.M., one of the study’s authors and a University of Minnesota professor.

“In this study, the bedding didn’t have as much of an impact on udders because we were testing a special population approaching dry-off,” she said. “Most mastitis cases are in early or peak lactation, and at this point, those cows have gotten better or left the herd. If we sampled quarters at a different lactation point, we may have seen more infection and a stronger bedding effect.”

What about the towels?

Out of the 12 cloth udder towel management practices evaluated, specifically one — the failure to use a hot air dryer — was identified as a clear risk for a high towel bacteria count.

The study findings also suggest that cloth udder towels may act as a carrier for non-aureus Staphylococcus and Streptococcus-like organisms. The researchers recommend that herds aim to keep counts of Staphylococcus and Streptococcus-like organisms in cloth udder towels below 32 colony forming units per square centimeter (cfu/cm2) or five colony forming units per square inch (cfu/in2), and that laundered towels be completely dried in a hot air dryer.

“One would think it should be obvious that laundering and hot-air drying of towels would be an important path to reduce infections, but there’s been almost no science behind it. Even though we’ve known this in our gut, this is the first study to scientifically demonstrate this relationship,” Godden said.

Out of these studies, farmers can draw clear conclusions applicable to their own operations.

“Our first study reinforces the message we need to make sure cows are on clean bedding to reduce prevalence of infection during dry-off,” Godden said. “As for the towel study, the message is that clean towels matter. And we now have a better understanding of the importance of good laundering and hot-air drying practices.”

The study results may also impact antibiotic use on farms.

“One of our research focus areas is identifying opportunities to reduce antibiotic use by selectively treating dry cows,” Godden said. “Eighty percent of U.S. herds still practice blanket antibiotic treatment at dry-off. But our herds are doing much better by adopting practices to reduce prevalence of infection at dry-off. With reduced prevalence of infection at dry-off, blanket dry cow therapy may no longer be necessary in many herds.”

Of course, the economics for bedding and cloth towel management always is a factor in decision-making.

“We must tie in an economic component, because when you’re making any management changes on a farm, it can sometimes get expensive,” Godden said. “Improved udder health is always good, but we also need to know the return on investment (ROI) before adopting any new technology.”

It’s all in the flow
By Carla Wardin, Michigan dairy farmer