They pulled haylage from their rations 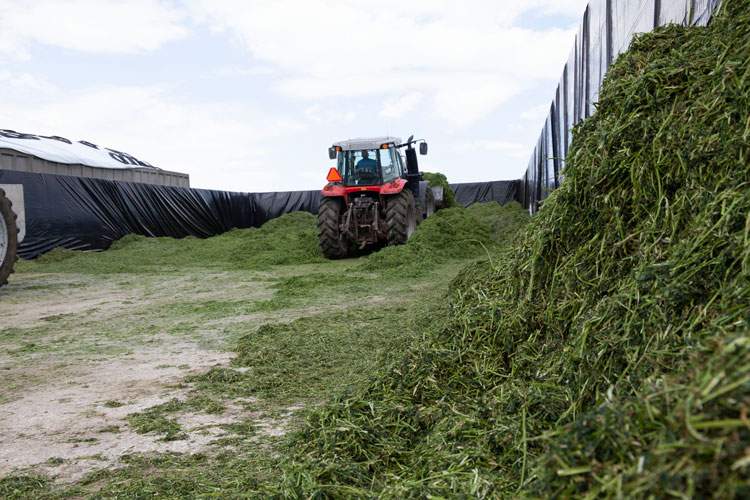 Alfalfa production in the Upper Midwest the last several years has been incredibly difficult. In the fields, winterkill and wet soils frustrated harvests and left fields in poor condition. Part of two Wisconsin farms’ responses to the weather and changing feeding culture was pulling some or all haylage from their rations.

“We knew soil moistures were so saturated, and it was going to be delayed by the time we got planting. So, we started looking at what was our forage inventory on hand, and on April 1, 2019, we had nine months of corn silage on hand and about 3.5 months of haylage inventory,” dairyman Brian Schaal explained during the Professional Dairy Producers of Wisconsin online conference.

Schaal Dairy Farm in Burlington, Wis., only reduced haylage slightly in order to extend its forage inventory. Corn silage levels were increased from 42% of the ration to 45% of the ration. Haylage was dropped from 22% of the total mixed ration (TMR) to 18 % of the ration.

Throughout the year, the Wisconsin farmer pays close attention to feed inventories and optimization of the ration to meet the ingredients available. “Everyone needs to come up with a plan of what works best for their farm,” he emphasized.

Financially optimized
Second Look Holsteins of Eden, Wis., made the switch to a strictly corn silage-based diet for a different reason. They made the transition over the course of three years.

“I had always had this idea of doing a high corn silage diet and eliminating haylage,” owner Corey Hodorff explained. “Before this, all of our consultants and people we worked with said we had to have alfalfa in the rotation to eliminate runoff and so forth.”

When Clint Hodorff came back to the farm, he brought the agronomy expertise to make changes in the cropping system.

“The first obstacle was that we needed to get everyone on our team bought into this concept, including our nutritionist, our vet, and our harvester,” Corey said. “Everyone needed to be on-board from all the way.”

They moved from 6 to 8 pounds of haylage per day to none. They raised the amount of corn silage in their ration and introduced wheat straw. Depending on availability, they have also used oat hulls and gin trash.

“Our main driver was savings on harvesting and ration costs,” Corey detailed. “We can save passes across the field, fuel, labor, equipment time, and should be able to make a more cost-effective ration because of those.”

They’ve calculated that they save more than 25 cents per cow per day by switching. Corey shared that they also found their ration to be more consistent since they aren’t introducing new cuttings of haylage every so often.

On the agronomy side, higher corn silage yield per acre opened up other farm acres for additional income. Subsequent to their transition, the farm introduced less tilling to their cropping processes.