Prepare your herd to weather the winter 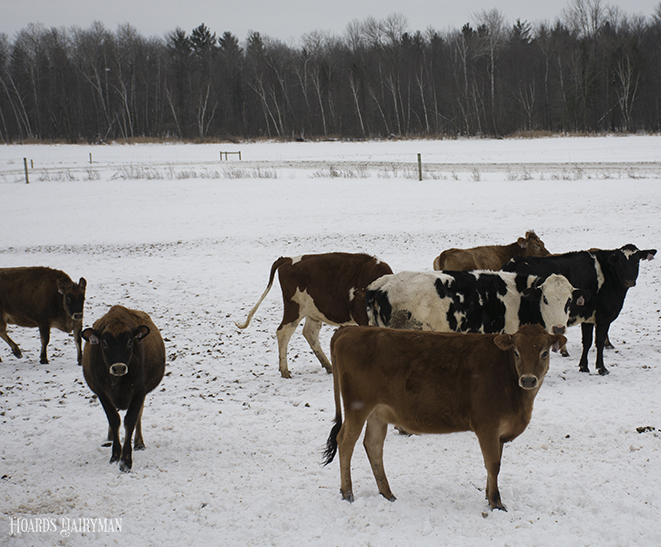 Now that the calendar has been flipped to December, it’s a clear sign that winter weather is quickly approaching. In an I-29 Moo University Podcast, University of Minnesota Extension’s Jim Salfer and Iowa State University Extension’s Jennifer Bentley discussed ways farms can prepare for the changing season, especially in colder climates.

While many farms may use shavings or sand as bedding for calves in the summer, Salfer asked farms to reconsider their bedding choice for winter. “The preferred source of bedding is straw, and lots of it, so calves can nestle down, especially when it gets really cold,” Salfer said.

Bentley agreed, and said she considers 50°F to be the cut off where calves start to need more energy to maintain body weight. As temperatures dip much colder than that in the winter, “It’s really a tough time of the year to get calves to grow,” she said.

“Calf jackets should be standard operating procedure as you get farther north,” commented Salfer. He also shared that many farms will feed more milk to calves this time of the year.

Bentley said that while some farms increase volume of milk or solids, supplemental fat added to milk replacer is also an option. She encouraged farms to do that early enough, though, before freezing temperatures settle in. “You don’t want to add the fat the day that it’s cold. Calves need time to build up energy reserves with that fat,” she said.

She also touched on additional feedings. “One advantage farms with autofeeder systems have is that they can feed multiple times per day,” she said. “Conventional farms, where we are used to feeding two times a day, really have to strategically plan how they are going to get that third feeding in.”

Providing calves with drinking water remains important, but it is more difficult to maintain when it is below freezing outside. Salfer recognizes the challenges that come with frozen water in pails. His recommendation is to give the calves a little warm water after the milk feeding is complete, leave it in their pails for half an hour while washing up bottles, bedding, or doing other chores, and then go around and empty out the pails before they freeze.

“Think about a good way in your system that you can give them water but not make it so much work that you won’t do it anymore,” he said.

When making any changes to the ration or feeding protocols, Salfer said to pick a date to switch to your winter feeding program and stay with that all winter. Changing back and forth between programs “is really hard on your animals long term,” he said.

As for heifers, Salfer said they can handle cold weather, especially as they get older, but when it is really frigid, they won’t grow as well. He said to visit with your nutritionist and up the energy levels in their diets, especially if the winter is particularly cold. He said that animals will compensate for cold weather by eating more, but when it’s really cold, they can’t compensate enough.

“Watch body condition scores and adjust the diet accordingly,” he said and suggested adding a couple of extra pounds of corn or corn silage in the ration. “They are going to use more energy to maintain body temperature.” Bentley also noted the importance of keeping animals dry as a way to help them handle cold temperatures.

When it comes to cows, Salfer said that bedding doesn’t have to change a lot, but if using minimal bedding on mattresses, you should consider adding more.

“High-producing cows can leak in those beds,” he said. “If there’s leaked milk in the stalls, and cows lie down, they are much more likely to freeze their teats than if there’s a nice, dry surface.”

He said some farms will change to a winter teat dip formula with an emollient to keep teat skin from chapping. While some farms may skip dipping all together in extremely cold weather, that practice makes Salfer really nervous.

“Try not to do that long term (more than a day or two), especially if you have any contagious organisms on your farm,” he said.

The ultimate goal is to keep animals growing and producing all year long. “Clean, dry, and draft free goes an awful long way in keeping animals healthy and performing well in the winter,” Salfer said.

“Ferment” and “grind” are the corn buzzwords
By Abby Bauer, Senior Associate Editor