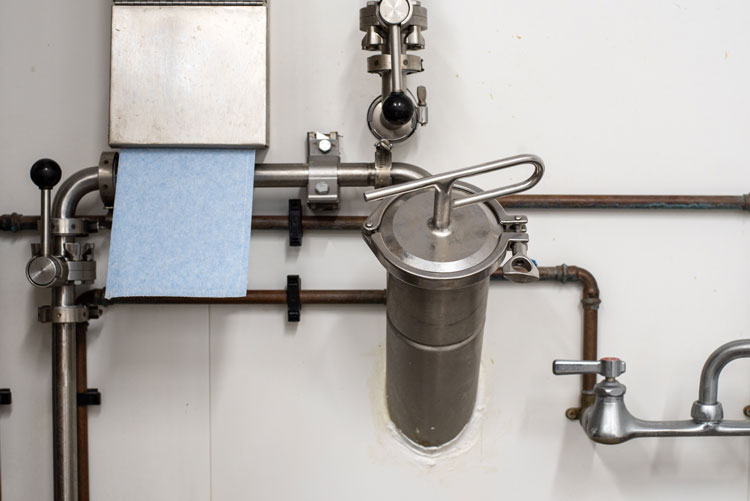 “We always say prevention is key to milk quality,” said Penn State Extension educator Greg Strait. “We try to help cure the problem . . . but we want to prevent that problem when we arrive on the farm.” In order to help with prevention, farmers need to address cleanliness practices in both barns and parlors.

Strait said when he goes on farm visits, his first stop is always at the milk filter. A dirty filter tells him a lot about the dairy’s practices.

“If we have filters like this, what is actually the problem?” asked Strait, showing an image of a dirty milk filter.

“Preparation of the cow, cleanliness of freestalls, cleanliness of bedded pack . . . you name it . . . that’s a telltale sign of how they’re doing in their facility,” Strait said during “Tips and Practices to Optimize Milk Quality” by Penn State Extension. “It doesn’t matter if you’re milking one cow or thousands of cows, that milk filter tells a lot.”

Along with dry bedding and consistent manure removal, dipping is also a big factor in milk quality. Strait recalled visiting a farm that was having issues where the dairyman was using the same bucket of iodine water and a sponge to prepare cows for milking. Strait recommends using foamers as a standard practice.

Teat dips really matter
Strait stressed that attention needs to be paid during both predip and postdip, because in order to be most effective, three-fourths of the teat should be completely covered.

“We always do a paper towel test . . . a simple test. Once they dip the teat, take the paper towel, go around the teat, and it should be wet side to side, and no dry in the middle,” he said.

Farmers still have easy and inexpensive ways to improve cleanliness. For instance, something as simple as wearing new gloves helps.

Using individual cow information gleaned from testing and culturing are always ways to detect and prevent larger issues. Mas-D-Tec is an electronic, handheld tool that detects mastitis, and the California Mastitis Test (CMT) paddle can help with diagnosis, too.

“We always want them to use (the CMT paddle) three to four days after freshening, because that’s when we can find out what’s going on with the cow and get it treated if needed,” he said.