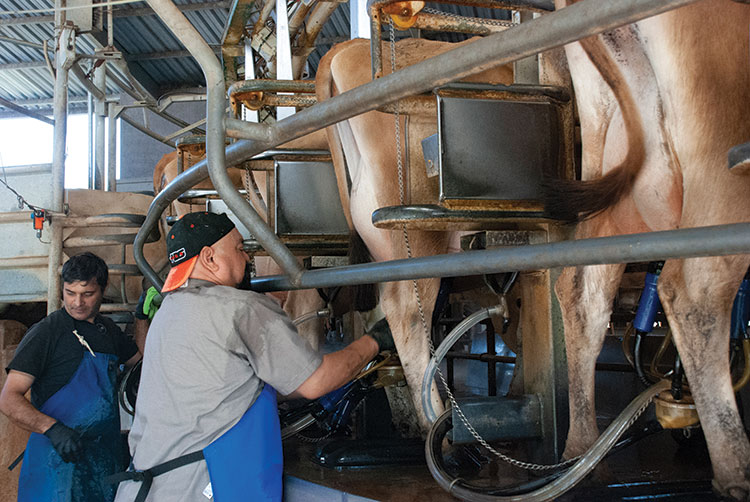 Dairy owners must balance employee needs with running a profitable business that provides jobs for the community.

Whether your dairy farm is staffed entirely by family, brings in a few outside workers, or employs dozens of people, providing a safe, desirable work environment is key to making sure you have people to complete the tasks of producing milk.

Despite the advances in areas such as safety, automation, and health benefits that have made dairies better places to work, farmers still struggle to hire a reliable workforce. At its core, dairy farming consists of irregularly long hours and tough jobs, making it a less-than-desirable workplace for many people.

Now compounding the issue of finding labor is the rising number of states establishing labor laws that are stricter than federal standards, often resulting in higher minimum wages and overtime restrictions. Four top-10 dairy states are among those leading the charge in labor adjustments — California, New York, Minnesota, and Washington — and these states could be setting a precedent for other states to follow, too.

A patchwork of standards

Federal labor laws that established the 40-hour work week, restrictions on child labor, and authorization of worker unions were passed in the wake of the Great Depression. The purposes of the National Labor Relations Act and Fair Labor Standards Act were to protect workers and force employers to create more jobs at a time when many people were unemployed.

However, those laws exempted agricultural workers. Richard Stup, an agricultural workforce specialist with Cornell Cooperative Extension, explained why on an episode of Hoard’s Dairyman DairyLivestream.

“Congress passed these laws after compromises led by rural and Southern states to carve out farm labor from the new labor rules,” he said. “Subsequently, state legislatures throughout the country also recognized that farm jobs were different from other jobs, and they created similar carve outs from state labor laws to treat farm labor differently from most other industries.”

The vast majority of state labor laws mirror these federal laws, including exemptions for agricultural labor. Even just last month, the Virginia Senate killed a bill that would have removed exemptions for ag workers and made them eligible for minimum wage, which will be stepped up to $15 in the state by 2026. But Stup pointed out that if an individual state decides to enact laws that are stricter than the federal standards, that is what must be followed.

“When there are differences, whichever law is most restrictive, or protective, depending on your point of view, is the law that operates for you,” he described.

Overtime on the farm

“Today, we find states in various places across the country making changes to their laws that affect farm employees,” Stup said, citing New York as one example. Although the federal minimum wage is still $7.25, dairy farmers in New York must pay $12.50 since their state minimum wage is higher.

Additionally, labor laws for New York farm workers that went into effect at the beginning of 2020 require a weekly day of rest, authorize farm unions, and set overtime restrictions.

Overtime has seen the most attention from farm labor law changes, with at least five states setting standards for work week limits. New York’s law requires employers to pay time-and-a-half for any hours worked past 60 in a week. Minnesota and Maryland also have work week limits for agricultural laborers.

In California, farm laborers are on track to get to a 40-hour work week. The phase-in program that began in 2019 for employers with more than 26 employees accelerated as of January 1, 2021, with farms now required to pay overtime for more than 45 hours in a week or eight and half hours in a day. Next year, that will drop to 40 hours a week or 8 hours in a day. For farms with fewer than 26 employees, the 40-hour work week will be implemented in 2025, and the phase-in period begins in 2022 at 55 weekly hours.

This past November, the supreme court in Washington state narrowly ruled in a 5-to-4 vote that dairy workers there are entitled to overtime pay after working 40 hours in a week, making it the first state to grant overtime through the courts. Now, lawyers in the state are even bringing up lawsuits to make farmers pay up to three years of retroactive overtime wages.

A cost to everything

Why are these labor battles coming up now?

Calls for justice and fairness in employment were growing even before the COVID-19 pandemic highlighted working conditions many people would not usually have thought about, Stup noted. Social media and online transparency have made these stories even easier to find. Additionally, worker advocacy groups and unions see the need to move farm labor into line with the rest of the economy.

Farmers, though, are the ones who must find a balance between meeting labor standards and running their business. Frank Cardoza has experienced that firsthand in managing his California dairy, where those overtime guidelines continue to stack up.

“Every January 1, you have to decide what changes you’re going to make to be successful in this industry,” he said. “What’s really complex about it is the dairyman is in the middle. We’ve got to take care of the cows, but we also have laws to protect people.”

Cardoza believes the advances made in labor have been good ones, just as improvements have been made in animal welfare over the last decades. However, what he wants to provide for his employees and what he can provide don’t always match up.

“There’s a cost to that, but when the dairyman gets his or her milk check, it’s not there. We’re always talking about how we can make things better for the public, but somewhere along the way, the dairyman has to get compensated for that as well,” Cardoza said.

On that point, Stup described that in the labor battles in New York, worker advocacy groups don’t consider the economic argument to be a legitimate part of the discussion “It’s simply a justice issue,” he said. “For them, economics simply do not matter.”

But of course, economics do matter. Without a business that can be profitable, those jobs won’t exist for anyone. Even the jobs that farms have now are struggling to get filled.

The Bureau of Labor Statistics reports that the labor participation rate, which defines the proportion of working-age Americans who have a job or are actively looking for one, is at its lowest level since the 1970s. At the same time, unemployment remains elevated due to the pandemic.

While these agricultural labor changes are concentrated in a few states for now, the discussions around employee rights are not likely to go away. The best option for farm managers is to be informed and have a plan, advised Cornell University economist Chris Wolf.

He added that the key is to drive the conversation and not be driven by it. Labor rights is another topic the industry must stay on top of in order to have its voice heard. That will be evident in industry leadership like the FARM Workforce Development program and, most importantly, the steps taken on farms every day to provide quality working conditions and benefits.

Straw is the farm’s multi-tool
Nutrition
Related to:
features, employees
In Features