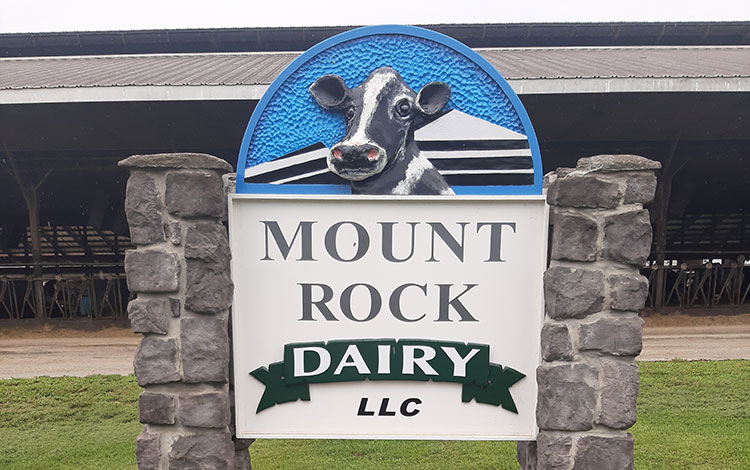 When Alan Waybright decided to venture out on his own to dairy farm, he purchased a farm in Newville, Pa., and Mount Rock Dairy was established in February 2019. Prior to moving his cows to their new home, he made a few fairly modest changes to the facilities that paid back quickly. He shared his most beneficial modifications during a Center for Dairy Excellence Cow-side Conversations podcast.

Waybright had 10 days to prepare the facility before his cows would arrive, and he said one of his top goals was to enhance cow comfort and cooling. The barns had a good heat abatement system in place, and the freestalls were already appropriately sized, with a width of 48 inches and a length of 7.5 feet in the head-to-head stalls. However, the barn had previously housed Jerseys, so the neck rails were placed at 64 inches. His crew moved them all the way forward, to 68 inches, to accommodate his Holstein and crossbred herd.

Some of the barns had concrete brisket boards in the stalls, and Waybright hired a contractor to remove them. Also, the design of one barn required cows to walk the length of 60 stalls to get to an alley, so he removed a few stalls to provide an additional cross-over alley.

For greater cow comfort, Waybright converted the stalls, which contained rubber mattresses, into deep-bedded stalls by adding a 2-by-4 to the back curb. The stalls are filled with manure solids and topdressed with lime twice a week, which Waybright says helps control somatic cell count and mastitis issues.

Between materials and labor, Waybright’s initial investment during that 10-day period was $18,000. “That paid back by the end of the first year, easily,” he said.

Over the course of three weeks, Waybright’s cows were moved into the newly purchased facility. “The cows took it really well,” he said. There were only three cows that needed to be culled after the initial move.

At that time of the move, the herd’s average production was in the low 80 pounds per cow range. Today, they are averaging 92 pounds of milk, with 4% fat and 3.1% protein. The somatic cell count for the 850-cow herd has been 100,000 for the past two years, which is lower than their average in the previous facility.

Waybright believes better airflow in these barns help dry out the manure solids more quickly, which contributes to the reduction in somatic cell count. He said the application of lime to the stalls also keeps the bacteria level down as much as possible.

Another component of Waybright’s success comes in the form of his advisory team.

“I am the only senior manager, the only partner here, so I thought it as important to have an advisory team because I did have areas of inexperience, especially in nutrition,” he explained.

He also wanted to be able to keep a close eye on how the dairy was doing financially. “Since I am not raising the crops, I am paying more for the forages than an operation growing their own feed,” he shared. “I knew right off the bat I needed to perform well or above average in other areas.” To reach his goals, Waybright works closely with his key advisers, including a veterinarian, nutritionist, lender, and accountant.