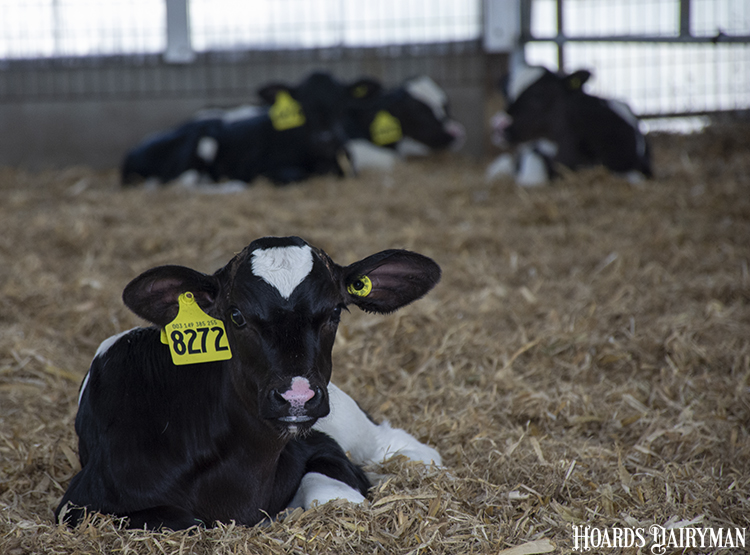 We’ve all seen it: An image of a dairy cow and calf, standing together in a pasture, on the label of a gallon of milk or another dairy product. Marketers use pictures like this because they know it resonates with the people buying milk. The hitch is that this image does not reflect reality on most dairy farms.

“That picture of a cow and calf together on pasture is not what the industry does,” said Nina von Kerserlingk, a professor at the University of British Columbia, during the June Hoard’s Dairyman webinar. “That is a risky place to be.”

Consumers want to know more about the farms that their food comes from, and as they learn more, they have more concerns. Outside of North America, von Keyserlingk said cow and calf separation after birth is one of the hottest discussion points. “People are asking questions about this,” she said.

An alternative to leaving a calf with its own dam is to raise calves in groups with a foster cow. von Keyserlingk said she gets many questions about this practice, which would give a calf the opportunity to drink as it pleases directly from a cow.

Although farmers are considering this as a possible middle ground solution, will it meet consumers’ expectations?

In a University of British Columbia study, 1,500 individuals were given some background information on calves and then asked their opinion on four calf rearing systems:

3. Raised with a foster cow

4. Raised with the dam in a cow-calf system

Before the study, von Keyserlingk said she expected participants to rank cow-calf systems first, foster cows second, pair housing third, and individual housing as the least favorable. However, that is not what they found.

Instead, on a 7-point scale ranging from strongly agree to strongly disagree, participants did rank the cow-calf system as most favorable, with a score of 4.9. The other three options, though, all received similar scores (from 2.7 to 2.9).

“It’s all about separation,” von Keyserlingk explained. “They hate the fact we are separating the cow and calf.” Based on these findings, she said she would not recommend putting money toward expensive research on how to make a foster cow system work, because it doesn’t fix the problem consumers have with calves being separated from their dams at birth.

She shared a parallel example in the poultry industry. In an attempt to counteract criticism over battery cages for laying hens, millions of dollars were spent on research looking into furnished or enriched cages, and many egg organizations around the world transitioned to enriched cages for housing.

While each bird has more space, they are still housed in cages, and that seems to be an issue.

“When was the last time you were in the grocery store when they talked about the eggs coming from an enriched cage?” she asked the audience. She said cartons are labeled as either “caged” or “free range” — there is nothing in between.

“We already see in Europe, bigger cages are just not acceptable by the public,” von Keyserlingk stated. “Millions of dollars were put into this research, and for what? For a system that never really resonated with the public.”

Her advice to the dairy industry is to come up with a strategic plan and a vision for the future. “This is something animal agriculture has to do, or someone is going to tell us what to do,” she said.

To hear more on this topic, watch the June Hoard’s Dairyman webinar, "Reimagining the future of dairy — Maintaining our social license by improving animal welfare.” The webinar was sponsored by the Dairy Cattle Welfare Council.