Can corn and alfalfa be companions? 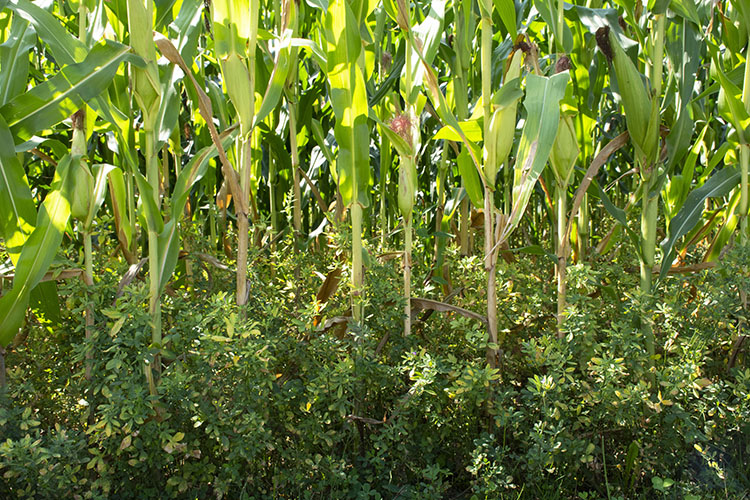 Many dairy farmers grow corn, alfalfa, or both to feed their herd. While both forage sources have benefits, they also have some limitations. That’s the reason USDA’s John Grabber and others are taking a closer look at interseeding alfalfa into corn for silage.

During a Beyond the Lakes Demonstration Farm Network and Manitowoc County Forage Council field day held at Libertyland Farms in Valders, Wis., Grabber explained that corn silage, while great for yield, leaves the land bare once it is harvested. In many areas, erosion and nutrient loss are issues that must be dealt with, and cover crops can be an effective solution.

On the alfalfa side, trying to establish fields in the spring results in low crop yields and lost money during the establishment year. Grabber said one possible way to skip those normal first year woes is to interseed alfalfa into corn. Once the corn is chopped for silage, the objective is that the alfalfa would be established and remain productive for the next few years.

To make this system work, Grabber, a research agronomist at the U.S. Dairy Forage Research Center, offered a few pieces of advice. For starters, he said to plant both crops at about the same time in the spring. “That allows the alfalfa to get a good start before it is heavily shaded by corn,” he explained. 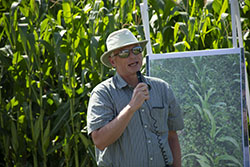 He also emphasized that in this system, corn is a companion crop. That means it can’t be planted at high populations or harvested late, and maximizing yield can’t be the goal. “You have to dial it back a bit to give the alfalfa a chance to survive,” he said. “Corn is the companion to alfalfa.”

For best results, he said to plant at a moderate population rate (30-inch rows with a final density of 26,000 to 32,000 plants per acre). Grabber also said to select a site that is good for growing alfalfa, with the correct soil pH and nutrient levels. Additionally, he reminded that alfalfa needs a firm, smooth seedbed to help seed get into the ground properly.

He recommended applying a full rate of nitrogen because the alfalfa will compete with the corn for that nutrient. Grabber also shared that agrichemicals applied mid-season have been found to aid in success of the alfalfa. In shaded conditions, alfalfa wants to grow tall and spindly, and it is also susceptible to foliar diseases.

“Spraying a growth retardant and fungicide can really help keep the alfalfa more compact, get good roots growing, and keep the canopy alive under the corn so it can harvest whatever light is there,” Grabber shared.

Corn harvest should be done as soon as possible, ideally in early or mid-September, to allow enough time for the alfalfa to recover before winter. Grabber advised against planting into wet soils that can easily be rutted, because even if a beautiful stand of alfalfa is established, tractor traffic at harvest may cause significant damage if wet conditions exist.

On the other hand, if it is a dry spring, Grabber would not recommend this practice. He said either the alfalfa won’t survive or it will compete with the corn for moisture, limiting the success of both crops.

Grabber said they will continue to investigate this concept with hopes that the alfalfa interseeded into corn is not just an expensive cover crop, but rather a productive forage source for the several years after the corn is harvested.

Even young farmers can use an estate plan
By Abby Bauer, Senior Associate Editor