In the U.S. today, roughly 5 percent to 10 percent of random source dairy replacements are infected with M. paratuberculosis.

Five experts arrived at a consensus opinion on the proper biosecurity practices to avoid purchase of cattle harboring a Mycobacterium paratuberculosis (cause of Johne's disease) infection. Their findings were published in the December 15, 2006, issue of the Journal of the American Veterinary Medical Association. For simplicity, the biosecurity plan is shown as a decision tree graphic below to the right.

The decision-making system involves a series of questions starting with, "Are USDA test-negative program herds available?" Purchasing from such herds clearly is the safest way to avoid bringing infected cattle into a herd. If such herds are not available as sources of dairy replacements, then five other options can be consecutively considered. They are listed in order of greater risk of buying infected cattle due to less and less objective test data from the herd of origin. The main message is that herd owners do have a choice. They can manage the risk of buying infected dairy replacement cattle.

Ideally, purchasing decisions should be based on laboratory test data from the herd where the cattle were born and raised. Herd owners should control their risk by having a biosecurity plan (see your veterinarian).

In the U.S. today, roughly 5 to 10 percent of random source dairy replacements are infected with M. paratuberculosis. That means between 1 in 10 and 1 in 20 purchased cattle will not perform as expected in terms of milk production and herd longevity. If you buy 100 random-source dairy replacements, there is a 95 percent chance that at least one is M. paratuberculosis-infected. Worse, depending on herd management practices, the infected replacements can infect calves born on your farm, destined to become replacements, thus amplifying your herd's Johne's disease problem. Purchasing an infected animal is not a "deal" at any price.

Are you in the registered cattle business?

Every registered cattle breeder should participate in a serious Johne's control program. Eradicating the disease is essential to their future success. Question is: How many are using proper biosecurity measures to avoid buying - and selling - Johne's infected cattle?

"Registered breeders should work to eradicate paratuberculosis from their herd using strategies that are more aggressive and consequently more expensive than those used for typical herds," says Dr. Mike Collins. "If you're marketing genetics, you should be controlling Johne's disease. Breeders have a moral and ethical obligation to sell livestock and germ plasma from disease-free animals."

Dave Kendall, current executive secretary of the American Milking Shorthorn Society, agrees. Kendall once worked with a group of heifers that broke with Johne's disease. "We thought we had a BVD outbreak in one of the heifer groups until we started to post them," explains Kendall. "The cultures sent to Iowa State University confirmed Johne's."

Kendell is keenly aware of the financial losses due to Johne's disease and "strongly believes that buyers must be aware of the potential problems of not knowing." He suggests buyers only purchase cattle from herds that have a comprehensive testing, management, and culling program for Johne's.

The American Guernsey Association takes it a step further in the sales they manage. Every animal over 20 months of age is ELISA blood-tested before arriving at the sale. In addition, results are published if the cattle have fecal test results. Seth Johnson, executive secretary of the Guernsey Association, states, "We have been successful in encouraging producers planning a herd dispersal to do fecal tests on the entire milking herd before the sale."

Plain and simple . . . registered breeders should buy from herds or cattle dealers who sell animals tested for the disease. Not such an easy task, though. Most breed associations, such as Holstein USA, offer this statement in their recommended terms and conditions at public sales: "No animal is warranted to be free of Johne's disease." Some cattle dealers also will have a similar statement printed on their ‘Bill of Sale' which they believe protects them from future litigation.

It is important to ask up front as to the status of the potential additions to your herd. If you are at a public sale or farm dispersal, ask the sale manager or consignor if they test for Johne's. Remember, you are only seeking information on potential purchases and not out to harm the seller. Do not be afraid to do your homework in advance. Some sellers will test on your behalf and expect you to pay the expense. Consider it a wise investment. Knowing that these additional cattle are not harboring the disease is one way to ensure that they can remain a vital part of your operation. 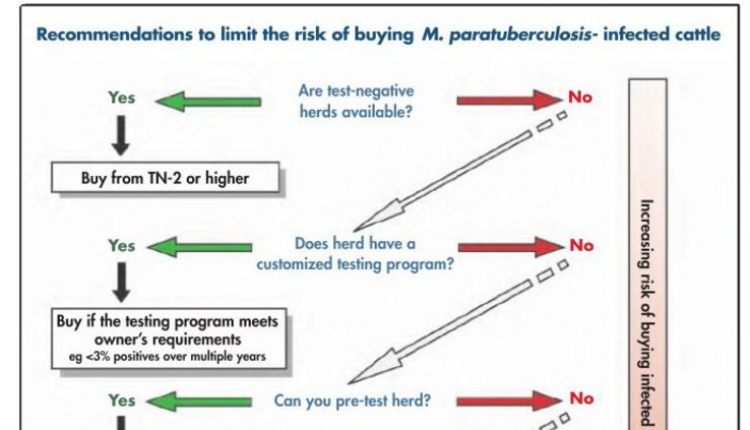 Click here to return to the Animal Care E-Sources
Related

The cow that couldn’t jump over the moon
HD Notebook
Related to:
animal care, Johnes
In Animal Care

Find the super-shedders in your barn
By Michael T. Collins, D.V.M., Ph.D.

Animal Care
What You Can Do? 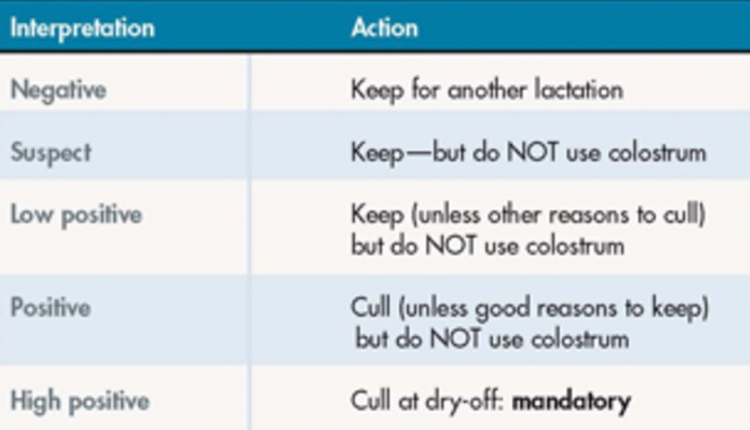 Animal Care
What is the best Johne's test?