Make the most of early heifer growth 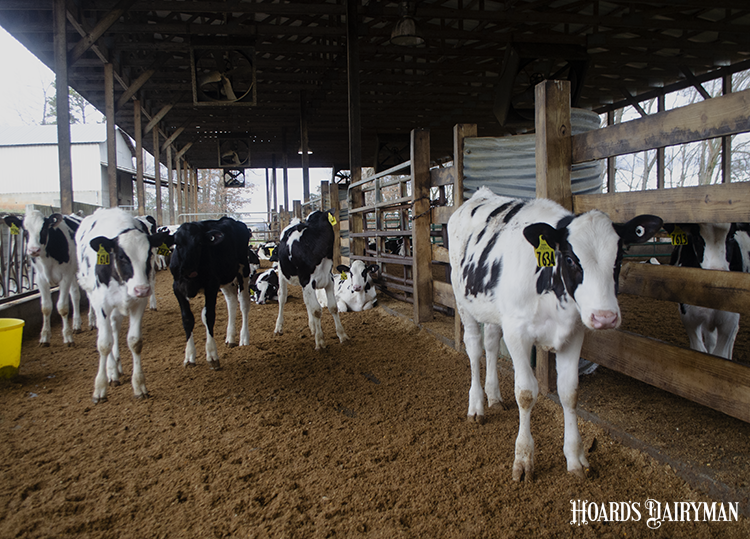 During a Cornell Cooperative Extension “Healthy, hard heifers” webinar, Hicks discussed how these goals can be achieved. One of the first keys is to determine the mature body weight of non-pregnant cows in the lactating herd and the average age at first calving.

“We have to know these numbers, or we can’t grow heifers effectively,” the area dairy management specialist said.

If an animal weighs 200 pounds at weaning and will calve in at 22 months of age, it needs to gain 1,075 pounds over 20 months. This would require 1.8 pounds of average daily gain, which Hicks said is achievable.

Understanding heifer growth patterns will help farms reach this target. Hicks explained that before puberty, heifers will use nutrients preferentially toward muscle and skeletal growth. After puberty, they use excess nutrients to deposit fat.

Prior to puberty, Hicks explained that heifers are very efficient to feed and get growth in return. She said feeding for 2.2 pounds of growth per day is attainable, and this early growth is preferential, not only for the cost, but also for all the other benefits received from early growth.

From puberty to breeding (heifers about 600 to 800 pounds), heifers are still efficiently transforming nutrients to frame and muscle. Excess nutrients, though, are starting to get pushed toward adipose deposition.

“Pay careful attention to the diet here,” Hicks advised. “You want a majority of 12-month-old heifers to have a body condition score of 3,” she noted.

Average daily gain during this time period can be cut back to 1.8 to 2 pounds per day, which will still maintain overall growth goals.

“I like feeding these heifers early on for a high rate of gain because it costs less, and you avoid playing catch up later when it costs more,” Hicks explained. “You save money doing it this way, and you have a better heifer in the end.”