The benefits of reduced-lignin alfalfa extend to the field with lengthened cutting schedules and greater yields.

By Hannah Wilson and Kenneth Kalscheur

The authors are research scientists with USDA’s Agricultural Research Service (ARS) and its Dairy Forage Research Center in Madison, Wis. 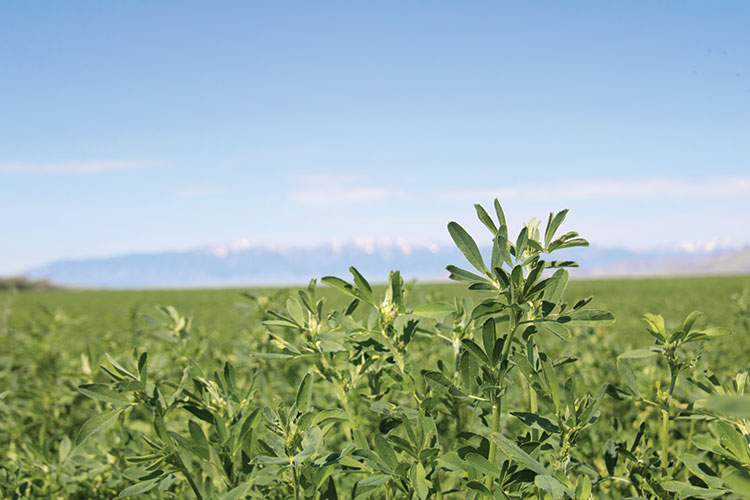 Reduced-lignin alfalfa varieties can lead to greater tonnage due to lengthened cutting schedules. This can take place without sacrificing forage quality.

Alfalfa is known for its high nutritional value, and that makes it a valued forage source. However, alfalfa is often hindered nutritionally because of the indigestible lignin components in the cell wall. Using technology to improve fiber digestibility in alfalfa can provide opportunities to improve feeding flexibility and enhance animal performance. Importantly, high-quality alfalfa can be used to improve cow efficiency, production, and enhance an operation’s economic value.

Alfalfa has a number of beneficial nutritional characteristics that make it a high-quality feedstuff for dairy cows. Alfalfa is sometimes overlooked or left out of the diet because of its high expense relative to other forages. This includes its high establishment and harvest costs. This situation has led to less overall alfalfa production in the United States in the last 20 years. Incomplete fiber digestion reduces animal performance by limiting intake, and that also cascades to more manure production. When that takes place, a dairy farm’s profit potential also drops.

Lignin provides strength and rigidity for the plant. However, it also leads to reduced digestibility as the concentration of lignin climbs with maturity. Lignin content can also be directly related to cell wall digestibility by forming cross-linkages with other cell wall components such as cellulose and hemicellulose, making the forage less digestible. Alfalfa leaves maintain high fiber digestibility throughout the growth cycle, while the stem material accumulates more lignin as the plant approaches full bloom.

Lignin is the focus

Alfalfa varieties with reduced-lignin content have achieved significantly greater fiber digestibility by, as the name suggests, reducing lignin in the plant cell wall. There are a few alfalfa varieties on the market that utilize different approaches to reduce lignin. One such specific variety, HarvXtra, uses a genetic modifier to down-regulate the production of lignin.

Additionally, breeding experts continue to focus on conventionally bred, reduced-lignin alfalfa. Another alfalfa variety, marketed under the name Hi-Gest, attempts to manipulate the leaf-to-stem ratio through conventional breeding methods. This variety improves digestibility by enhancing the percentage of leaves, which are more digestible, in proportion with less stems, reducing the overall content of lignin in the harvested forage.

Alfalfa has environmental and sustainability advantages when compared to corn silage, another popular forage source. However, because corn silage is harvested one time in the fall, it has a perceived economical advantage over alfalfa . . . a crop often cut three to five times in a season, thus requiring more labor and machinery costs. Under other scenarios, alfalfa is often cut more frequently, sacrificing yield, to maximize quality and improve fiber digestibility. Reduced-lignin alfalfa may offer an advantage to harvest management flexibility without having to sacrifice yield.

Another study reported no differences in yield or nutrient quality when the alfalfa was harvested at 28-day intervals. However, in the same study, extending harvest to a 35-day cutting interval led to greater yields while maintaining nutritional quality compared to a control alfalfa that sacrificed quality for greater yields. Ultimately, the HarvXtra alfalfa had a similar improvement in yield but a 12% to 15% advantage in digestibility.

The science of feeding

Improving the nutritive value of alfalfa, by enhancing fiber digestibility, often leads to improved milk production. This response is primarily because of greater intakes, regardless of whether it is a reduced-lignin variety or a conventional variety.

In this experiment, cows fed the late-harvested conventional alfalfa resulted in the poorest feed conversion efficiency. Because this alfalfa was likely of poorer quality, cows consumed more feed to meet energy requirements to produce milk. Greater digestibility for the early harvested reduced-lignin alfalfa allowed cows to eat more and produce more milk. However, cows were not as efficient as early harvested conventional alfalfa on a fat-corrected milk basis.

Fit for your operation