Set these goals for first-lactation cows 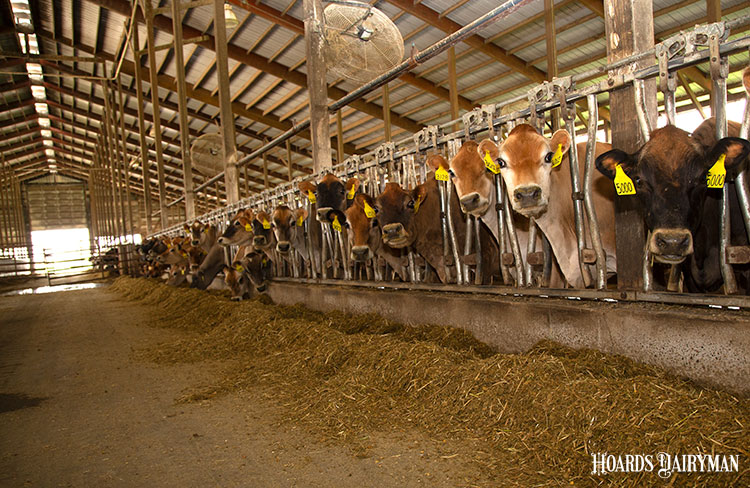 Calves and heifers that grow well and become productive cows is a target every dairy farm aims for. To reach this end goal, it is helpful to have benchmarks to work toward along the way.

In a Cornell University Extension “Healthy, hardy heifers” webinar, professor Mike Van Amburgh shared a few of those growth targets for dairy replacements. This includes doubling a calf’s bodyweight between birth and weaning and aiming to breed heifers when they are at 55% to 65% of mature body weight.

Then Van Amburgh narrowed in on the goal to calve heifers in at 82% of the herd’s average mature body weight. Why is this the ideal size? Van Amburgh explained that first lactation cows should achieve milk production levels equivalent to 80% of the mature cows in the herd. By reaching 82% of mature body weight by calving, he said animals will still grow through lactation, but the amount of energy needed for growth will be lower and they can still meet that milk yield goal.

“We want to calve them in at a body weight that will allow them to grow but not at a great expense to first lactation milk production,” Van Amburgh said. If first-calf heifers are averaging much more than 80% of the mature cows’ production, he said that is not a problem with the heifers but instead is an indicator that mature cows are not milking at the level they should be.

Van Amburgh noted the lack of data most farms have when it comes to heifers. “If we don’t measure something, it’s hard to make corrections if not you are not achieving the right amount of milk,” he said. “Look at mature cows in your herd, because each herd is different,” he added.

Mature weight is determined at the middle of the third or fourth lactation, when healthy cows are 80 to 200 days in milk. Van Amburgh said that this group gives a good reference of where a farm’s heifers need to end up. If weighing animals on a scale is not an option, he said that weight tapes are a good alternative.

The targets for weight at calving will continue to change because cow size is shifting. Van Amburgh shared that in 1993, the average mature cow on Cornell’s research dairy weighed 1,472 pounds. In 2016, that number had risen to 1,770 pounds in a herd that is simply bred for good feet and legs, udder confirmation, and milk production.

“An unintended consequence of selecting for milk is that we end up with a machine that is a little larger,” Van Amburgh noted.

This means old recommendations don’t work, and it also re-emphasizes the importance of collecting herd level data. Just as there is no standard mature body weight for humans, there is no standard body size for dairy cows. However, determining the average body weight in an individual herd and striving to hit the desired benchmarks is worth it, even though it will take work.

“Getting them to the right size at calving is an opportunity,” Van Amburgh summarized.