Dairy has a bright future

The author is the managing editor of Hoard’s Dairyman. 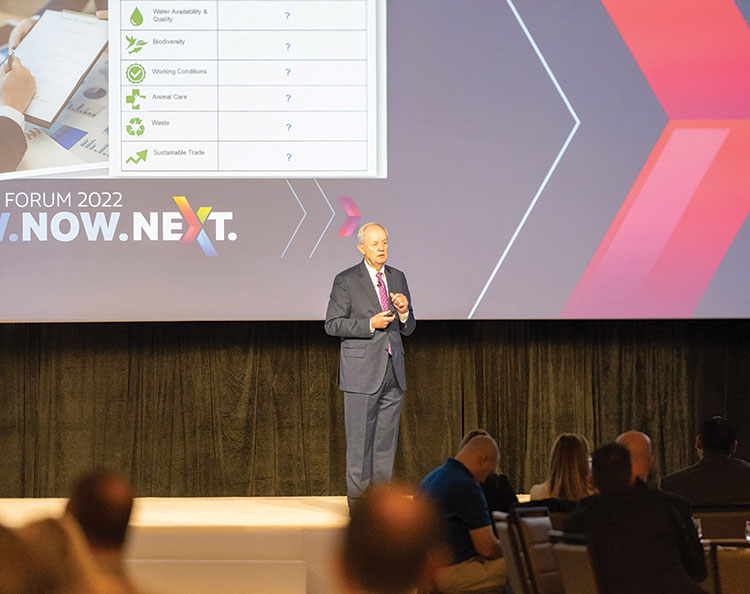 No metrics, no sale. “Sustainability is becoming a condition of sales,” said Michael Dykes. “Many members are telling me they’re already encountering that.”

Dairy demand is up. “The last two years have been the strongest on record. Per capita consumption is up 3 pounds,” said Michael Dykes in his opening comments to those attending the International Dairy Foods Association’s (IDFA) Dairy Forum. In making that statement, Dykes was citing USDA data indicating per capita consumption has climbed to 655 pounds per person.

“Now, we’re consuming dairy in different ways. We’re eating more of our dairy than we are drinking it. Butter has been crazy. Cheese is driving the bus. Fluid milk is declining, but dairy demand is increasing,” continued IDFA’s CEO and president at the late January gathering of North America’s dairy farming and processing leadership.

Going back to the decline in fluid milk production, Dykes pointed out that the U.S. dairy industry is exporting more milk in the form of dairy products than domestic consumers are drinking in the form of beverage milk. “This is relatively new in our dairy world, because 20 years ago or so, we weren’t exporting that much dairy,” continued Dykes, who began his career as a dairy veterinarian. “Export markets are extremely important to our dairy industry.”

“If you haven’t been on a dairy farm in the last five years, you would be amazed with the things that they are doing,” Dykes shared with the processor-heavy crowd. “We’re seeing innovation not just on the dairy farm, but also in a lot of different places. We’re seeing new investments in our industry and growth in our industry. Growth is so important to the processing industry as well as to the farming industry. Our producers want to grow,” Dykes continued in a discussion that was in sync with the conference’s theme of “New, Now, and Next.”

“We have seen about $2 billion invested over the last couple of years,” he explained, pointing to the screen displaying a list of dairy processing plant projects. “There’s approximately another $2 billion slated for the next three years. If we add up just the jobs on the chart, which again is not all of them, we’re nearly at 2,000 jobs. So, people are important, and people are going to be important to our dairy industry,” said the longtime marketing strategist.

As for the “now,” all those dairy products must find a home, and the supply chain remains snarled. To that end, IDFA created a supply chain task force that has two working groups — a port group and a land transportation group.

“We’ve been in discussions with the ports. We’ve met with Gene Seroka, who is the executive director of the Port of Los Angeles,” Dykes shared. “We’ve met with three shipping carriers, and we have five more carriers we’re scheduling meetings with the week after Dairy Forum.”

Dykes went on to say that CMACGM Group, a French-owned carrier, had shown the most interest in working with the group to develop creative solutions to get product to international destinations. The dairy industry also has been meeting with the Port of Long Beach and the Port of Oakland. Extended discussions have been held with the commissioner of the Federal Maritime Commission, USDA Secretary Tom Vilsack, and even the White House.

Equally important to resolving the snarled supply chain is trucking.

“We’re in a situation where I tell people that today a CDL is probably more valuable than a Ph.D.,” Dykes said of those in the workforce holding a commercial driver’s license. “Truck drivers, truck drivers, truck drivers,” he added, tripling down on the most important matter of moving dairy products for both within U.S. destinations and to ports for eventual international shipment.

“The damage done to the trucking industry during the pandemic will take some time to heal,” said Kai Bockmann, president and COO of Saputo, later in the meeting. “We have to be able to move products from inland locations to coastal ports.”

“Our industry will align our pricing model,” predicted Dykes. “I firmly believe that. I think our industry is coming together. We need a system that works for both farmers and processors, otherwise we don’t have a supply chain,” he continued, sharing that Marin Bozic and Phil Plourd would present their findings from a Federal Milk Marketing Order reform study commissioned by IDFA. The final report was 100 pages.

“Some will enjoy it. Some will not,” predicted Dykes. “We will take whatever we can get consensus on at the IDFA Economic Policy Committee, and we will take that forward.

“I think in this area, we’ve been afforded an opportunity that we’ve never had in dairy. This is a quote from USDA Secretary Vilsack,” said Dykes, pointing to the screen quoting a December Hoard’s Dairyman Intel article. “He’s saying, ‘Industry, get your heads together, think through the process, and come to me collectively with what you think is in the best interest of the dairy industry, and I’ll move it forward. If you guys can’t decide what’s good for your industry, don’t expect me to decide what’s good for your industry.’

“So, I think we have a tremendous opportunity ahead of us. If we can align on this, I think the U.S. can become, will become, the world’s dominant dairy supplier,” predicted Dykes.

One area that has changed a great deal as it pertains to federal orders is the Class I fluid milk category. “We’ve gone from 40% to 20% of the U.S. milk supply going toward fluid milk during the recent decades,” said Phil Plourd, president of Blimling and Associates, in discussing the paper on federal order reform. “The status is no longer stable in some federal orders. Some orders are at risk of going away,” added co-author Marin Bozic from the University of Minnesota. That risk of going away involves the small portion of milk destined for Class I and the lackluster incentive for other processors to pool milk in order to gain benefits from the Class I pool.

The milk marketing experts also made the case that the current structure limits innovation in the category. “It costs at least $150 million to launch a brand,” said Plourd. “In the fluid space, everyone knows someone’s cost to the fourth decimal space. Overcoming those slender margins is important.”

In addition to solving milk pricing issues around fluid milk, exports also garnered a great deal of attention. “In the next 10 years, we can find a home in domestic markets for all the new milk solids. However, in the next 10 years, we will need to find a home for 60% of the new skim milk solids production. That will involve exports,” projected Bozic in front of a standing room only audience. “New Zealand may be at peak milk. That means the world’s largest dairy product exporter may not be in place to significantly expand its milk production,” he said, alluding to the fact that the U.S. is in a better position to fill future market export orders.

The paper provides options to modernize milk pricing but stopped short of making final recommendations to the industry.

“We provided all the ingredients to modernize milk pricing in the paper. Like a good chef, it’s up to the industry to take those ingredients and create the right recipe,” concluded Bozic.