These young farmers have an eye on the future 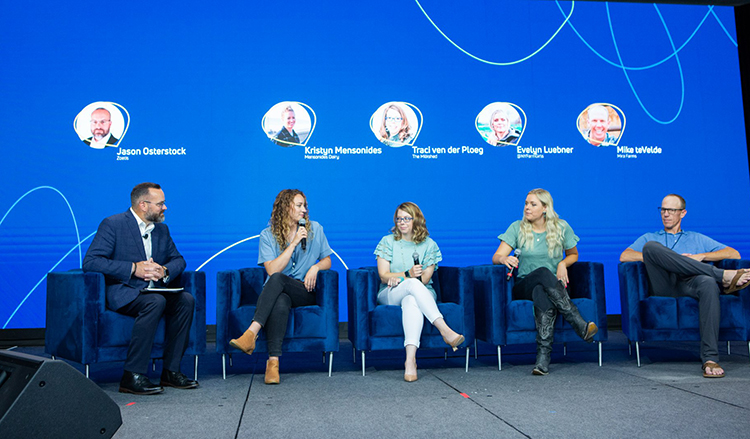 “I just want to be able to leave it better than it was yesterday.”

Kristyn Mensonides shared that quote about her farm during a panel discussion of young farmers at this year’s Connect Summit, but each of the producers sitting on stage with her illustrated the same sentiment as they described their farms and the ways they are working to move them into the future through processing, technology, people development, and connection.

Mensonides manages both the cows and people at her family’s dairy in Washington, and when she looks toward new efficiencies for the farm, she keeps employees top of mind. She wants new technologies to be easy to train people on, but more importantly, she wants her team to be part of the decision-making process.

“We can get caught up in thinking we’re the boss,” Mensonides said. The reality is that the tools must be useful for the people implementing them to work well, so she encourages development of the farm by ensuring all of its members feel valued.

For Mike teVelde, leaving the dairy industry better than it was involves using data from his cows to improve his business. A self-described nerd who studied computer science before ending up back in agriculture, teVelde brought activity monitors to his family’s Mira Farms in Colorado because, “If we’re not getting more efficient, we’re getting less efficient.”

TeVelde knows, though, that technology for the sake of technology is not useful for the farm or valuable to his employees. He focuses on information that provides actionable insights for the dairy, and like Mensonides, he is sure to communicate that value to the people who carry out the tasks every day. It’s about making the people around him smarter, he explained.

Panelists Traci ven der Ploeg and Evelyn Leubner described that the future of their farms is connected to sharing their business and products with their consumers.

Ven der Ploeg farms with her husband’s family in New Mexico, and last year they opened a coffeeshop to market their milk, yogurt, and butter as well as other regional products. “We didn’t want to go big in one thing,” ven der Ploeg said, describing that they instead wanted to be able to offer their community a variety of local foods — including plenty of dairy.

The diversification has been very beneficial for ven der Ploeg and her husband as they looked to add something of their own to the family’s farm, she shared. And she views coffee as a useful way to reach customers with their local dairy products and the story of their dairy farm, creating an opportunity for conversation.

The operations of Leubner’s family farm in New York are regularly shared with consumers of all types through the social media channels she and her two sisters run, @NYFarmGirls. The farm also hosts a pumpkin patch in the fall, and she said that is another great opportunity to connect with people unfamiliar with farming.

The oldest of the three, Leubner has been back on the farm after college for a year and a half now and is excited to keep bringing that education to the operation. Her goals are to continue advancing the operation to something her family can be proud of, she said, and her advice for creating change was to be consistent in presenting new ideas.

Although they use slightly different approaches, Mensonides, teVelde, ven der Ploeg, and Leubner all illustrate the innovation that young dairy farmers are using to ensure their operations can thrive for them and beyond. That vision is what’s necessary to leave their businesses better than they found them.