Think beyond corn silage and alfalfa

The author is an assistant professor in the Department of Animal Science at Iowa State University. 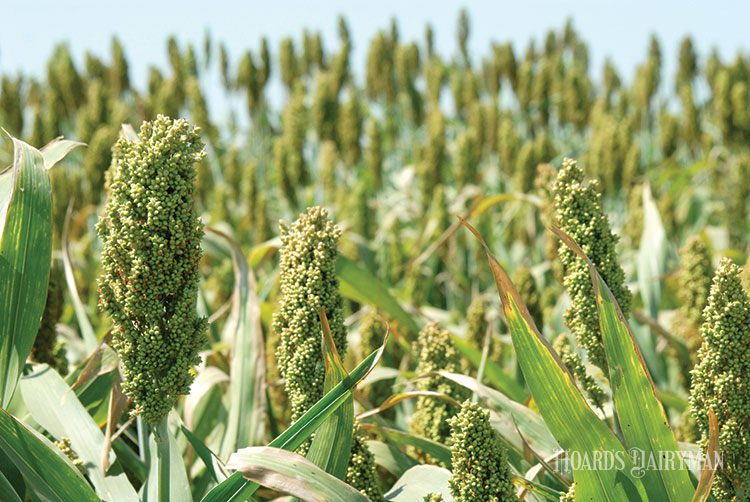 Match alternative forages with the nutrition requirements for animal groups to maximize value.

Forages are the foundation of a strong dairy feeding program, and if utilized correctly, alternative forages can provide flexibility and high-quality feed. Considerations when using alternative forages was a discussion topic at a Virtual Dairy Nutrition and Management Series panel.

Alternative forages can maximize land utilization and reduce input costs for feed. According to the University of Georgia’s John Bernard, there are a number of reasons why a dairy producer may want to consider alternatives to corn silage and alfalfa, the so-called “King and Queen of Forages.” These include limited water availability, delayed planting, alfalfa winterkill, flexibility in crop rotation, and the ability to maximize land use on fields with poorer soil.

These alternatives allow farmers to maximize their forage inventory, which is a critical component of a profitable feed program. Currently, approximately 47% of the milk cow inventory in the United States is in drought areas, indicating that alternative forages will likely play a larger role in dairy nutrition.

Maximizing overall farm profit means optimizing both crop and cow profitability, according to Juan Castro of Dairy Visions LLC. This will include considerations of long-term constraints such as water usage. The impact of alternative forages on income over feed cost (IOFC) will depend in part on the price of commodities like corn.

As Virginia Tech’s Gonzalo Ferreira pointed out, while alternative forages are often cheaper per unit of dry matter, they may result in changes in feed intake, milk yield, and component yield. Therefore, from a financial and nutritional perspective, the best alternative forage will be the one that allows the nutritionist to formulate the lowest-cost diet that meets an animal’s requirements for optimal productivity, continued the dairy specialist.

It is good practice for a producer to meet with their advisory team regularly, and gathering input from farm advisers — especially agronomists and nutritionists — is recommended before adopting alternative forage strategies. Important considerations include labor availability during planting and harvest windows; how the forage fits into the cropping system and feeding strategy; yield, quality, and cost of production; and options to store forage inventory.

Selection of winter and summer annuals depends on several factors. As USDA’s Wayne Coblentz discussed, winter annuals have an absolute requirement for vernalization, meaning they must have a cold exposure in order to flower. For many areas, having adequate moisture in winter to grow winter annuals is not a concern, according to Bernard. However, harvest may become a challenge when the spring is too wet for timely field operations.

Generally, if land is irrigated, water efficiency is improved in winter forages because there is less evaporation loss during the winter months. Compared to corn, summer annuals such as sorghum and millet have the advantage of producing greater yield per acre with less water in drier environments. These alternatives may be used to raise forage production in areas with limited water supply.

Fall or early spring establishments can have the advantage of allowing for a subsequent crop of corn or soybeans, depending on location. For example, fall-established triticale would hit boot stage around Memorial Day.

In Northern states, another option could be to remove old or stale alfalfa stands early and then plant oats. Forage-type small grains such as oats mature more slowly than grain types, and thus may be preferable with earlier planting dates or later winters.

Base harvest decisions on crop maturity rather than calendar date. According to Bernard, small grains in particular tend to have more variation in neutral detergent fiber (NDF) digestibility compared to corn silage, and some of this variation is due to maturity at harvest. When evaluating the ideal maturity at harvest, producers should consider how much of a yield reduction they are willing to accept, since greater maturity will result in greater forage yield but lower quality.

For the triticale example used by Coblentz, waiting for a soft dough stage results in higher yield but a later harvest, likely early July. At the soft dough stage, grain fill converts sugar in the stem to starch in the grain head, resulting in an overall reduction in the NDF levels.

A boot stage harvest is generally recommended for lactating cows because this strikes a balance between forage yield and digestibility. Alternatively, for pregnant heifers with lower energy requirements, a later stage may be more desirable and could better capture yield advantages and appropriate nutrient profiles.

Adequate inventories of quality forages are an important component of a profitable dairy farm. Any forage can be useful, depending on where and how it is utilized on farm. For example, feeding a late-lactation maintenance ration can give producers the opportunity to segregate lower-quality forages to animals when matching nutrition requirements. Just like with conventional forages such as corn silage and alfalfa, feeder compliance and minimizing shrink are critical for effective feed management.

It is possible to balance rations with alternative forages that are comparable to corn silage and alfalfa-based diets, especially in post-peak cows, assuming the diet has been balanced for differences in NDF and starch. According to Bernard, winter annuals have higher NDF and crude protein compared to corn silage but usually do not have appreciable levels of starch, so additional rapidly fermentable carbohydrates will be needed to compensate.

Feeding steam-flaked or high-moisture corn instead of dry ground corn can improve the available starch in rations that include these lower-starch forages. In fresh cow diets or in other situations where NDF may be limiting intake, feeding brown midrib (BMR) hybrids may be another option to maintain production. According to Ferreira, when using a BMR hybrid, digestibility is enhanced compared to conventional hybrids within species, but not necessarily in comparison to other forage species. For example, conventional corn silage has a lower lignin content than BMR sorghum silage. Another issue to consider is that some alternative forages will have anti-nutritional factors, such as nitrates or prussic acid in stressed sorghum.

Given higher feed and fertilizer costs, as well as growing concerns for water and land utilization, alternative forages can be a promising tool for the dairy producer. Management factors will play heavily into whether alternative forages will work on a given farm; however, with proper planning and implementation, they can be useful additions to many dairy feed programs.

A look back and a look ahead
Features
Related to:
features, corn silage, alfalfa, forage, crops
In Features

Don’t let injuries get you down
By Gail Carpenter