The author is a trainer and consultant with Vetvice and one of the founders of CowSignals in the Netherlands. Good stockmanship skills can be learned and trained. The reward is huge: calm cattle to work with, less foot health problems, more milk, and fewer incidents and injuries.

Perhaps this is common knowledge to all of you reading this, but it is worth repeating: It pays to invest time in low-stress stockmanship.

First of all, cattle that are given clear directions and are handled in a gentle manner will stay calm and react in a predictable way. This almost always means that the work goes faster, because of better cow flow and less incidents.

Secondly, farms with low-stress routines and facilities have far fewer injuries for both the animals and the people. A common injury of cows caused by unrest, negative stimulation, and sudden movements are hoof bruisings. These are hemorrhages of the sole and white line that can end up as ulcers. People can get injured by cattle in many ways. Think of kicks, head bumps, or being squeezed between a cow and something hard.

A third incentive is a gain in production, or even better, the absence of a production reduction. This assumption is not strongly backed up by scientific evidence, but one study found a higher milk production of approximately 3 pounds, which is probably explained by more complete milking out in the parlor.

Positive effects might also be found around calving and during the fresh cow period. At this time, cows are regularly handled by people, and it can be assumed that a higher level of stress has negative effects. Good stockmanship practices also add to social comfort of the cows, like ensuring that they stay in contact with herdmates.

Perhaps the most important reason to practice good stockmanship skills is this: people who enjoy and feel secure in their work with cattle will interact in a positive way with the animals. Because of this friendly, clear, and patient behavior of their caretakers, the animals will become more relaxed, predictable, and friendly. This gives the people more comfort and joy in their work. There is a positive circle, with reinforcements along the way. 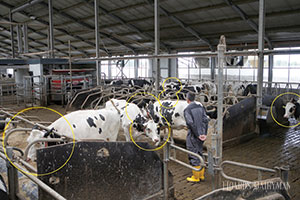 Each yellow circle shows a cow reacting to the person quietly walking through the pen. Every time you are close to cows, they see you, react to you, and are learning.
On the other hand, people who feel insecure and do not really enjoy their work more often interact in a negative way with the animals. They are more likely to yell and hit cattle and to show frustration in other ways. Cows and young stock that are handled like this will become more shy and are more prone to show unpredictable, if not aggressive, behavior. Having to work with fearful, shy, unpredictable, and perhaps aggressive cattle will further reduce the fulfillment, comfort, and satisfaction of the people. This leads to a negative, vicious circle.

Aggressive handling of animals can be caused by many reasons. First there is the “unconscious incapability” of the person doing this. The person thinks this is the way to handle cattle; perhaps he or she has seen other people doing it this way.

Rough handling can also have frustration and alienation of the work as a causative factor. This can be someone who struggles with how to do things the right way under the circumstances or has no good idea of what he or she is supposed to be doing. Maybe they are the wrong person for the job.

The good news is that people can learn to handle and work cattle in a safe and positive way. Training and coaching are effective.

The basics of stockmanship

Good stockmanship starts with understanding that each cow or calf can make decisions and learn. It needs to learn, first of all, that people are safe company. Only after that can it learn how to be led. In other words, the animal needs to learn what to do when you signal it to do something.

Let’s start with the mature cow. The cow is a heavy, long, rectangular object standing on four high legs that follow its head. The position of the head tells you where the cow will go, and you should work with that.

You lead the cow by giving it commands and signals on what to do, working on its natural behavior as much as you can. Do not herd a cow by scaring it and chasing it.

A cow must feel safe to learn and to behave as expected. This is shown by the position of its ears and head. In general, both ears in one direction means the cow is focused and confident. Ears in different directions tells you that the cow is hesitant. A head held low means confidence. A head up high is a sign of distress. Always strive to keep the heads down.

The next thing to teach the cow is to move when you want it to move. The principle is simple and is called pressure-reward. First, you give the cow a signal by putting pressure on it. This pressure consists of you walking toward the animal at a certain angle and at a certain speed. Angle and speed decide how much pressure the cow experiences and how it will react. When the cow starts moving, you give it a reward by stepping back and removing the pressure.

To use the pressure-reward concept, you should be aware of the fact that each animal has a comfort zone in which it feels safe. The moment you enter this zone, the animal feels pressure and will move away to get you out of its safe space. When standing at the edge of this zone, you can subtly give pressure by stepping toward the animal and give a reward by stepping back. This area is also called the pressure zone.

The size of the zone is decided by the relationship the animal has with people in general and with you specifically. If the animal feels safe and comfortable, this zone is small and you can come very close.

Practice these concepts with your cattle and convey them to your staff. New cattle on the farm, young stock, and new staff members need extra training and time to learn the basics. Cattle learn very fast, especially when their herdmates are comfortable and show the right behavior. It takes more time to teach people to handle cattle in a low stress way. 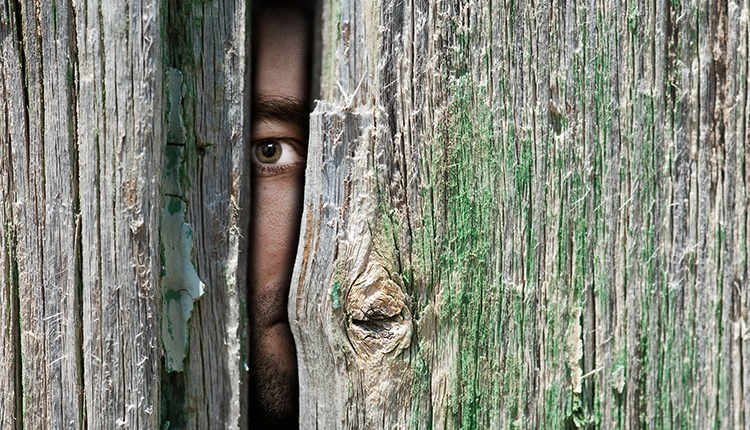 Editorial: Depooling needs to be in the conversation pool
Features
Related to:
features, animal care, animal welfare
In Features