Setting a standard of excellence

Not even a blizzard could keep the trailers away from the aptly named Four Winds Farm in Hartland, Wis., on March 26, 2011. The hundreds of plaques and banners decorating the shed easily confirmed why this die-hard crowd was so willing to stand the cold that sale day. Over the years, Four Winds' owners, Clark and Joy Vilter, have gained a sterling reputation for breeding awe-inspiring Guernseys.

The Vilters are nothing less than an icon when it comes to breeding accomplishments in any breed, having earned 281 All-American nominations with a remarkable 149 being homebred. Members of the Four Winds herd have been selected as National Grand Champion 17 times, 11 times being homebred.

A household name in dairy circles, Westlynn Tom Dee, the farm's first national Grand Champion, is celebrated among all breeds as one of only a few cows to win four or more Grand Champion titles at World Dairy Expo. That's not all. Led by Four Winds Magicman, a five-time Premier Sire at World Dairy Expo, the Four Winds prefix ranks fourth all-time among Guernsey sires for All-American nominees.

In 1998, Clark was chosen as the 57th winner of the Klussendorf award, the nation's highest showing honor. He also served as a leader to his peers as the president of the American Guernsey Breeders' Association and Klussendorf Association. In addition, Clark and Joy have tirelessly supported youth and gave many young showmen their start by showing Four Winds cattle.

It was a difficult decision for Clark to hang up the milkers and sell out his herd in 2011, but he knew his health wouldn't allow him to continue milking much longer. Despite their decision to leave the industry, the Vilters' impact on the Guernsey breed and showing community has set a standard of excellence for years to come.

What were the keys to your herd's success during the 28-year run since your first All-American nomination in 1983?
First of all, having an understanding and very helpful wife. Without Joy, I could not have accomplished any of this. My three children, Tim, Tina and Jim, were also always a big help. The support of my family was key to my success.

The second ingredient would be a little bit of luck. Once in awhile success comes from what you have accomplished, but other times it comes from luck. Sometimes I was just in the right place at the right time with the right animal.

Our breeding program probably helped us quite a bit, too. We bred for type and we fed and managed for production.

Explain why your herd transmitted so well for other breeders.
We are firm believers in cow families. Having said that, it comes down to using the right bull on the right cow. We never did subscribe to the theory of going the index route. We bred more for animals that suited us, and I guess we got lucky in that respect. I wanted a cow that would last for a number of years. They had to have good udders, good feet and legs, and have some strength along with dairy character. We weren't necessarily out to set a national class-leading record but the cow had to be profitable.

Of Four Winds' 17 National Grand Champion titles, which one was most memorable?
Probably the first time that Westlynn Tom Dee was Grand Champion at a national show. She was a once-in-a-lifetime cow. Tom Dee was the first animal that we ever showed that was a national champion. We didn't breed her. We purchased her as a 2-year-old.

Tom Dee put us on the map, so to speak. She was 4 years old the first time she won. She won four times in Madison at 4, 5, 6 and 7 years of age. I know the last year that I showed her my daughter, Tina, said I was nuts to take her out and risk it. That conversation firmly rings in my mind.

What made Tom Dee so impressive as a cow and so successful as a transmitter?
She transmitted like no other Guernsey cow had. There have been cows of other breeds that surpassed her. But she transmitted the most reliably of any Guernsey cow that I am aware of.

In the beginning, her overall balance attracted me to her. She had a beautiful udder, beautiful front end and beautiful feet and legs. When she was offered to me, it was one-third ownership and I had to care for her. When I saw her for the first time at World Dairy Expo, it took me all of three seconds to decide I would rather own part of her than look up at her in the show ring the rest of my life.

What unique aspects do you appreciate about the Guernsey breed?
At one time, I milked a few Holsteins and I found that Guernseys are more docile when comparing the two breeds. Guernseys are also more heat tolerant. They are probably more energy efficient because even though some of the Holsteins milked more, I also had to clean-up an awful lot behind them and they ate more. The bottom line was we probably made more money with the Guernseys.

What do you think needs to be improved within the Guernsey cow to make her viable long-term in our industry?
We need to improve the feet and legs overall in the breed, and we also need to give the breed more overall strength so they can more efficiently make milk. If you have a narrow front-ended cow, chances are she's going to be narrow in the rear end. And I have yet to see a cow make a lot of milk out of a narrow udder.

Four Winds Farm has received much recognition over the years, what achievement do you think has been the highlight?
It is hard to select just one highlight. The two at the top of my list are when the Klussendorf Association elected me to be part of that group and receiving the Master Dairy Cattle Breeder Award from the American Guernsey Association.

The Klussendorf Award is for what I accomplished in the show ring, while the Master Breeder is for accomplishments over the years breeding cows. The Master Breeder Award was given to me and my wife, Joy, because without the help of Joy and my kids, it wouldn't have happened.

Did some of the previous Klussendorf winners serve as your role models?
Yes. When I look at that list of winners I think, "How in the world did I get there?" As a kid, I would read the list of winners and was just in awe of the names. Some of the people I knew and some of them I didn't. Of the ones I knew, I thought, man, that's the upper echelon. When they put my name on there, I think it came down a bit.

When I was a boy, I remember going with my dad to Olaf Kjome's (1937 winner) farm. He drove us around out in the field with a pick-up truck to look at his cows. I also looked up to Lew Porter (1969 winner). Another Guernsey breeder, Myron Lancaster (1983 winner) is someone I looked up to.

Through your leadership roles over the years, what things have you learned?
First of all, I found that I needed to be a good listener. Secondly, I needed to approach issues impartially until I knew all the facts and figures and the ramifications of a decision. If my peers elected me to a leadership role, I tried to do the best job I possibly could.

When the American Guernsey Association decided to reestablish a sale at World Dairy Expo, you put a first choice of Tom Dee in the sale and Forhar Magic Show that you owned in a three-way syndicate. What caused you to make that kind of commitment to that sale?
We are strong believers in the Guernsey breed, and we wanted to showcase it. There isn't a better place than World Dairy Expo to do it.

Why have you been such a strong supporter of youth?
There is no future in the dairy industry without our youth. I am not the future, I'm at the tail end. I have always believed that the youth are the future of the dairy industry and we need to give them support and guidance.

What advice would you have for a young person entering a career in our industry?
If they work hard at it and are honest, they'll have a very rewarding career. I'm glad I made my career in the dairy industry.

What caused you to hang up the milkers?
Although I did have really good help the last couple years that I did farm, I had some health issues. I wore a knee brace for the last two years I milked. A couple months ago, I had a total shoulder replacement in my right shoulder. Everything that I had to do above my head I had to do left-handed, and as a right-handed person this made milking very difficult. Joy convinced me it was the right choice to sell. I didn't want to, but some days age catches up with you and you have to face the facts.

You had an outstanding sale and cattle went to many states. Talk a little bit about that day.
We couldn't have planned a worse weather day for the sale. We had a blizzard and it was cold and windy. We were told we had 700 people here for the sale and that still blows my mind. I was also told that in the trailer parking lot there were 32 trailers and cattle went into 16 different states. I didn't realize that many people would come. I was just blown away by the amount of people. For that I say a big thank you.

Your Guernsey cow Charity was proclaimed "Cow of the Year" by the Wisconsin governor. What can you recall from that day?
Governor Thompson gave a long speech since it was an election year. Charity got a bit impatient during the long talk, so she swung her head around and hit the governor! He didn't go down but he moved. The crowd laughed. Governor Thompson quickly wound up his speech. It was 10 to 15 minutes too long and he was holding the show up. It was right before her class. We didn't plan it but it kind of wrapped things up for him.

Rumor has it some junior members encouraged you to ride a roller coaster during a Guernsey convention. What prompted you to hop on?
I'm still trying to figure that one out. What possessed me on that day I have no idea. Thinking back, I'm glad I did because those young ladies have gone on to become very prominent youth in the dairy industry. I don't think a roller coaster ride convinced them to do that, but I'm glad to know and associate with them. And don't ever look for me to do it again!

A household name in the dairy community, Westlynn Tom Dee was Vilter's first National Grand Champion. From the moment he saw her, Clark knew he wanted to be the one leading her into the ring.
Return to Hoard's at Expo homepage
Related

It was all purple for the Red and Whites
Hoards at Expo
Related to:
HAE, WDE, shows, Guernsey, Expo people
In Hoards at Expo 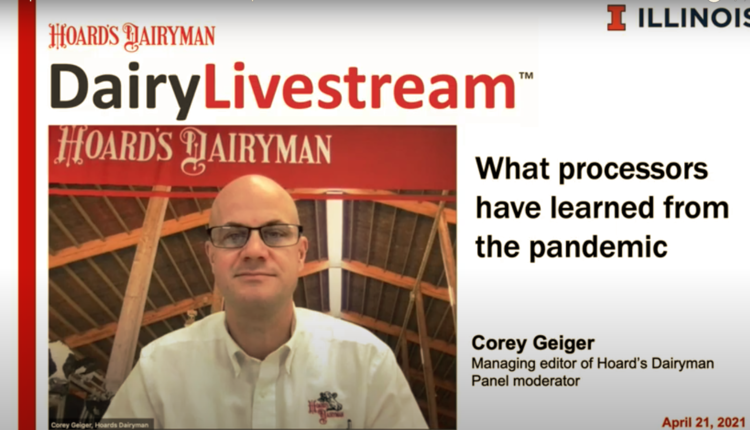