Global exporting giant ramps up its production capacity to serve huge nearby markets. 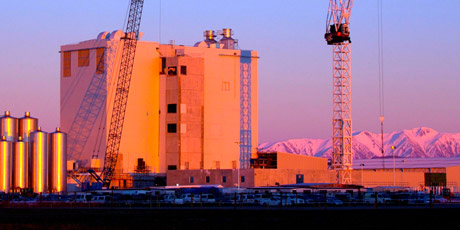 The. U.S. is the hot new star in the global dairy exports game, but New Zealand, the all-time everything, hasn't slowed down. Not at all, in fact.

Last weekend, exporting giant Fonterra officially dedicated the world's largest milk powder dryer, located in its first new facility in 14 years. The dryer's massive scale speaks volumes not only about Fonterra's opinion of the world's current and future demand for dried dairy proteins, but also its commitment to its biggest markets: southeast Asia and China.

The new plant (pictured above) is located in Darfield, Canterbury, a farming region on the south island about 30 miles west of Christchurch. It currently produces about 1.5 million pounds of dried protein powder per day. Fonterra says that at the plant's full design capacity, it will be able to process just under 5 million pounds of milk per day.

The decision to site the plant on the remote south island (it's where the Lord of the Rings movies were filmed), not only signals a huge long-term commitment to dairy producers in the region, but also acknowledges a modern reality that dairy producers in the U.S. can identify with: cow numbers are growing where human populations are not, and processing plants are best advised to go where the cows are.

New Zealand has the same number of dairy cows as people - 4.4 million. Over three-fourths of the people are on the north island, while almost 40 percent of the milk is on the south island. The Canterbury region is the fastest growing dairy area in the country and has the biggest and most productive herds. It is currently home to more than 800,000 cows (about the same as Minnesota and Michigan combined) and just over 1,000 dairies.