Efforts of the farm staff were recognized last weekend at the American Guernsey Association's annual meeting. 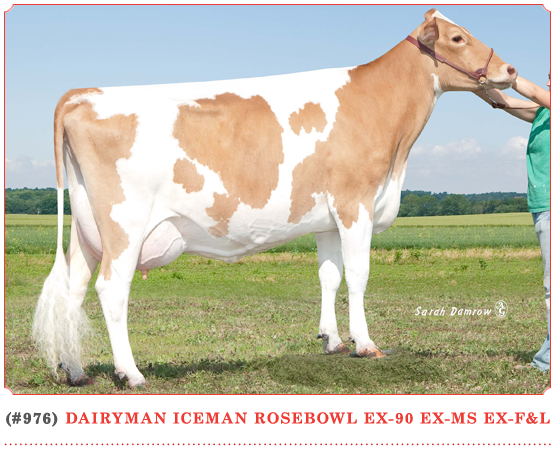 Fort Atkinson's historic Hoard's Dairyman Farm was recognized by the American Guernsey Association for having 28 of the 100 top Guernseys nationally for milk and components production. The Association reviewed the farm's 147 Guernsey lactation records in 2013 to make its ranking.

Of the 28 award-winning cows at the Hoard's Dairyman Farm, Dairyman Iceman Rosebowl was recognized as the best of the best by being named the nation's highest-producing Guernsey cow. The American Guernsey Association's formal name for these elite cows is "Component Queen."

"As specialty cheesemakers, we appreciate the high-quality, high-yielding milk from the cows at the Hoard's Dairyman Farm," said Lindsey White of Torkelson Cheese. "The high protein and butterfat provide excellent ingredients to make our world championship Brick, Muenster and Quesadilla cheeses."

Rosebowl comes from a long line of cows that called the Hoard's Dairyman Farm home. Rosebowl's six immediate dams or mothers all bear the historic "Dairyman" prefix originally created by Governor W.D. Hoard when he purchased the farm in 1899. In 1977, the U.S. Department of the Interior recognized the Hoard's Dairyman Farm for its impact on the nation by placing it on the National Register of Historic Places.

In addition, the hard work and dedication of Jason Yurs, farm manager, and the entire farm's staff were recognized by the American Guernsey Association with several additional awards at its 137th annual convention.

The farm was the No. 2 production herd in the nation for pounds of milk with a 21,619 pounds per year herd average on the 147 completed lactations by the farm's cows. This average also secured the farm as the No. 1 herd with more than 50 cows. Additional production awards brought home by the farm were the No. 2 protein producing herd at 737 pounds per cow and the No. 4 butterfat producing herd at 995 pounds per cow.

"The Hoard's Dairyman Farm is designed to be a practical example of how dairy farms implement best farm practices and cow care," said Brian Knox, President of W.D. Hoard and Sons Company. "Jason Yurs and his entire staff have really hit the ball into the upper deck, and it's good to see national recognition."

The herd ranked No. 25 in the nation for the herd's top-caliber genetics. Even more impressive, three of the farm's cows were also honored on the 2013 Living Lifetime list. This award recognizes cows that have stood the test of time recording high production and component scores.

The author is the 26th Hoard's Dairyman editorial intern. This fall she will be a senior at Kansas State University in Manhattan, Kan. At KSU, Maggie is double majoring in agricultural communications and journalism and animal sciences and industry. Seiler grew up on a 130-cow registered Holstein dairy in Valley Center, Kan., near Wichita.
Related

Make the most of your assets
HD Notebook
Related to:
HDN, farm, Guernsey
In Farm Blog