One pound of milk per cow per day over your entire herd really adds up over a whole year. In his Monday, July 14, webinar, Mike Hutjens, University of Illinois, provided multiple ways to boost milk production or cut expenses to gain additional income. In the webinar titled "Finding the next five pounds of milk" his suggestions were aimed at garnering additional production per cow per day and other ways to improve margins.

Cow Comfort
Cows need to be kept comfortable during the warmer months of the year. Not only does hot weather sacrifice milk production, it also impacts calf health and production potential of the resulting calf.

Five years of USDA data show that July is consistently the lowest month for butterfat and protein percents. Hot weather takes its toll, and it is important to minimize summer slump by carefully evaluating your rations. Hot weather also makes it more challenging to get cows to show heats and breed back. And as the age at first calving is stretched beyond your ideal, it costs additional feed for a heifer that should be earning her keep in the milking string.

Feeding
He pointed out that there is no substitute for high quality forage and he cautioned about feed shrink. "Shrink levels of 8 percent are typical, but they can be lowered and save money," shared Hutjens. He mentioned new developments in managing shrink, including oxygen barrier bunker covers, silage inoculants, vertical grain storage and mixing the ration indoors.

Most feed additives show positive rates of return. Ones to consider include buffers, yeast, monensin, biotin and rumen-protected choline.

Look at your milk urea nitrogen levels, if available. "MUNs should range between 8 to 12, but aim for 9 to 10," encouraged Hutjens, "Feed savings can be captured."

Calves
Getting more milk starts long before cows enter the milking herd. Research has shown that calves fed an accelerated plane of nutrition, prior to weaning, produced an additional 1,100 pounds of milk in first lactation.

Cow Strategies
It can pay to group cows by lactation. Trials show that first-lactation cows produced about four more pounds of milk each per day when in a group by themselves. That was with the same ration. If you can get more milk with the same ration, it is an option that really needs some consideration.

Lameness can rob you of 5 percent of production, and in high-producing herds, that adds up. "Cows do not have to be (noticeably) lame to realize production loss, even those that are 2.5 to 3 for lameness scoring are affected."

Hutjens' take-home points are shared in the chart. 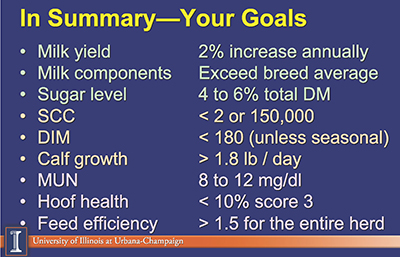 "Take a look at your farm and make a list of where you stand," instructed Hutjens, as he stressed that not every suggestion would work on every farm, but many would be applicable on most farms.

The July presentation was brought to you by Ag-Bag, a Miller St. Nazians Inc company. (www.ag-bag.com) This July webinar is archived and available for viewing. Past webinars can be found at www.hoards.com/webinars.