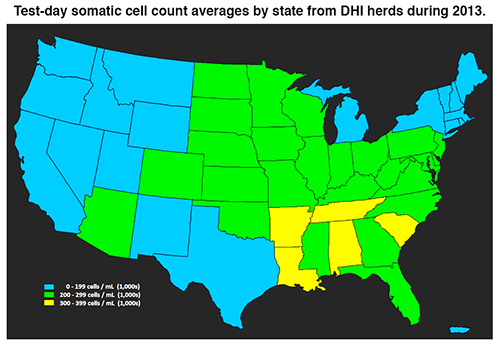 Slowly but surely, the average quality of U.S. milk is becoming amazingly good.

In 2013, for the 12th year in a row, the nationwide average somatic cell count (SCC) for all cows on Dairy Herd Improvement testing dropped to another new all-time low - this time to 199,000, according to the Council on Dairy Cattle Breeding.

Twenty-six states had lower SCC averages in 2013 than in 2012, while 20 states had higher averages.

Report authors H.D. Norman and L.M. Walton say the steady decline has likely been influenced by the more restrictive European Union standards that are being forced upon many U.S. dairy producers. They add that genetic selection is likely to contribute more to future improvement in milk quality than in the past.


The report also shatters the myth that smaller herds are supposedly better when it comes to milk quality and/or production per cow: The Council on Dairy Cattle Breeding's full report on SCC averages by DHI herds during 2013 can be seen at

I am one biased farmer
HD Notebook
Related to:
HDN, milk quality
In HD Notebook